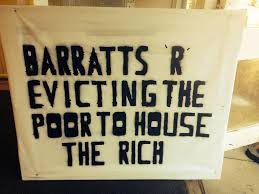 The Public Inquiry into the West Hendon development has started. The Guardian has carried an article outlining the arguments that Barnet Council are engaged in the social cleansing of the estate LINK

There will be a meeting at the Marsh Drive Community Centre on the estate at 2pm on Thursday afternoon and then a procession to Barnet Town Hall.

This is an update received from Barnet green party member Ben Samuel:

Now is the most crucial time to stop the West Hendon development since the "lake side" phase 2 Public Inquiry opened yesterday and will continue for 8 days.  We started with broad principles and the promoter's case.  Then objectors including myself will have the chance to read out their evidence and questions will be asked.  All the papers are on www.west-hendon.co.uk and the evening session we are told will go ahead between 6 and 9 p.m. this Thursday.

Please come to Thursday's afternoon of action starting with a guest talk at West Hendon's Marsh Drive Community Centre booked for 2 pm.  We'll then process to the Town Hall.

After the statement of case by the expensive QC Neil King, who characterised objectors as mere protesters not with a serious plan, we heard form Martin Cowie from Barnet Council, and his developer partner who seems to be his boss.  Cllr Adam clarified the Council's claim that there were no non-secure tenants in 2002 even though we'll hear next week that there were.

They cited s.13 1974 Misc provisions Act, 2004 circular on policy and Equality Act to create "an inclusive place for all sections of the community".

They explain the long delay in phase 3 as due to changes in market conditions but Adam made Barratts promise not to lower the % affordable from 25% which includes shared equity.

This is a message received later this afternoon about tomorrow's (Thursday) meeting and march:

JOIN US FOR AN AFTERNOON OF HOUSING ACTIVISM TOMORROW (THURSDAY) 2pm

we will be joined by the Women from The New Era campaign, speakers from the Our West Hendon Group, Radical Housing Network , Unite The Union and other estates in Barnet.;
where we will make a noise and voice our objections to the social cleansing of West Hendon and London wide.
Posted by Martin Francis at 12:05:00

Thank you, Martin. This is diabolical and makes Brent look like a bit of a good time.