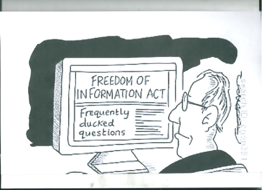 On 21st January  I received the following from Brent Council HR department.
‘The requested information is exempt from disclosure under Section 40(2) of the
Freedom of Information Act (FoIA).  The information is personal data as defined by
the Data Protection Act 1998 (DPA). As it is information about individuals, we are
unable to give this to you; release of this information would constitute a breach of
Principle 1 of the DPA. Principle 1 states that personal data shall be processed
(used) fairly and lawfully and, in particular, shall not be used unless at least one of
the conditions in Schedule 2 of the DPA is met; in this case none of those conditions
have (sic) been met.* This response therefore acts as a refusal notice under section 17 of
the FoIA.’

* I would welcome opinions on this. AT
Obviously, my request for the total number of Rosemarie’s votes was not made out of idle curiosity; we all know that the response to the ’Vote for Rosemarie’ idea was overwhelming with Civic Centre staff and members of the public expressing  their solidarity with Rosemarie and their admiration for the way she had conducted herself in the face of what a British court has adjudged was Cara Davani and Brent Council’s racial discrimination, victimisation  and constructive dismissal. The online vote she received was massive. Nor was it my intention in any way to detract from the achievements of the other worthy winners of Brent Staff Achievement  awards.
However, the Council leadership’s mean-spirited response to the avalanche of votes for Rosemarie seems to me a missed opportunity for Butt, Gilbert and Davani finally to concede that those voting for Rosemarie possibly had a point; that Civic Centre staff and the public generally support Rosemarie for principled and valid reasons; and that an employment tribunal judge’s opinion possibly carries a little more authority than that of a small cabal of mutually back-scratching and terminally compromised senior managers  and local politicians.
Posted by Martin Francis at 14:01:00

Appeal as its not personal information it is the result of a competition that was run using tax money.

The important points were all made by the response of people voting. We don't need to know the numbers, we already KNOW the numbers.

Has AB(CD) been spotted yet? We all know what happened to FL when she went AWOL.

Appeal to the Information Commissioner

Cara Davani should be attending the General Purposes Committee meeting at 6pm on Thursday evening, 29 January, as she has two reports to present to that committee (after Michael Pavey has made his report on his review of HR and Equalities procedures and practice).

The HR Director's first report is about Stress, and readers will be pleased to note that her guidance includes that, in order to protect Brent's employees from stress:
'Line managers will ... ensure that bullying and harassment is not tolerated.' (extract from section 5.2 of the new stress guidance).

Pavey's report will be about how HR can be improved (ie 'going forward').
I don't want to put ideas in Pavey's already-crowded head, but would it not compound and complete the whole Alice in Wonderland fiasco if he cited the passage you quote from Davani's new stress guidance as an example of the way that past issues have been addressed, lessons learned, lines drawn etc and the estimable head of HR is passionate about driving forward etc into a new culture of etc etc bullshit bullshit etc.

I heard someone reading it in the office and I just cracked up laughing. The bully telling people bullying will not be tolerated. You cannot make it up

Nice if Davani/Gilbert/Butt/Pavey could be asked:
1. How will this denial of tolerance be manifested by Brent Council ? What will happen to those who bully and harass?
2. Will this be retrospective? What will happen to those who have already been found guilty (possibly, but not necessarily, in a court of law such as an employment tribunal) of bullying and harassment?
3. If evidence can be provided of harassment and bullying ( for example, but not necessarily by the verdict of a judge in a relevant court, the most relevant obviously being an employment tribunal) can we be confident that appropriate action will be taken which reflects, support and lends credibility to the statement that 'bullying and harassment is not tolerated'?