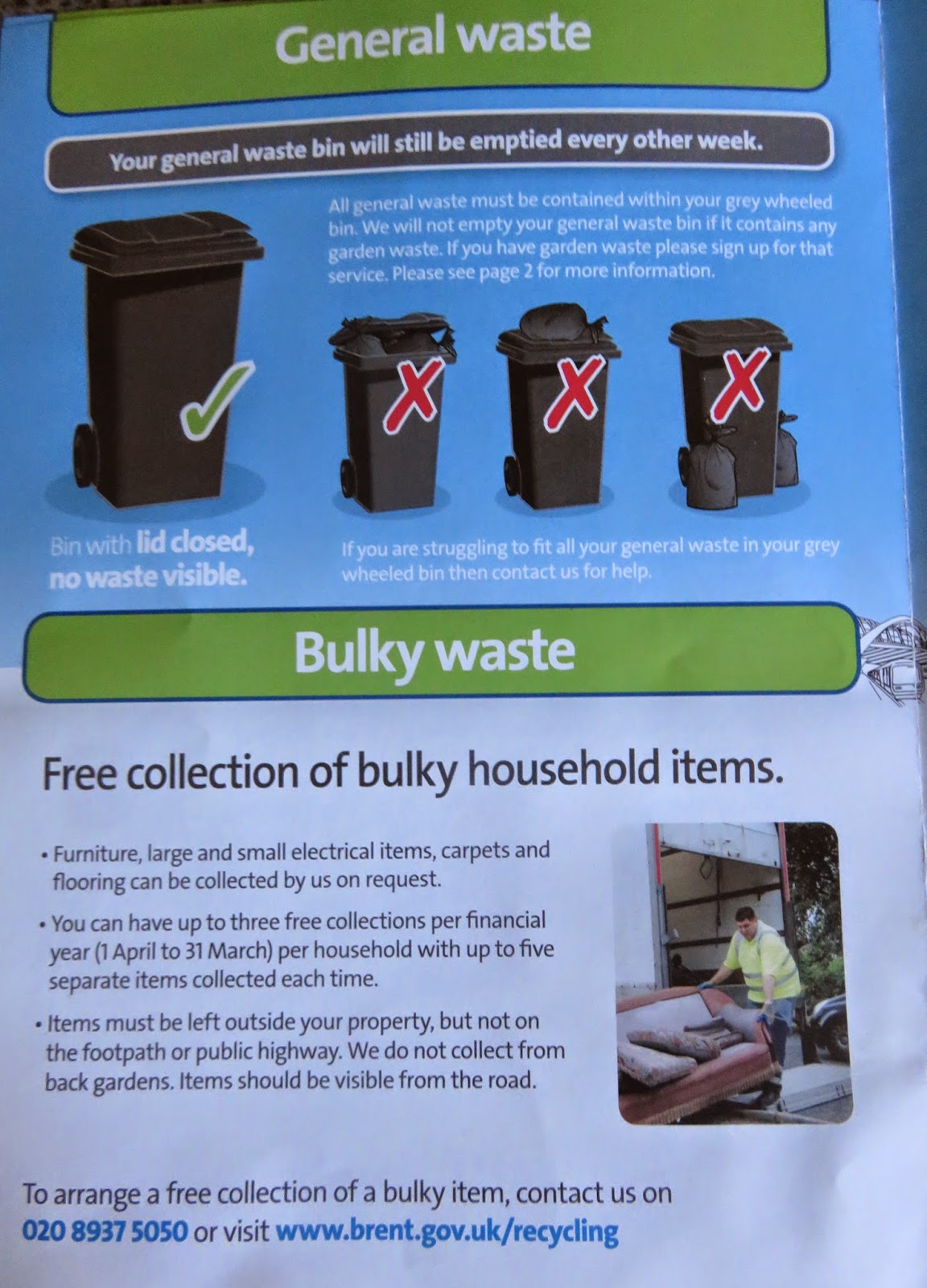 I was incensed yesterday when I saw the leaflet about Brent Council's waste collection that had been pushed through my door.  It put such a gloss on the £40 annual  'garden tax' charge for green bin collection that many people must have thought that it was almost as good as winning the lottery!

It advertised a free bulky waste collection despite the fact that proposals are going before the Council to introduce a charge of £15 for such collections.

The bulky waste collection charge has long been an issue between Labour and the Lib Dems. The Lib Dem-Conservative administration  introduced a charge of £25 and the incoming Labour adminstration in 2010 abolished the charge.

The arguments the then councillor James Powney made against the charge still stand.  LINK

Now Paul Lorber, Liberal Democrat Brent Council leader at the time of the £25 charge, has made a formal complaint to Council officers about the current leaflet. He suggests that the £15 charge was put into the proposals merely so that it could be withdrawn and show that the Council had listened to residents:

I have expressed my concerns as to how the scrapping of the weekly service and the proposed £40 charge for a reduced service has been presented. The latest leaflet delivered to residents continues to provide misleading and incomplete information.

I am disappointed that the misleading information produced by the Council and Veolia has continued. Please treat this email as a formal complaint on the following grounds:

I object to a reduced and chargeable service to be described as 'New' as if it was something positive when in fact residents are being asked to pay £40 for a substantially reduced service with collections just fortnightly during the summer and just monthly during the winter months.

On a separate issue I note that the leaflet is also advertising the 'Free' collection of bulky household items. This confirms the sham of the current budget consultation as the item to charge £15 for this service in the hope of a massive reduction in take up is just a 'sham' as this was put on the list simply to enable the Leader to claim later that this is one service "I have managed to save".

I think that the Council (officers and councillors) are showing a great deal of disrespect to Brent residents in the misleading way you are communicating with them. The leaflets are paid for from taxpayers money and should therefore provide honest information and not to reflect misleading information from the Labour Administration.

Until Mr Lorber is able to express himself clearly, cogently and without errors he would be better off leaving public statements about communication to others. His email is sloppily expressed and careless and spoils a decent argument.

I don't think attacking someone on the grounds of their grammar is all that clever, especially when English is not their birth language.

Agree Mr Lorber could have re-read it before he clicked send or print.

Seems the council are trying to gain a revenue stream.

How many people use their green bins?
How often do they use them?

I know how I use mine!

I don't have room to compost everything, and if you have trees, shrubs and roses, as I do, then you simply can't compost everything. Woody or diseased materials don't rot well in domestic compost heaps - the commercial digesters are hotter and material is finely shredded. Grass cuttings can a be oddly tricky too, as they slime. Perennial weed seeds again often don't get hot enough to kill them off.

On the collection day after Christmas, my bin was full of my chopped up Christmas tree. The week after, it was full of prunings and other stuff. This week, it's full again. I reckon one more full bin will see the garden reasonably tidied. Then, it will be time to prune the roses, which won't fill it, but the big eleagnus which needs a MAJOR hack will probably take up a full bin or three. Monthly collections in winter will be awkward as heck.

And that's the thing: whoever has designed this, doesn't get the fact that gardening happens all year round, not just in summer. One officer tried to justify it on the grounds that grass isn't cut in winter, so a monthly collection is fine.

As to food waste, I've very little, but it always went in the green bin if not usable on the garden. (Egg shells are great for roses, as are banana skins). So, am I supposed to have yet another bin, which I've no room for, just for the odd time there's a chop bone?

My local friendly foxes deal with bones. BTW dos anyone else have a slightly queasy feeling over the fact that Veolia deal with burials as well as recycling? :-}

I tend not to leave bones out, in case the local cats get stupid enough to chew them! Given that one furbrain eats the bread I leave for the birds....

Agree that this is a nonsense email from Lorber. There is a case for the council to answer but Lorber is incapable of making it. "New" means "not old", it doesn't mean, or even imply, that it's anything positive.

No wonder LibDems are down to one councillor. When are we going to get some proper, effective and coherent opposition to Brent Labour?

My Green solution: take burials away from Veolia (stupid name anyway) and give the work to the foxes.
Mike Hine

Uncle Mo's instruction to councillors that they should not read Wembley Matters may have a positive aspect. Imagine their excitement at seeing this wonderful idea to out-source to foxes - it would be on the next Cabinet agenda.

They wouldn't want it for free though, Martin. The only way I could validate it in their eyes would be by setting up a consultancy called Vulpine Solutions, initiating a close personal relationship with a serving Brent senior officer (no thanks) and charging a 6 figure sum to reward my brilliance.
Mike Hine

Cllr Stopp and potted having a restaurant meal with executives from Veolia. Let's hope he was supporting residents and not his own interests.

Cllr Stopp was spotted having a restaurant meal with executives from Veolia. Let's hope he was standing up for residents and not his own interests!

no wonder people don't bother voting. even when you do vote you don't know if they going to actually do anything good for their area

Me too, I have 2 green bins for a block of 4 flats of which only 2 have access to the garden. I have 1 composter which I try to compost everything that benefits compost. The rest goes in my 2 green bins, everything unwanted from tidying up the garden and the whole of our premises mainly leaves on the private road and around our garages. I manage to fill these bins several times a year and because of location call the council when they are full for them to empty. £40 per bin is the suggested fee for emptying these bins regularly and presents a Tax for everyone who has the luxury of a garden. This equates to approx. 80p per week and I personally have no problem with paying a fee of 80p everytime I call for a collection. However I will not be taxed annually for the service, so if this is implemented I assume that those who will not pay will have their green bins removed, which will then result in everyone returning to the bad old days of disposing of their garden waste into the Landfill bin. Considering the council wishes to substantially reduce the amount of refuse sent to landfill this will create a substantial increase instead of the desired opposite.

As to food waste, I have very little too, the majority of which is consumed by the pets, but myself and other residents will not be choosing to use the smaller kitchen caddy which you we are advised to keep in our kitchen for the week disposing of all waste food, rotting, growing mould and in summer attracting flies and all manner of putrid smells especially in summer, all that will be going in plastic bags and into the landfill bin. It would appear to me that the council has not had any joined up thinking by their environmental protection team consultations.

In defence of Paul Lorber, when he was Leader of Brent Council when the Liberal Democrats were in control, he and the Lib Dems championed the volunteer "Streetwatchers initiative" made up of local volunteers in all wards who reported on fly-tipping, rubbish collections, damage to pavements, roads, trees, etc. They held ward meetings every 3 months, an Annual Conference every year, with speakers and the opportunity to discuss what had been achieved and where we should next be concentrating our actions to achieve a better cleaner environment. It was a group that I was proud to be associated with, all volunteers were provided with a dedicated phone number to report incidents. We all had access to our Ward Managers who supported our efforts. Let's not forget that the Lib Dems pioneered and implemented much of our Recycling, Waste Disposal, policys that we currently enjoy, which the current Labour Council seem hell bend on destroying and returning to the bad old days of dirty streets, piles of uncollected rubbish, and a fly-tipping free for all.

No wonder people don't bother standing for election, when you do you can't have a quiet meal with your chums without people spying on you.

it's a hard knock life