As the number of active Covid cases continues to rise in Brent and nationally the National Education Union has written to the Prime Minister and the Secretary of State for Education  calling for schools and colleges to be closed for at least the first 2 weeks  of January, with on-line learning for all pupils except for vulnerbale children and children of key workers who woul;d attend school.

The Joint General Secretaries of the National Education Union have written to the Prime Minister and the Secretary of State for Education asking for Government to share the evidence and advice they are receiving about school opening including over the decision to overrule Greenwich council in the run up to Christmas.
With little time left before schools and colleges are expected to start back for the new term Government has still given no clear indication of what will be happening in the week of the 4th of January.
The NEU Joint General Secretaries have also reiterated their call on the Prime Minister to keep schools and colleges closed for at least the first 2 weeks in January, with online learning except for vulnerable children and the children of key workers.
Full text of letter below.

Dear Prime Minister and Secretary of State for Education,
We last wrote to you on 21st December, calling for on-line learning in schools and colleges for the first fortnight of January 2021, for the Government to use that time to support local directors of Public Health in setting up mass testing programmes for schools and for the beginning of vaccination of education staff.
As we explained in that letter we believe each of these steps would help provide more continuity of education for our young people – and we expressed our willingness to be involved in discussions of how best to implement such programmes. You have not replied to that letter.
Today we are writing to ask you to share with the teaching profession and with education staff the advice you have been given by the Chief Medical Officer and/or the Chief Scientific officer or their deputies on:

The order issued to Greenwich on 14th December had the effect of ensuring that secondary and primary schools that would have otherwise begun a period of online learning during the last week of term continued with physical teaching: it also meant that other London borough councils contemplating similar advice withdrew from those positions.
Yet in the latest Coronavirus test data it is clear that the infection rate amongst school age children continued to increase sharply during that last week of term.
And it is clear that by the end of term school age children had the highest infection rates of any of the age demographics analysed by the ONS. Primary, Secondary and Higher Education age groups all have more than 2,000 cases per hundred thousand; much more than any other demographics.
Secondary aged pupils have by far the highest rate of all age groups and the highest increase in multiples since September – with cases having increased 75 time since then.
Table shows Cases per 100,000 from the ONS Coronavirus Infection Survey, tabulation by the NEU 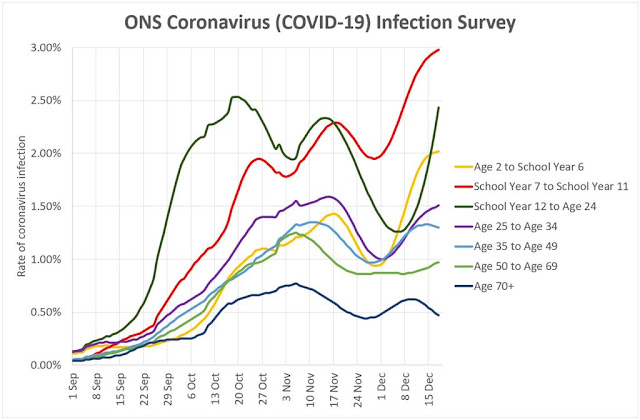 Given the recent, though late, acknowledgements that school age children can transmit the virus, including to their families and staff, we think it is very important that the advice given by the CMO and/or the CSO is public.
This paper from London School of Hygiene and Tropical Medicine and Imperial college argues that Tier 4 will not be enough to control the new variant without school closures: https://cmmid.github.io/topics/covid19/uk-novel-variant.html
It is very important that you also release your own modelling of what might happen to cases amongst pupils, parents and staff given the best current understanding of the new variant of the virus.
For all of these reasons we call on you to release the advice and modelling we ask for in this letter. It is not too much to ask for this nor to ask that you implement the steps we called for in our previous letters to you.
You are asking teachers and support staff to teach in often poorly ventilated classrooms, with no PPE in those classrooms and with the ability to socially distance very limited. As it is your Government that is making these plans it is clearly your responsibility to ensure safe working for staff and for you to understand, mitigate and communicate the risks.
We have previously asked the Secretary of State to share with us the numbers of education staff that tested positive in each week since September, the number who have been hospitalised and the number who have died. So far that information has not been shared with us.
You certainly cannot expect education staff to show good will towards your plans for education if you do not at least share all the information you have about this dreadful disease with them.
Yours sincerely,
Mary Bousted Kevin Courtney
Joint General Secretary Joint General Secretary 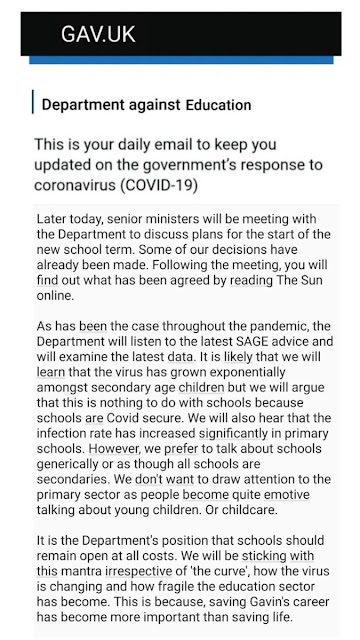