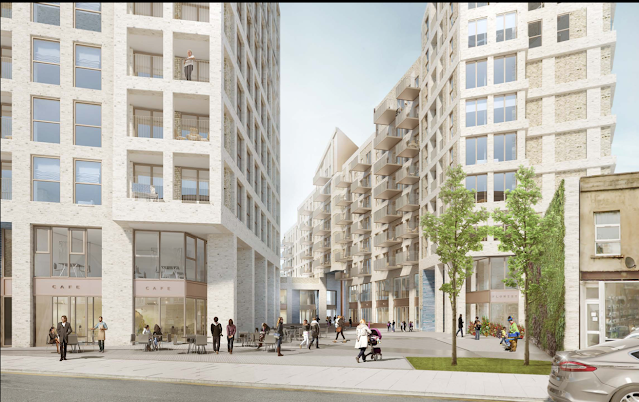 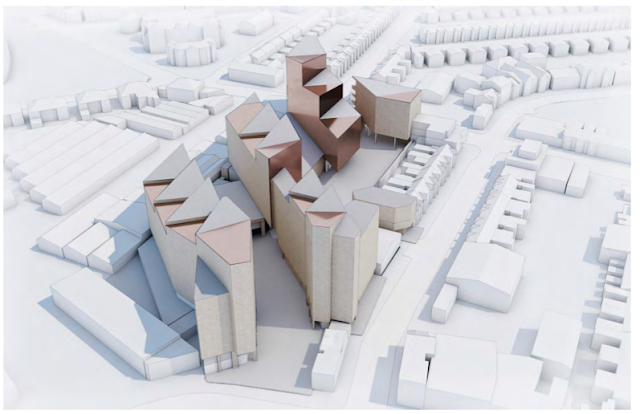 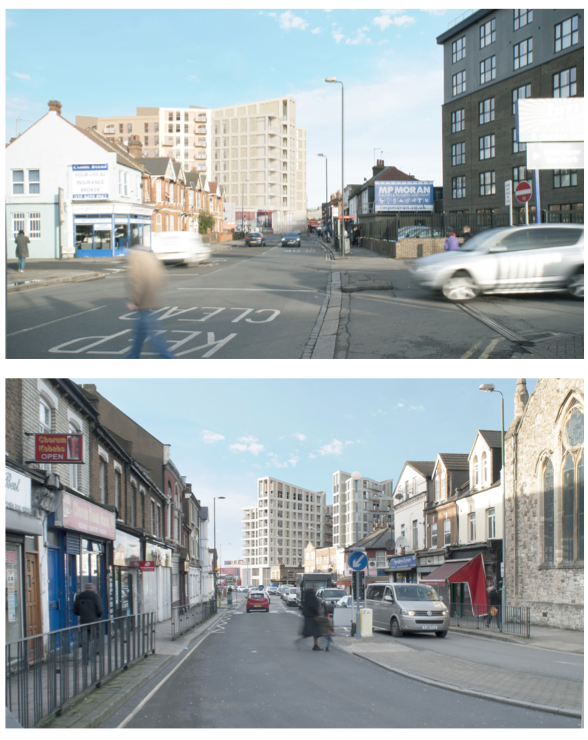 In a move that is quite unusual in Brent, planning officers are recommending that the Planning Committee refuse the application for a major development on an industrial site that lies between Dudden Hill Lane and Willesden High Road.

Adjacent sites are also earmarked for development and other nearby developments are a major housing project at the College of North West London  and flats on the Learie Constantine Community Centre site. This application would form part of a Masterplan for the area.

Taken together the developments will change the face of this part of Willesden and continue the proliferation of high rise developments in Brent. Although the maximum height of these blocks is less than half of those around Wembley Stadium they would still make a major impact on the local streetscape as can be seen from the images above. The two storey terraced houses on Colin Road would be dwarfed by this development and experience a significant loss of light. 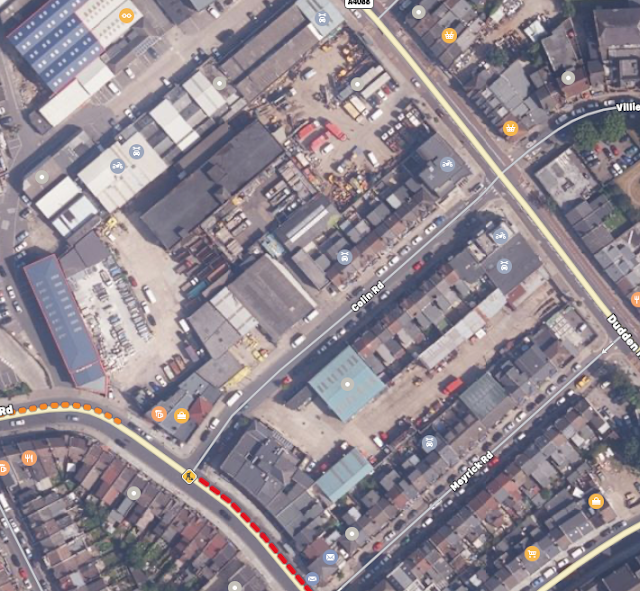 Given the current controversies over the short-comings of shared ownership it is noteworthy that the officers' report states that  95% of those in affordable housing need cannot afford intermediate products such as shared ownership. There has been considerable dialogue between the developer and the council over the housing provision and compliance with policy:

The Brent Strategic Housing Market Assessment 2018 identified a need for 42,000 additional homes between 2016-2041. Using a limit of 33% of gross household incomes to be spent on rent/mortgages, affordable housing comprises 52% of that need. Of the affordable need identified 85% was for social rent (council house type rents) and 10% was for London Living Rent-LAR (pegged at a percentage of median incomes). Just 5% was for people able afford to between that and 80% of median local rents (typically these people might seek to buy shared ownership units). Whilst the headline figure provided by the applicant, being 66% affordable housing, is well in excess of the 50% overall target set out in DMP 15 and emerging policy BH5 , this figure is weighted heavily in favour of intermediate product (shared ownership units) and therefore the proposal is not in accordance with this policy. As stated above, the SHMA identifies that intermediate products are essentially unaffordable to 95% of those in affordable housing need and are more likely to be occupied by people who have a choice within the market for alternative accommodation e.g. market rent.

The final offer presented by the applicant shows that even with 100% affordable workspace and on a policy compliant tenure split the development could reasonably deliver 13 additional London Affordable Rented homes which would help the most specific needs of the borough. Whilst this would be at the expense of a large proportion of intermediate units, there is far less need for this type of housing.

Given that primary need in the borough is for LAR homes (as reflected in adopted and emerging policy) the overprovision of Intermediate Housing and other benefits of the scheme are not considered to be of sufficient benefit to outweigh the harm associated with the under-provision of affordable rented homes to meet local need.

Comments on the planning consultation portal were fairly evenly split between those in favour and against.  The provision of a supermarket (named as Lidl in the drawings) was seen as positive as was a nursery, but the impact on traffic and parking in the are was a negative factor, as well as the loss of daylight to the local two storey terraced houses in Colin Road.

Whilst the proposed development would undoubtedly bring forward significant benefits, largely in the form of modern affordable workspace and the provision of a large number of homes to meet borough housing targets, including a high overall number of Affordable homes, the development would also fall short in a number of policy areas. In particular, the proposal fails to deliver the maximum reasonable amount of Affordable housing on a policy compliant tenure split. Whilst the headline affordable housing figure is high, this is not considered sufficient to justify the number of London Affordable Rented homes, which are proposed at less than the maximum reasonable number. There is a significant need within the borough for the lower cost Affordable Homes (Social or London Affordable Rent) which look to cater for those most in need in accordance with adopted and emerging policy.

Furthermore, at the scale proposed the development would result in significant daylight impacts to a number of neighbouring properties. The benefits of the scheme are not considered to outweigh the harm identified to these properties.

Finally, the development would provide parking for the supermarket well in excess of standards without an appropriate parking price regime to encourage non-car access and would therefore encourage additional unnecessary car journeys to and from the site and from the area in general. Again whilst policy deviations can be accepted when having regard to a wider planning balance, in the case, the benefits of the scheme are not considered significant enough to outweigh the harm associated with the failure to provide adequate means to encourage non-car access to the supermarket.

To conclude, the development is contrary to policy, and would fail to deliver the degree of benefit necessary to outweigh the harm associated with the proposal.

The statement on shared ownership will be significant for future planning applications in the borough.

But why has it taken Brent's Planning Department so long to understand that "affordable housing" needs to be affordable to the borough's residents?

At last a Brent Planning Officer has had the common sense to dispel the myth that Shared Ownership is Affordable. They are correct it is not. I have first hand knowledge that part mortgage/part rent plus ever increasing Service Charges now equate to more than Market Rent for an identical property. The propensity for Housing Associations in conjunction with Developers in continuing to push for inclusion of these properties in all new developments is surely questionable. Anyone would think they are becoming Estate Agents!i would hope that with the Governments new proposals for change to Leasehold and property ownership that along with all the nightmare stories highlighted in the press, Shared Ownership is now as dead as a dodo, and HA's go back to doing what they did best, renting truly affordable properties at social rents.