Martin Redston: Why one law for SNP's Margaret Ferrier and another for Tories' Dominic Cummings over Covid breaches?

Local resident Martin Redston, despite setbacks in the courts, is continuing his battle to hold Dominic Cummings to account over his breach of Covid restrictions last year. It was a breach  that many see as the catalyst for the public's loss of confidence in government advice and the subsequent increase in contagion.

In the latest message to supporters Redstone says:

Well what a surprise, Margaret Ferrier,  MP for the SNP is going to be prosecuted  LINK  whilst Dominic Cummings, Private Citizen protected by Prime Minister Johnson is going to get away with his lockdown breach escape to Durham scot free!

When we wrote to the Metropolitan Police back in August they responded with the letter enclosed below.  In particular in para's 2 and 3 they state:

....I can confirm that an assessment has been made of all the information available and there will be no Metropolitan Police investigation at this time.

Where the Metropolitan Police Service (‘MPS’) receives allegations of breaches of the Health Protection (Coronavirus, Restrictions)(England) Regulations 2020, the MPS focuses on those that are live or ongoing where police action can enable a change to behaviour that is posing a current public health risk.

So what exactly is the difference in dealing with the way that Police forces deal with these two high profile public figures?

We can't give up now. 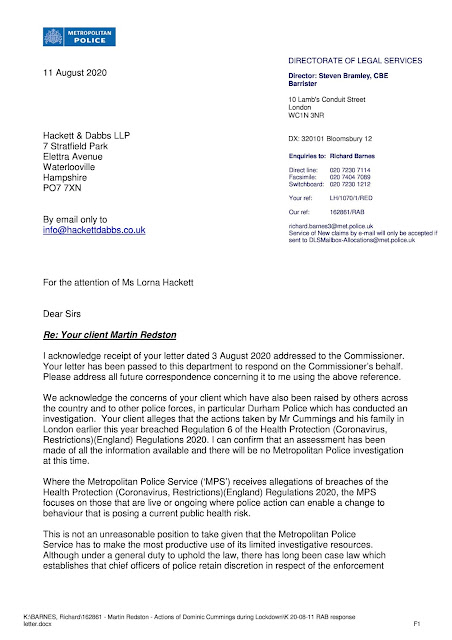 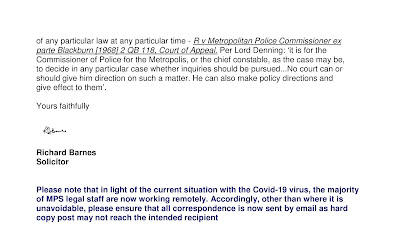 A few days ago Martin Redston, who has raised £46,000 for his court action LINK.  sent an update to supporters of his action outlining the present situation:

We have received notification from the Appeal Court that they have not granted me permission to proceed. I enclose the ruling for reference. Having discussed this with our legal team, who have researched the subject, we can only concede that there seems to be no further formal proceeding we can take to persuade the DPP to take action along with the Metropolitan Police.

In the ruling, the Judge, Lord Justice Dingemans decided this was not a case to allow the appeal because there has now been referral to the Metropolitan police to request an investigation that may provide an alternate remedy for the rule of law. We must hope the Met conducts a thorough investigation now on the movements in London when Cummings commenced his journey and, indeed before that time when he visited his office whilst likely to be infected; and does not suffer the same failings of the report by Durham Police which found an offence in Durham but failed to refer that offence to the DPP. If following the Met investigation no action is taken then a possible challenge to that will fall to be considered. However I am pleased that the court accepted jurisdiction which is important for other cases and a small but significant gain and the rule of law point was recognised

I am now consulting with my legal team about possible ways forward, the challenge for an ordinary citizen to take action against a miscreant bearing in mind that the Covid emergency legislation seems to preclude this pathway.

Much of Public opinion and the Press is still accusing Cummings of breaking the trust of the public and undermining good governance. Even now after all these months it is reported that  200 British skiers in Verbiers scarpered in the night to avoid quarantine as ordered by Swiss authorities. But it remains that no action has been taken by the authorities over Cummings' main breach at the start in London which has set the tone ......not just his action and public mea culpa, but the turning of a blind eye by the key police authority and public prosecutor.

I am now consulting with my legal team about possible ways forward, the challenge for an ordinary citizen to take action against a miscreant bearing in mind that the Covid emergency legislation seems to preclude this pathway.

We are not giving up just yet. Any ideas that you may have will be gratefully received, especially if you feel that you have been affected by Cummings' actions back in March..