Harlesden’s Public Art – an update (and request for further help!)

Last month, I wrote about the public artworks installed in Harlesden as part of the City Challenge project in the 1990s. There was one I definitely knew about, the Sundisc in the community garden outside the beautiful and historic Victorian villa at 1 Morland Gardens (which Brent Council plans to demolish!). 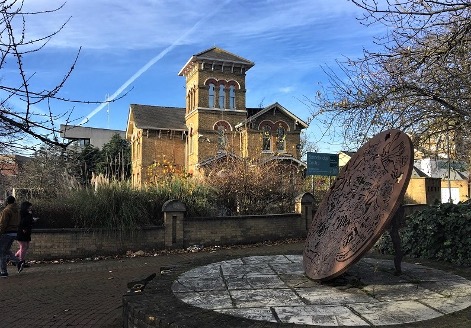 The Sundisc sculpture, in the City Challenge community garden outside 1 Morland Gardens.
(Photo by Irina Porter)

I asked for your help, with any information and photos that you could provide about other public art dating from this time (1993 to 1998) in the Harlesden and Stonebridge areas. Our intention is to put together an illustrated record of all those artworks, which could be made available online for anyone to view, read and enjoy. We have received some responses, which I will share with you here, but I still need your help, please, to fill in some gaps!

I have been sent copies of some photos of two Harlesden artworks that I wasn’t aware of before. These were taken more than a decade ago by Robert Russell, and had been posted on the Willesden Local History Society Facebook pages. Many thanks for these! Because of “lockdown” and staying at home, I have not been out to see these myself yet, but I look forward to when I can.

The first two pairs of photographs show a variety of views of two remarkable mosaic columns, situated by the corner of Mordaunt Road and Winchelsea Road, not far from Harlesden Station in Acton Lane. The collage of mosaic pictures really captures the vibrancy of Harlesden life. Can anyone tell me please (via the “comments” box below), what this artwork is called and who was the artist who created it? 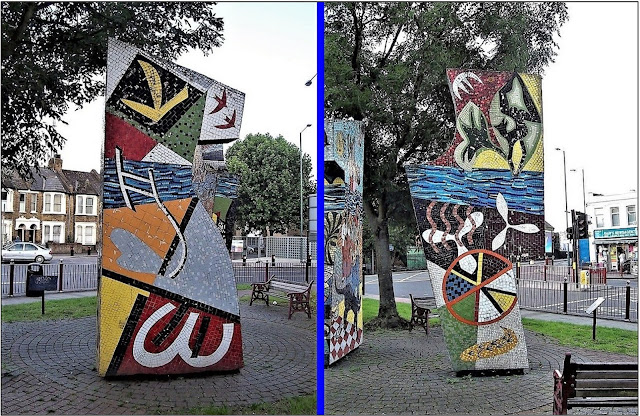 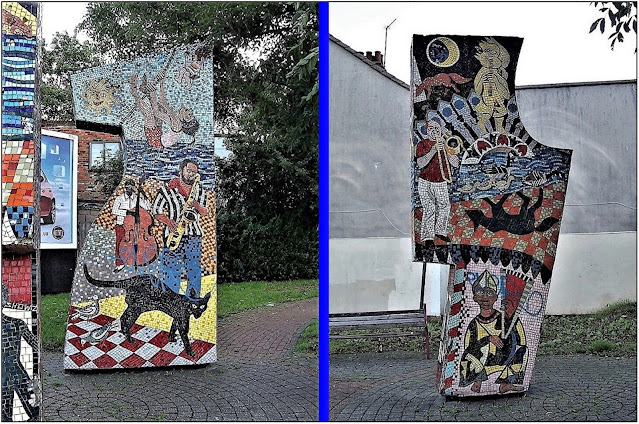 The second artwork appears to be a mosaic mural, along a wall beside Church Path, just behind the Brent Samaritans building in Leopold Road. It depicts a street scene showing a range of adults and children from Harlesden’s diverse community, going about a variety of everyday activities. Again, I have not seen this vibrant piece of public art before – have you? I hope it is still there, brightening the lives of anyone who walks past it.

I would be grateful if anyone reading this, and seeing the photograph below, can tell me and other readers more about this mural, including what it is called and who designed and made it. Thank you! 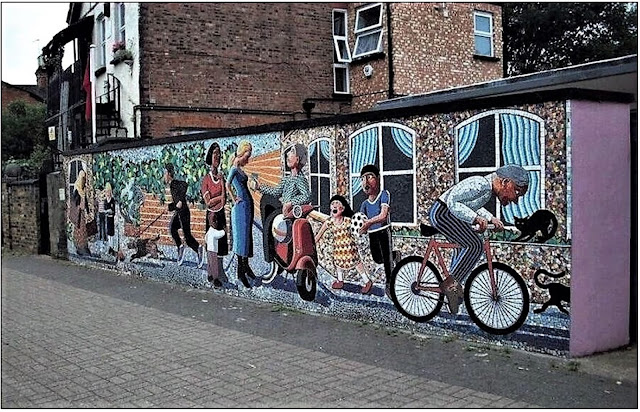 After my first article, someone suggested that I try to contact Gerry Davis, who was the Chief Executive of Harlesden City Challenge, to see whether he could help with any information about the artworks. Luckily, a friend was able to let me have his address. I sent Gerry a paper copy of last month’s article, and he kindly supplied the following reply:

‘The provision of Art was done under the City Challenge "Art in the City" project at a cost of just over £150k in the early 1990's.

I regret that I no longer have details of all the Art Works funded by HCC, but I am happy to let you know what I remember.

There should be a plaque at each HCC art site, like the one next to the Sundisc. Other Art Works were:

·   Sculptures in front and alongside the building which was called "The Design Works " on the corner of Rucklidge Avenue and Park Parade.

·   There were Giraffes at the corner of Scrubs Lane and Harrow Road, but I think that they were removed during the new development

·   The murals on the bridge (at Acton Lane, see photo in previous blog) may be HCC art works, but I do not remember.

There must be more but I regret that I do not remember them. However, the area was devoid of artworks when HCC started, so any works which are there now are most likely from HCC.’

I have managed to “find” one large sculpture outside “The Design Works” building in Rucklidge Avenue by looking on Google street view. Again, it’s an interesting piece, and my guess at its name would be “Men at Work”. Here is an image of it, and any information on it that you can provide would be appreciated, thank you. 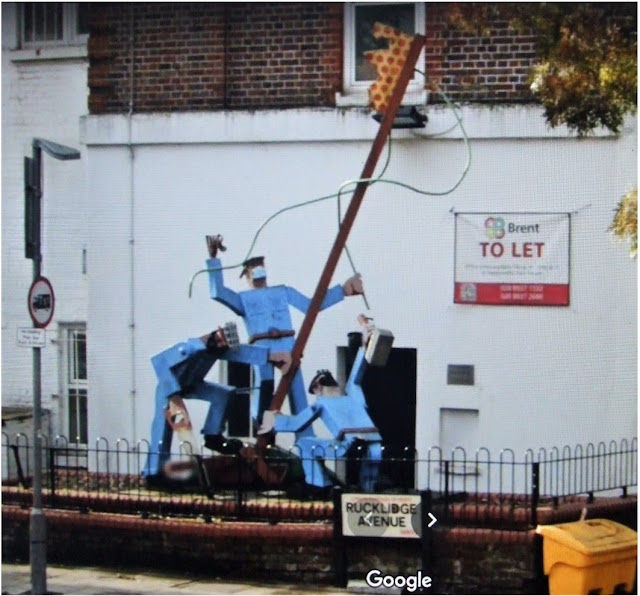 The sculpture outside “The Design Works”, at the corner of Rucklidge Avenue.
(From Google street view)

“The Head” in the car park outside Tesco in the centre of Harlesden was apparently stolen! I understand that this was during a time when thieves removed a number of metal sculptures around the country, to melt down for their scrap value. Can anyone tell me more about this artwork, or send a digital photograph of it (c/o Martin Francis at: martinrfrancis@virginmedia.com ), please? The same request goes for the pavement art on the roundabout at Craven Park / Craven Park Road.

Gerry suggested that one of the artworks, at the corner of Scrubs Lane and Harrow Road, may have been lost during redevelopment. I have now read that the giraffe heads were a sculpture by Rebecca Nassauer, and that they were removed (or stolen?) during the construction of a new church building around 2009. Surely a piece of public art showing giraffe heads, and 5.5 metres tall, must have caught the attention of passers-by? Has anyone got a photograph of these missing giraffes, please (even a pre-digital one, which could be scanned)?

All of the artworks I’ve mentioned are part of Harlesden’s Public Art heritage, and it deserves to be preserved and recorded so that future generations can enjoy it too. Let’s take this opportunity to celebrate the efforts made in the 1990s to brighten up Harlesden with public art that enriches the lives of residents and visitors. Thanks in advance for the photos and details that we look forward to YOU sharing with us!

And can someone please tell me how these were agreed and financed AND who in the council has the responsibility for their maintenance costs...

Hiya I had some involvement in the installation of the works of art, but only approving them from a highway perspective. I recall there were also either two or three small statues on High Street Harlesden on the wide section of footway near the library. They were about 3ft high and I recall one of them (nearest to the library) was a castle chess piece reading a book. I remember going on a site meeting with the artist to discuss the installation. I think one of the others in this location had a pair of hairdressing scissors on it. Hope this helps, it may jog someone else’s memory.

I don't know how the artworks were agreed, or who in Brent Council now has responsibility for their maintenance, but I will try to find out and put the answers in a later comment when I get them.

I can answer how the artworks were financed, by sharing this paragraph from a blog of October 2020, about Harlesden City Challenge and its role in acquiring the Victorian villa at 1 Morland Gardens to provide a new adult education college for Brent:-

"The then Government’s City Challenge programme ran from 1992 to 1998, ‘with the aim of transforming specific rundown inner city areas and improving significantly the quality of life of local residents.’ Harlesden in Brent was one of the areas whose bid for major funding, through a specially formed company Harlesden City Challenge Ltd (“HCC”), was successful. The basis of the finance for City Challenge was that capital projects under the scheme would have 75% funding from the Government, with the other 25% being raised from Local Authorities, local businesses or other sources such as charities."

City Challenge was of course a Conservative Government's initiative. Thanks Janet. I remember the castle and I remember there were others in the High Street. There was some concern about sight impaired people bumping into them. There was also discussion about the substantial railings erected around John Keble Primary, financed by City Challenge money, when some of the school buildings were far from substantial.

As well as the information about the street art near the Library (thank you, Janet) I have now received some information on two of the artworks pictured above.

The sculpture outside "The Design Works" was commissioned in 1995 by Harlesden City Challenge from the artist, Kevin Harrison, and is called "The Workers".

The mural in Church Path, near Leopold Road, is a slightly later work, not HCC, described as the "Brent Samaritans Mosaic". It was created in 2002/03 by the artist Jim Anderson.

Please keep the information coming, as it is all very helpful for our project! THANK YOU.

Further to Pam's query above over how these artworks were agreed, Gerry Davis has kindly supplied the best answer he can give on this.

"Art in the City" was the project owner for the public art in Harlesden, but Gerry can't remember the names of the people who actually ran Art in the City, and agreed the particular artworks that were installed.

The Church path mosaic is very much still there (and in great condition) - you can find other examples of Jims work at http://www.kenya-mosaic.com/ . The plaque next to it reads: This mosaic was made by Jim Anderson 2002-2004 www.kenya-mosaic.com. Thank you to Brent Artists' register; to Brent Samaritans, and to Holly, Rasheana, Kate, Ofome, Stephanie, Marie-Ellen, Tiffany, Kelly-Anne, Charisse, Tara, Jennae, Candisha, Rhiannon, Shane, Kyisha and all others who helped...