Another Alperton development approved despite huge misgivings over height, amount of truly affordable housing and impact on neighbouring residents 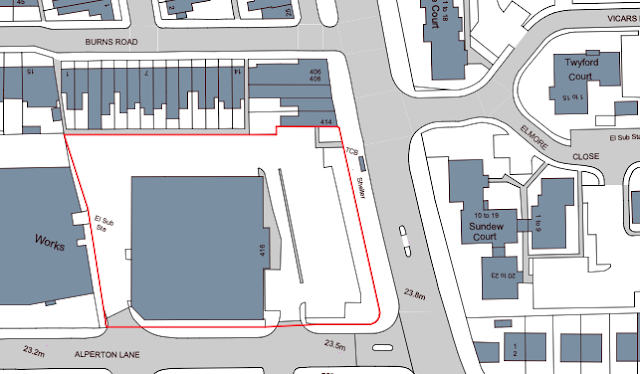 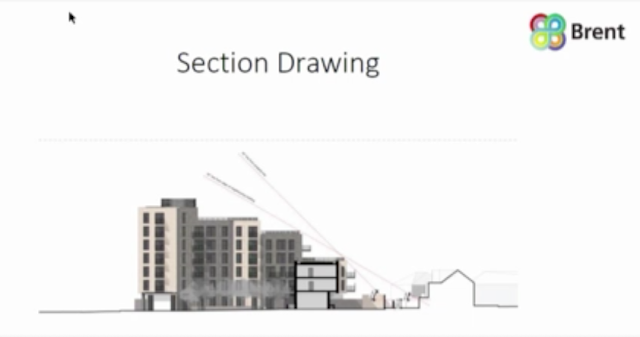 New development heights cross-section with Burns Road
Some familiar themes emerged at this week's Planning Committee discussion about the planning application for the Currys-PC World site in Alperton Lane off Ealing Road.  The site is away from the main high rises at the Grand Union Canal development and, as can be seen from the section drawing above, will dwarf the two storey terraced houses of Burns Road and Cromwell Road.
Apart from the out of local character nature of the development and the impact on the 'right to light' of residents, parking (or lack of it),  the amount of truly affordable housing, the height of the building exceeding local guidance, the affordability of the rent in the promised community space  and the pressure on local infrastructure were all major concerns.
On the parking issue a resident described how even without the development, parking spaces were so rare that she filled up her hot water bottle and sat in her car for hours until she could move into a vacated space.  On the 'right to light' she said she had served an obstruction notice  on Brent Council.
A Cromwell Road resident told the Committee that pandemic restrictions had made it hard to organise opposition through public meetings and collecting signatures on petitions.  She had never imagined that the area would change so much and in such a dramatic and negative way. They had been told that there would be no tall buildings in the area according to the 2011 Alperton Masterplan. Now Edwardian terraces will be sandwiched between tall buildings.
Residents pointed out that commercial premises incorporated into other developments with the promises of new shops etc, remained unlet and the rent of community spaces too high for local community organisations.
Max Plotnek, the developer's agent promised low or even zero rents for the community space. He said that there had been 4 pre-planning meetings with council planning officers and the developer had responded to concerns with the highest point of the building away from residential streets. Two extra storeys had to be added to the building, over and above the 5 storeys in the local plan, because without it the development would be economically unviable. This has been confirmed by the independent consultants for the developer and the council and in fact the offer was above the maximum reasonable amount.  He said that the tricky aspect was that the profit generated by the development had to match the exisiting value of the site.  This was 'pretty high' because existing use was a large retail unit and it took quite a lot of development to overcome the deficit. 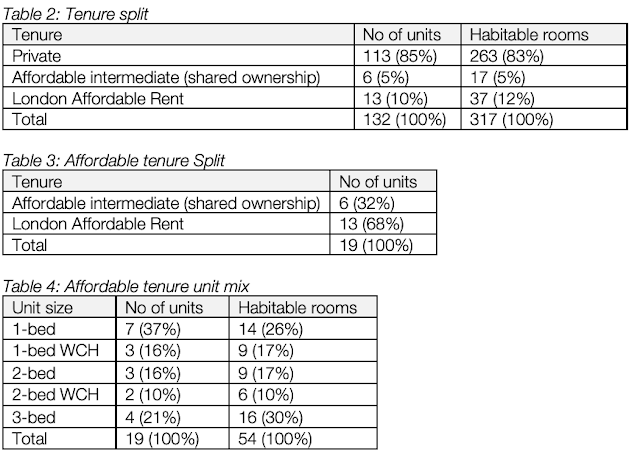 I am (yet again) dismayed, but not surprised, that another major planning application which clearly breaches important Brent planning policies has been recommended for approval by Brent's Planning Officers, and approved by a majority of our elected councillors on Planning Committee.

At least Cllrs Johnson, Kennelly and Maurice did the honourable thing, and voted against it, but they should never have had to go against the Officers' recommendation to do that. That should have been the advice from the Officers themselves.

The Alperton Masterplan of 2011 has been mentioned above, but that was actually ditched by Brent's Cabinet (in November 2019, if I remember correctly).

Brent had already allowed the Masterplan's tall buildings policy, with an upper limit of 17 storeys, and then only for a small number of "landmark" buildings, to be swept aside, starting with the controversial Minavel House case in 2017 (with its tallest tower at 26 storeys).

Information obtained later in 2017, in connection with hospitality received, as recorded in the Council Leader's "Register of Interests", cast a possible shadow over that planning approval, as recorded in a blog at the time:
https://wembleymatters.blogspot.com/2017/10/cllr-butt-and-hospitality-from-property.html

It is time that Brent councillors, including Labour councillors, raised serious concerns about the planning process in Brent with those in the Council's most senior roles!

It is all about money for Developers (and Brent Council) and the comment from the developer proves it "Two extra storeys had to be added to the building, over and above the 5 storeys in the local plan, because without it the development would be economically unviable." What is the point of the Local Plan and height restrictions if Brent Planners simply cave in to the needs of the developers - without any consideration on the impact on local people whose homes back on the site and who have to put up with the problems the development will cause for them. Philip Grant is correct in highlighting serious concerns about the Planning Process in Brent. It simply no longer works for the people of Brent. As a Brent resident of over 50 years I have lost all confidence in the Brent Planning Committee or the Brent Planners.