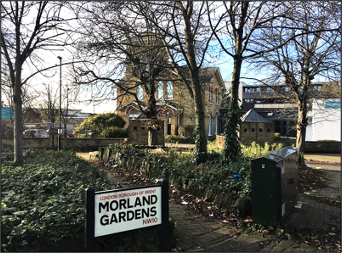 “Altamira”, through the trees of the Community Garden, December 2020. (Photo by Irina Porter)

It’s a couple of months since I wrote my previous guest blog about “Altamira”, the locally listed Victorian villa in Stonebridge which Brent Council wants to demolish. This beautiful heritage asset was restored in 1994, and is home to the Brent Start adult education college.

In August, I asked ‘when (if ever) will Brent’s redevelopment happen?’ This followed a previous guest blog in June, when I revealed how the Council’s failure to take action, over a risk they had been warned about in December 2018, meant that their 1 Morland Gardens project would be delayed.

As mentioned in comments under those blogs, I sent copies of those articles to the Stonebridge Ward councillors, pointing out the knock-on effect the delays were having on another (and better) Brent Council housing project at Twybridge Way, further down Hillside. They forwarded my emails and articles to Council Officers for a response. This was finally received in mid-October, and I would like to thank Councillors Ernest Ezeajughi and Promise Knight for their efforts to get that response.

I believe that, as well as letting councillors and Council Officers know what we think about matters that are important to us, we should also consider their views. Here is the full text of the Council’s response:-

Thank you for your email of 30 September 2021 regarding the proposed development at 1 Morland Gardens, NW10. I am responding to yourself in the first instance so that you may share this with the resident and I have copied in the other Ward Councillors to this response.

Whilst the delays to the development at 1 Morland Gardens means that the Annexe will be used for longer than first proposed and beyond that of its current planning permission, this will not change the Council’s intentions for the Annexe site. Furthermore, not using the site for Brent Start would mean a significant reduction to the service which provides a vital service to Brent residents. Therefore, once the Morland Gardens moves forward under its current proposed trajectory, the Council will recommence project delivery on the Annexe site to deliver the required homes and NAIL accommodation as soon as it is practical to do so.

The Council continues to deliver its new Council Homes Programme across a number of sites in the borough. The Council shares the frustration that the original tender process did not yield the desired outcome which has caused some of time difference between the programme submitted to Cabinet in January 2020 and the current programme as per the report in August 2021. Nevertheless, officers are working to deliver the scheme and its benefits for the local community, this includes working on the planning strategy.

The ‘former Stonebridge School Annexe site’ is properly known in Brent Council’s new homes programme as Twybridge Way. It is meant to provide 14 family-sized houses (with gardens), 13 smaller flats for people on the Council's waiting list, and 40 1-bedroom flats for supported living. This is what it would look like:- 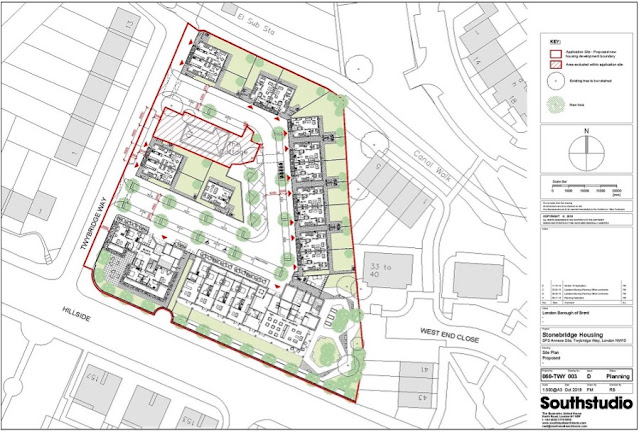 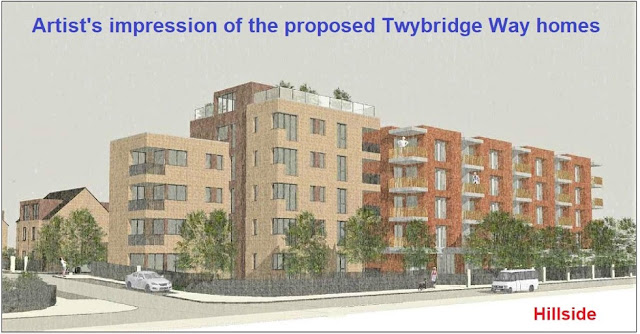 Though I am ready to consider the Council’s position, I have to consider it critically (that’s what scrutiny is meant to be about!). Having done so, this is the reply I have sent to the Stonebridge Ward councillors, with copy to the Lead Members and Council Officers involved:-

Thank you for your email of 15 October, and for obtaining and forwarding a response from Brent’s Property and Assets section about the Council’s proposed development at 1 Morland Gardens.

The letter you received on 12 October, in response to the points I raised with you on 14 August, concentrates on the need to use “the Annexe” as a temporary home for Brent Start while the site at 1 Morland Gardens is being redeveloped. It sidesteps the two main issues:

1.    The catalogue of mistakes over the 1 Morland Gardens scheme, which has resulted in ever-increasing delays to that ill-conceived project.

2.   The effect this is having on the Council’s plans for the Twybridge Way site (originally the Stonebridge Health Centre, now known as the former Stonebridge School Annexe, or “the Annexe”).

I will deal with the second point first.

The plans for affordable housing at the Twybridge Way site are Phase 2 of Brent Council’s Stonebridge Redevelopment project. This was meant to be completed by 2021, and if work had got underway promptly after the revised scheme for this site had received full planning permission in May 2020 (three months before the flawed 1 Morland Gardens application), completion would only be a few months later than that.

As it is, the Twybridge Way scheme, including its 40 “NAIL” independent living flats, cannot even begin before the summer of 2024 at the earliest, IF the Annexe has to be tied up for use as a decant site for Brent Start.

The 1 Morland Gardens project got off to a good start, in the summer of 2018, when CLTH architects submitted a winning tender for the design work. Their outline scheme would have retained the locally listed Victorian villa, and provided a new college and some housing on the site, without the need for Brent Start to be decanted.

Things started to go wrong towards the end of 2018, when the architects were pressed to maximise the number of new homes that 1 Morland Gardens (together with the community garden in front of it) could deliver.

The delays have got worse ever since then.

·      The architect’s January 2019 Stage 1 report said that 89 homes could be delivered, as well as the new adult education college on the ground floor and some affordable workspace. At that stage, construction was anticipated to begin around September 2019, but it would need Brent Start to vacate the site.

·      That was the prospect which was given to a group of Cabinet members (the Leader, Deputy Leader and Lead Members for Housing and Education) in February 2019.

·      However, when the project was put to a full Cabinet meeting in January 2020 for approval, the number of new homes had reduced to 65, and they were told that work was likely to begin on site in September 2020, and should be completed by July 2022.

·      By August 2021, when proposals to re-tender for the project were approved, even if everything with this process runs smoothly (and that is far from certain), the best that the Council can hope for is that work on site will begin in July 2022, and take two years to complete.

Because the Twybridge Way scheme has been shackled to the 1 Morland Gardens project, its delivery is being delayed by at least 3-4 years. I put it to you, and to Council Officers, that the sooner Twybridge Way is freed from that link, the better for new Council housing delivery in Stonebridge.

Yes, Brent Start does need more modern facilities, and Brent Council has agreed to ring-fence £15.2m of the Strategic CIL funds which it already holds to pay for those. They don’t need to be delivered through the current plans for 1 Morland Gardens. They could be provided at another site locally (such as the Bridge Park / Unisys redevelopment), or as part of a revised scheme for 1 Morland Gardens, which would not require a decant to the Annexe.

I believe the reason that the present ridiculous situation is being allowed to continue is that Council Officers are afraid to admit their mistakes over 1 Morland Gardens. The project has become a Juggernaut, which they insist must be driven forward, even though it means sacrificing the timely delivery of the Twybridge Way homes, and the beautiful heritage villa, under its wheels.

I hope you can understand why I feel the need to use such strong language. Please do your best to persuade your fellow councillors, Cabinet members and Council Officers to seek a better way over 1 Morland Gardens. Thank you. Best wishes,

P.S. I will be putting the texts of the Council's response letter (copy attached for ease of reference) and my email above into the public domain. This is too important a matter to be "swept under the carpet".

If you have any (printable!) thoughts on this situation, or any suggestions on ‘a better way over 1 Morland Gardens’, please add a comment below.

I've just received a reply from Brent Council to a Freedom of Information Act request.

I was asking what action they have taken so far over the legal steps needed to stop-up the highway / footpath outside of 1 Morland Gardens, and to appropriate the community garden land there for planning purposes.

The answer was: 'The land has not been appropriated at this time and will need to go through a formal stopping up procedure.'

This lack of action could well mean even further delay to the Council's proposed development at 1 Morland Gardens (even if they are able to find a contractor willing to build it, for the price they are willing to pay, through the current re-tendering process).

That, in turn, will mean a further delay to the much better Twybridge Way Council homes scheme, unless Brent Council does the sensible thing, and drops its plans to use the "Stonebridge Primary School Annexe" as a decant home for Brent Start.

Will Brent Council do the sensible thing, and rethink its planned redevelopment of 1 Morland Gardens? What do you think?