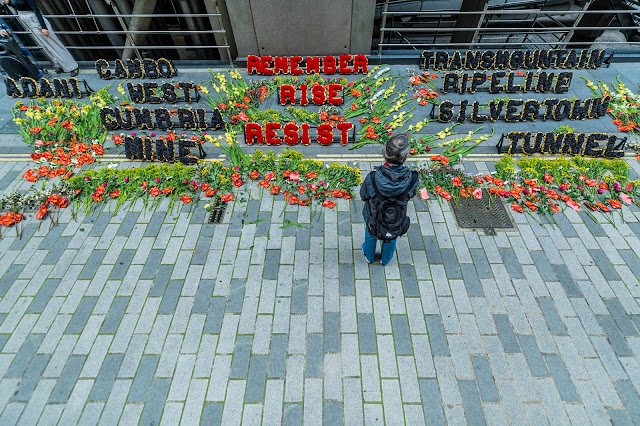 The memorial outside Lloyds of London

Today, protesters from Coal Action Network set up a climate justice memorial at Lloyd’s of London HQ (1 Lyme Street). The climate memorial was set up to remember communities on the front lines of climate breakdown who are directly impacted by harmful projects and climate impacts.

The memorial involved hundreds of flowers and floral wreaths (following the visual theme of REMEMBER - RISE - RESIST), being laid outside the HQ. Testaments from communities on the front lines of fossil fuel projects and climate impacts were read out and delivered to staff in the building.

Through the memorial we will bring to life the memories of every person harmed by the injustices of the climate crisis. We’ve laid wreaths naming climate wrecking projects we want Lloyd’s to rule out underwriting today, and help to prevent billions of lives being destroyed by climate impacts.


Flowers with over 600 individual messages from people across the UK were handed out to staff going in and out of the Lloyd’s building. Staff were asked to speak to senior management in Lloyd’s about ruling out insuring all fossil fuels, as well as, various fossil fuel projects including the Adani Coal mine, tar sands TransMountain pipeline, West Cumbria coal mine, and the Cambo oilfields. The group also called for Lloyd’s to pay compensation for climate impacts.

The climate crisis is harming the poorest and least responsible of us first and worst. The blame falls squarely at the feet of executives at corporations like Lloyd’s of London. Day after day they decide to profit from death and chaos, by underwriting projects that will lead to climate breakdown, while refusing to insure everyday people against the floods and wildfires they are helping to create.

This action is the latest to target Lloyd’s of London. Previous actions have included fake coal being dumped outside the building, green paint being thrown on various insurance offices and thousands of people contacting staff to ask them to stop underwriting fossil fuels.

This memorial is the first of many being planned. On the 29th October, as part of a Defund Climate Chaos day of action, groups across the world will take similar actions on the doorsteps of a range of financial and insurance institutions. Coal Action Network confirmed that they will be returning to Lloyd’s HQ on that date.
Posted by Martin Francis at 16:24:00