Recording of the Granville New Homes item at Cabinet this morning.

Cllr Margaret McLennan, Deputy Leader of Brent Coucil and lead on Finance, told colleagues at today's Brent Council Cabinet that the poor build of the Granville New Homes back in 2009 would not happen today because the council has improved robust procurement procedures in place and the present council   would not tolerate such poor workmanship.

McLennan did not directly address the fact that the project was built by Higgins who are currently building for the council in Stonebridge, but at the same time said that the recommendations from Scrutiny were 'pertinent and valid' and would ensure that such an issue would not occur again. LINK

However Scrutiny's recommendations were not put to a formal Cabinet vote so their status is unclear.

Cabinet agreed to transfer 84 social housing units to the Housing Revenue Account  and 25 intermediate units to i4B and refinance the debt after consultation with those residents involved. Details of the consultation were not given, nor consideration of what would happen if they did not agree with the option the council put forward.

Cllr McLennan said that financial issues aside the first and foremost concern of the Council was to make sure tenants were safe.

It is worth noting that in 2019 in a guest post on Wembley Matters, Pete Firmin raised issues about building quality in another South Kilburn development LINK illustrated with this photograph. 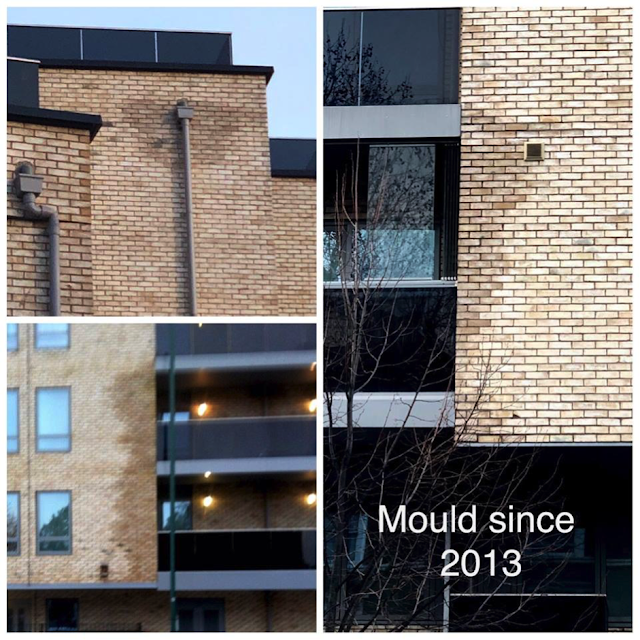 Comment received by email: As well as Stonebridge, Higgins are currently building Alphabet (formerly known as Chippenham Garden) and will launch the 30 homes for sale on the 6th Nov. 2021. I doubt that today's decision will affect the sales price, as most buyers will not be aware of it.

And if you beleive Cllr Margaret McLennan's comment that "the poor build of the Granville New Homes back in 2009 would not happen today" then you may be seeing a few flying pigs around.

Remember she said that the problems "had been known about for a number of years". Yes, on her watch. How did she deliver that presentation with a strait face? Answer is perhaps "practice".

And of course Southwood and Tatler knew nothing about it!!! Why not? And what about King Butt?

As I said in a comment before last week's Scrutiny meeting, councillors and the Cabinet needed to hear from residents at Granville New Homes before making any decisions.

Despite the assurance that 'the first and foremost concern of the Council was to make sure tenants were safe', it appears that no one from GNH was invited to the meeting to give their views.

Plenty of councillors and Council officers "knew about" the problems at GNH, going back years, so why was nothing done by Brent Housing Partnership or First Wave Homes (both "Council-owned")?

Now residents will be "consulted" on the Cabinet's decision, before it is implemented. What a charade of a consultation that will be!

'Do you agree the decision already made by Cabinet?' What's the alternative? Presumably, you'll be left with homes owned by FWH, which can't afford to carry out the remediation work that is necessary!

And the Council's Finance Director again skated over the detail of this "rescue package". No, FWH's debt to the Council was not being written off, it would be refinanced, he reassured the Cabinet.

Instead of a loan of £17.8m, secured on a property asset, FWH will have to be given a new loan from the Council which is unsecured, in order to save the Council's company from going bust.

But FWH won't have the rent from those 110 (minus one leasehold) flats in order to help pay the interest on that loan. If it can't find the money from somewhere else, it will still be at risk of going bust.

And in a year or two (that is, the other side of next May's local elections), the Council may well have to write off that £17.8m.

Its difficult to give any credit at all to Margaret McLennan's claim. When she was lead member for regeneration she denied there were any problems at all. (And don't forget she was notoriously `relaxed' about `poor doors'). She and subsequent lead members for regeneration and housing have always denied that any of the housing built under regeneration in South Kilburn has problems, regardless of the stage they were built. Until Brent's Cabinet starts to be honest about the problems of regeneration, residents will be sceptical about such claims.

All involved should resign, but like Bojo,they don't care and they lie

I really don’t understand this country. There appears to be a concerted effort from all levels of government to deny reality

I think that Simon (13 October at 10:53) has pinpointed an important truth.

I might not go as far as Anonymous (12 October at 22:46), saying that 'they don't care and they lie' (although some of it is patently untrue), but there seems to be a culture among those at the top in the Civic Centre to convey only positive messages in what they speak and write.

We see this every week in "Your Brent", with a smiling picture of The Leader telling readers all the good things that are happening in "his" borough.

We see it in press releases, with quotes from and photos of Muhammed Butt or one of his close allies in the Cabinet, publicising the wonderful work that "their" Council is doing.

Some of it is true, but it gives a very distorted picture, and is certainly nothing like the whole reality of life in Brent.

Why are Brent Council's official sources trying to "con" the people of the borough?

Unofficial sources of information, like "Wembley Matters", tell it like it is. And there was an excellent blog on "Life in Kilburn" recently, debunking the Council's (particularly Cllrs Butt and Southwood's) oft-repeated claims to be building 1,000 new Council Homes.

I was disappointed this week, when I was told that a pdf version of a recent article I had written for "Wembley Matters", promoting the Brent Libraries autumn programme, could not be shared on the Council's social media. I wasn't asking them to "tweet" a "link" to Martin's website, just one to a pdf document that could be published on one of the Council's own digital platforms.

The reason? Because "Wembley Matters" is a 'political website', and Brent Council is forbidden from publishing any party political material.

If much of what they do publish is not party political (promoting Brent's Labour administration), it is at least supporting the status quo at Civic Centre, and seeking to ensure that those in power stay in power!