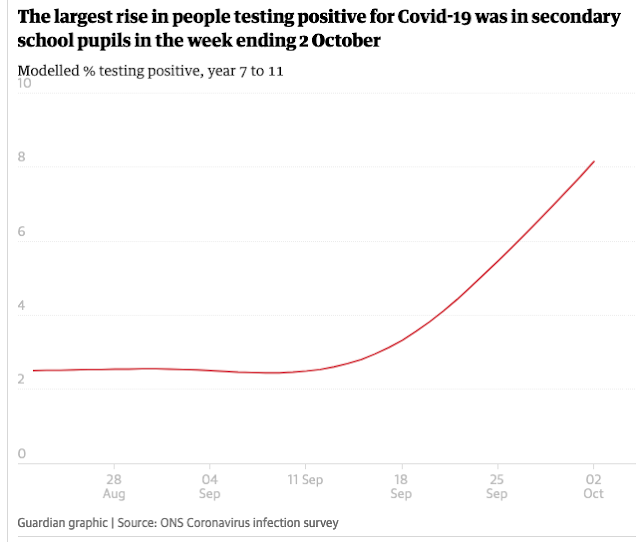 Five education unions have written to the Secretary of State for Education, Nadhim Zahawi, asking him to urgently reconsider the reintroduction of additional safety measures in schools, given the rising rates of Covid infection and absence among school students.

The five unions – GMB, NASUWT, NEU, UNISON and UNITE – will also be writing to all local authorities and directors of public health asking them to consider measures in their local areas.

The unions have pointed to measures now being readopted in several local authority areas in response to rising cases, including social distancing measures, reintroduction of bubbles, avoidance of large gatherings such as assemblies and meetings, and reintroduction of face coverings in secondary schools.

The unions have warned that without such measures, students’ education and the health of students, their families and school staff will all be damaged unnecessarily.

Avril Chambers, GMB National Officer, said: "Yet again we appear to have denial of the facts from this Government. Covid cases among school pupils are growing exponentially and it is clear further mitigation measures are needed immediately. School staff have kept our schools open throughout the pandemic: they deserve to stay safe and our children deserve not to have their education interrupted any more than it already has been. The minister needs to act now."

Patrick Roach, General Secretary, NASUWT said: “As cases rise, ministers need to look again at supporting schools with onsite testing into the spring term, rather than relying on home testing, which is less effective. There is an urgent need for the Government to consider reinstating the requirement for pupils to self-isolate if they are in close contact with someone who has tested positive. Proportionate safety measures and appropriate support for schools are essential in breaking the continuing chain of virus transmission.”

Kevin Courtney, Joint General Secretary, National Education Union, said: ‘We are concerned that the Government is standing by while COVID cases surge across schools. It is evident that more needs to be done, and sooner rather than later, to prevent further massive disruption to children’s education, caused either by children contracting covid-19 or covid-related staff absence. The most effective way of keeping children in educatiois to do more now to prevent the spread of Covid-19 in schools.’

Jon Richards, UNISON assistant general secretary, said: “Ministers must do all they can to stop continued disruption to classroom learning as infections rise. To offer pupils and staff greater protection, face masks must return right away, along with school bubbles and other sensible precautions that were ditched. Air filters are also key to limiting the virus spread and ensuring pupils have a more stable academic year.”

Jim Kennedy, Unite national officer for education, said: “Education secretary Nadhim Zahawi has a great opportunity to reset the safety agenda for schools, following the departure of Gavin Williamson. With winter fast approaching and with Covid still rampant the whole range of measures to keep school children safe needs to be deployed – the rising level of infections in schools demand it.”

The full text of the letter is as follows:

Secretary of State for Education

We are writing as unions representing school leaders, teachers and support staff to urge you to give all education settings the guidance and resources they need to keep pupils safely learning for the rest of this term. We began this term hoping for better times and a more normal feel across the education system but, as the weeks have gone by it has become clear that the DfE guidance published on 23 August requires urgent updating.

Thresholds in the DfE contingency framework for even seeking advice following cases are set too high; meaning that cases can already be spreading across a school before additional measures are considered.

Government data shows that confirmed Covid-19 cases amongst school-aged children surged to 102,000 on 30 September, a 67 per cent rise since 16 September. Over 204,000 pupils were absent from school on 30 September for covid-related reasons. Staff absence is also impacting on education with some children suffering disruption as a result of staff absence, and staff and leaders under enormous strain as a result.

It is unclear when the impact of the vaccination programme for 12- to 15-year-olds will begin to be felt and so in the meantime more needs to be done to prevent the spread.

Many other countries in Europe that have kept in place proportionate mitigation measures in schools, such as face coverings and quarantine of close contacts whilst rolling out a vaccination programme, and have not experienced the back-to-school surge in cases that we have seen in England.

In addition, a growing number of councils are now using the freedoms they have under the Department for Education guidance to bring in additional mitigations in schools. This reflects their responsibilities for public health, and also under health and safety legislation.

Staffordshire County Council for example is encouraging all schools to introduce a range of measures including to stop whole-school assemblies and bring back classroom bubbles and face coverings; all close contacts to get a PCR test; and reintroduction of staggered start, finish and lunch times because it is "time to be proactive" about rising cases.

Additional mitigations have been recommended in areas including Cambridgeshire, City of Wolverhampton Council, Cumbria County Council and in some London boroughs. For example, in Cumbria, siblings of children diagnosed with Covid should be kept at home until their test comes back negative.

These are all important measures that we believe need to be implemented across all schools. Combined with a relentless focus on ventilation, with use of HEPA filters where ventilation cannot be improved in any other way (a focus which will reap benefits far beyond the end of the pandemic) these measures could make a real difference in England.

Without a change of direction, we risk damaging the education of thousands of children at some point before Christmas. The health of some children, but particularly that of vulnerable staff, parents or grandparents, could be compromised.

This is an urgent problem, and we look forward to your swift response. We would also welcome the opportunity for an urgent meeting with you to discuss these matters further.

We asked Brent Council officers to bring in additional measures in schools that reach the DfE threshold. But they appear to be toeing the government line of minimum disruption to schools so no return to bubbles etc. However we know from our members that in the long term such an approach causes more disruption.