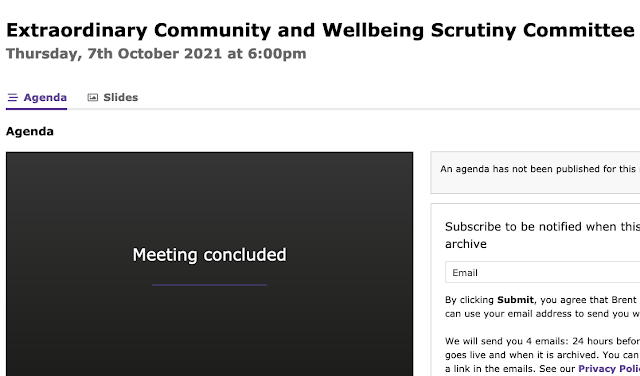 It looked as if Brent Scrutiny Committee was going to get down to the nitty gritty of the housing scandal that saw Brent Council paying £17.5m for the Granville New Housing in South Kilburn and now having to fork out £18.5m to remedy all the defects. A further issue is that Higgins the builder that built the faulty development is currently building more homes for Brent Council in Stonebridge.

After some excellent questioning from the chair, Cllr Ketan Sheth, Cllr Gaynor Lloyd and Cllr Mary Daly, officers were sent out so that the Committee could discuss their recommendations to Cabinet, who meet to discuss the issue on Monday morning.

Except that the public could not hear the discussion on the recommendations because the live feed to the meeting was abruptly cut off!

In the circumstances it is right that we should be suspicious.

There was much prevarication about when the defects had first been noticed and which part of the council they had been reported to.  Residents have told Wembley Matters they have been reporting defects in the housing built in 2009 for a long time but officers claimed that they had become aware only after post Grenfell surveys and a full intrusive survey involving taking out windows and cutting into walls

This meant that they were not 'fully aware' until May of this year.  The seriousness of the issues had not been picked up by Brent Housing Partnership, Brent Housing Management, First Wave Housing, Brent Council as Guarantor of the original loan or the Audit Committee. Cllr Kasangra who sits on Audit said they have been given the impression that 'everything was rosy.' They had been assured that the issues that came up in Croydon were not relevant to Brent - 'now we know that First Wave could have gone into liquidation!'

Cllr Lloyd challenged these expressions of ignorance quoting Cllr Janice Long as remarking that she felt guilty because 'we were always hearing about problems at these blocks.' Tenants had been complaining for a long time and it was nonsense for First Wave Housing to say that they didn't know.

In response to questions First Wave said they had had no discussions with Higgins about the defects since they had been discovered. They had been advised that there was no possibility of redress due to the passage of time.  Cllr Sheth asked why there had been no dialogue with Higgins given that they were still Brent Council's partner and even more important, why were they still a partner?

The officer responsible for Brent's actions as Guarantor was asked if he had received any complaints about Higgins and he replied that nothing had been brought to his attention.

Sheth said that the Council needed to think about how to get assurances from Higgins about their work. Cllr Lloyd asked if during the procurement process the past record of the company was taken into account before awarding the Stonebridge contract, for example.  The officer said that he couldn't provide an answer now but would provide a written answer.

First Wave were asked about consultation with residents. They had been told about the need for a waking watch at the time of the fire survey but only a few turned up to a zoom meeting, he added 'There hasn’t been too much response from residents.'

The head of housing said that even if residents did not attend meeting they were engaged with and they said they were very happy with their homes. He claimed that normally in such a situation residents would be at the meeting protesting but none had turned up tonight so this showed they were content.

The comment at the top of the page from a resident speaks for itself.

The report and Scrutiny recommendations will be discussed at Brent Council's Cabinet on Monday morning at 10am. LINK

It was sooo convenient for the director of First Wave Housing to evade questions on what the Council knew, as he was only at the meeting representing FWH.

He is also a highly-paid Strategic Director at Brent Council. Didn't he let his fellow members of the Council's Senior Management Team know that there were problems which would cost them (or should that be Council tenants and Council Taxpayers?) an estimated £18.5m, and possibly more?

2009? Which development is this? The one that looks like a speckled trout on Granville and Princess? Wasn’t that built with NDC monies…

Received via email: Residents of Granville have complained about how difficult it was to get to Wembley by 6pm tonight, after they have finished work and it will be impossible to attend on Monday at 10am as they will be at work.

Councillors have to attend in person, residents can still use Zoom.

One would almost think that this was by design

Re. Phillip Grant's point about the FWH director, Peter Gadsdon is Brent's Strategic Director for CUSTOMER and Digital SERVICES, a role which includes being the Council's Chief Information Officer.

He wasn't giving much information away last night!!!

I suppose three or four senior councillors should be considering their position, or perhaps their excuses. That's Regeneration, Property, Housing, Finance all now standing there as targets, not that the Labour Councillors will do anything about it, they are all too scared or part of the problem. Scrutiny did a really good job on them and the failing officers. The recommendations to Cabinet are damming and it happened on their watch. They should resign but won't.