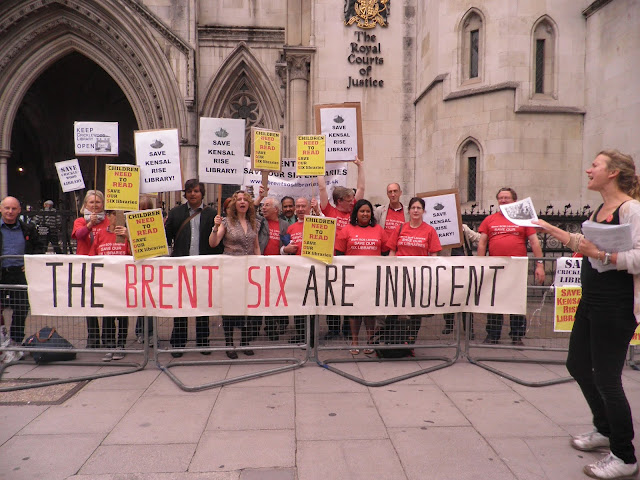 In the guest post below Paul Lorber, volunteer at Barham Library reflects on the battle against the closure of six Brent libraries, at the time half of the total libraries in the borough.  There were debates within SOS Brent Libraries over the issue - some wanted to concentrate on maintaining the provision of a locally accessible, properly funded professionally staffed library while others, although agreeing with that as a long-term aim, wanted to safeguard the actual buildings and stocks with  short-term volunteer led provision. Taking the legal route was an option undertaken only after considerable debate and produced national headlines. LINK

Four of the six were 'saved' one way or another but Neasden, despite being in one of the poorest areas in the borough had no high profile backing it and is now a church. Tokyngton Library, across the River Brent from St Raphaels Estate, was sold off to an Islamic Association in which  Muhammed Butt  was alleged to have an interest. LINK On the other hand Kensal Rise campaigners had access to a long list of celebrity authors to back their campaign.

The closures led evetually to the demise of   Council Leader Ann John, and her replacement by Muhammed Butt.  It is interesting to revisit the Open Letter that former Brent Labour councillor Graham Durham wrote to him at the time. LINK

Brent Council began to give some tentative assistance to the volunteer libraries but with no commitment to full reinstatement of the services, signing a Memorandum of Understanding with them in 2017.  LINK

Recently Preston Community Library after some internal disagreements, has moved to temporary premises while a block of flats is being built on the  redeveloped site with space for a volunteer library on the ground floor. 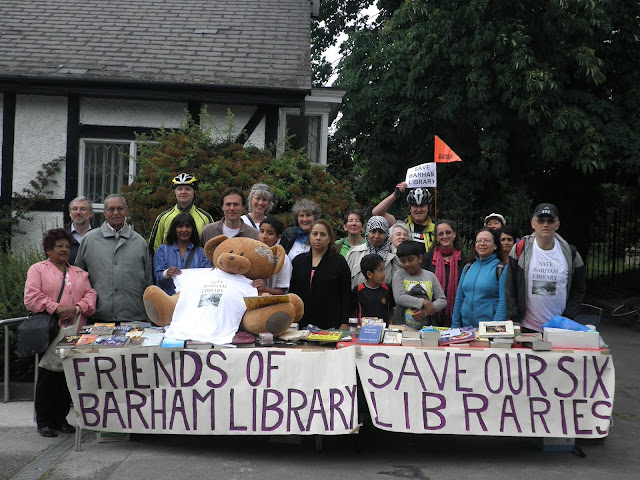 he second week of October marks 10 years since Labour Councillors in Brent put the final nail in and closed 6 public libraries in Brent. Libraries in Barham Park, Cricklewood, Kensal Rise, Neasden, Preston and Tokyngton were closed after a long battle to save them.

There was massive opposition to the closures proposed by the Labour run Brent Council with large petitions, protests and well attended meetings. Local Campaigners raised over £30,000 and took the Council to Court and it was only after they lost their case and the Judge denied them the right to appeal that Brent Council was finally able to close the 6 public libraries for ever.

What Labour Councillors did not expect was the determination of dedicated local people to fight on and establish their own Community Libraries to continue the provision of service to the public.

They decided to close 6 local libraries (half the total) to save around £1 million. Around 80% of that cost related to staff costs. Local people asked the Council to hand over the Library buildings so that volunteers could run the Libraries instead. This offer was refused despite the fact that 3 of the Library buildings were gifts to local people - Cricklewood and Kensal Rise from All Souls College Oxford and Barham Park from Titus Barham of Express Dairies.

For 10 years dozens of local volunteers have kept the dream of local libraries alive and 4 have survived - Barham Community Library has moved around between Barham Primary School, High Road Wembley and finally Barham Park itself and has been actively providing a service for 10 years. Preston Community Library eventually fought its way back into its own building and while Kensal Rise and Cricklewood Community Libraries had their old buildings sold to developers All Souls College, to their credit, insisted that space was made available to the reborn Community Libraries. Kensal Rise has been operating for some time and Cricklewood is hoping to open soon.

While the Community Libraries cannot compete for money and resources with Brent Council funded libraries they compensate for this with the dedication of their volunteers and their ingenuity in providing a wide range of local services. Barham Community Library has put on live theatre, Preston has a Film Club while Kensal Rise has put on Author and Comedy events. They all provide the usual book lending services and a wide range of activities for people of all ages.

Some of us have been around right from the outset. Over the past 10 years hundreds of people have helped and volunteered to keep the Community Libraries and the spirit of community service alive.

Today, while remembering the battles of 2010 and 2011, I just want to pay a Tribute to all those dozens of dedicated people who recognised the importance of local libraries and would not allow them to die. And of course the best way of recognising this achievement is by paying a visit and supporting your local Community Library in Barham Park, Cricklewood, Kensal Rise and Preston is by paying a visit and borrowing a book or two. 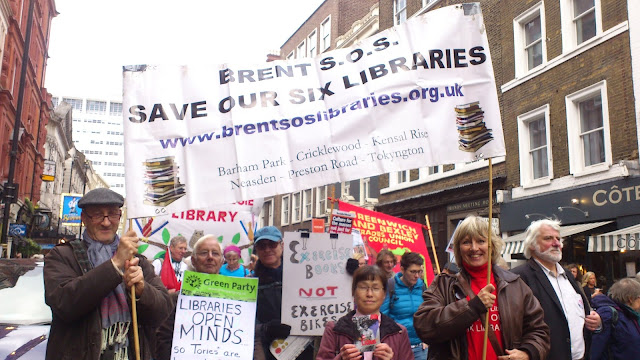 Brent campaigners at a national demonstration

I would be interested in other campaigners' comments on the campaign and what has eventually transpired.

ERROR Let's get this straight: All Souls College did not 'gift' the Kensal Rise Library building. It's therefore hardly to All Soul's College's 'credit' that instead of returning the Kensal Rise Library building back to the community after council closure, freeholder All Souls - which never paid a penny to build the library, contrary to what you state in your piece - sold it to a developer. Not only did All Souls College never pay to build the library, it is the third richest college in Oxford, with an endowment of over £420 million. Yet it still chose to profit from this windfall, reserving in the sale just 1500 square feet of the three storey building for 'community use'. And that, only because of the strength of the library campaign and attendant media attention.
Paul, you're an esteemed library compadre and thank you very much for your otherwise great article.