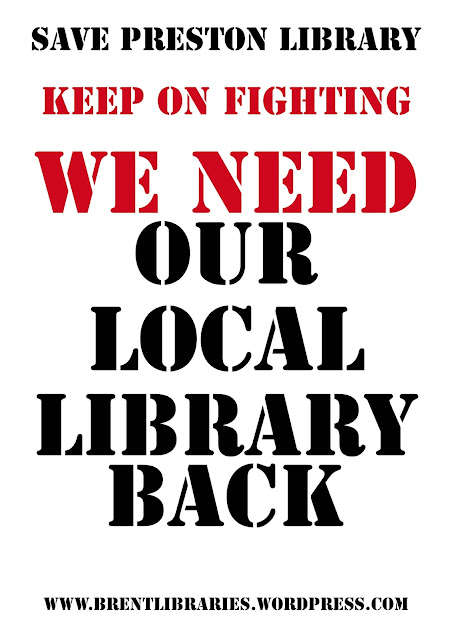 The Brent Council Cabinet is set to approve a Memorandum of Understanding on Community Libraries at its meeting on Monday.  In 2011 the Council closed 6 of the borough's 12 libraries in what they called the Libraries Transformation Projects. Local residents launched campaigns to keep four of the libraries open: Preston, Kensal Rise, Cricklewood and Barham. Neasden and Tokyngton libraries, the former in a very needy area, appear to have gone for good.

The SOS (Save Our Six Libraries) campaign was faced with the dilemma of campaigning for the retention of securely financed, professionally staffed libraries or keeping a local facility going through a volunteer system and fundraising. Some campaigners thought that keeping some kind of service going temporarily would make it easier for a future administration to restore the library.

The Brent libraries issue became something of a national scandal and contributed to Cllr Muhammed Butt's overthrow of Cllr Ann John's Labour leadership. In the event Brent's closures were ahead of the field and other councils, of various political complexion, have since closed libraries  citing government cuts as the reason. Currently there is a militant campaign in Lambeth LINK.

Since then there have been attempts by various lead members to reach an agreement with the volunteer libraries with Preston and Barham facing particular difficulties because the Council is the landlord of their premises.

The Officers' report LINK sets out the current situation: