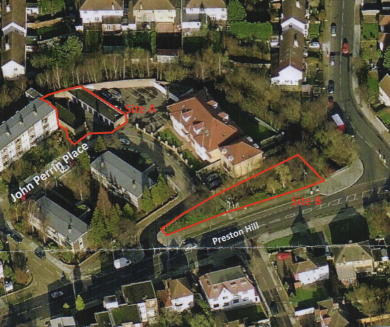 BHP and developer JLL are consulting on proposals to build on the site of garages on the estate (Site A above)  and on a stretch of hedgerow that borders Preston Hill (Site B). Residents say that BHP has not actively encouraged use of the garages by tenants and claim the hedgerow shelters the estate from air pollution and traffic noise. Furthermore, residents point out, as can be seen on site, Site B has a complex sewage/drainage system beneath it and the adjacent brook is liable to flooding.

Planning permission may not be straightforward as Brent Council claims to have lost the Deed of Trust, dated January 1950 with a Deed of Assent dated 14th July 1958, which was drawn up when the land was handed over to what was then the Borough of Wembley by farmer John Perrin for a recreation ground.  It is registered as a charity (12th January 1967) registration number 302938.

The charity's object is:


A recreation ground of the public in such manner and subject to such regulations in all respects as the Mayor, Alderman and Burgesses of the Borough of Wembley may from time to time think proper.

This is pretty broad and residents fear, if a precedent is set by acceptance of these proposals, that the attractive open space (presumably the original 'recreation ground') may eventually be built on. 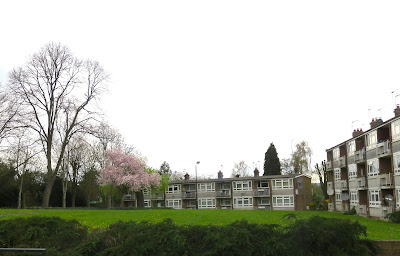 The only trustee listed on the Charity Commission site is Mr Martin Cheeseman, previously Head of Housing for Brent Council, with the address given as Mahatma Gandhi House.

John Perrin Place has 82 properties of which about 26 are leasehold and the others rented from BHP. The residents association say that the housing, mainly one bedroomed flats, was designated for people aged over 55 and for vulnerable adults. They fear that their small community is threatened not only by disruption caused by building works and loss of green space but by the eventual loss of its special designation. According to the residents' association many members of the community are elderly and not fluent in English so have not fully understood the proposals. This makes the effectiveness of future communication very important.


This is what Barnhill ward councillor Michael Pavey wrote in his Newsletter earlier this year:


Since the day I was first elected, far more people have contacted me regarding housing than any other issue. Families living in overcrowded conditions, people working full time but still unable to afford their housing costs, squalid conditions in privately rented accommodation: London faces a housing crisis.

The only solution is to build more homes. But where? No-one wants to lose greenspaces, we need industrial land to generate jobs and we can’t let London sprawl endlessly into the countryside. This leaves “in-fill” sites: small pockets of land in developed areas. And that’s exactly what’s being proposed at a couple of sites just off Preston Hill.

Myself and Cllrs Choudhary and Marquis can see both sides to this issue. On the one hand, these plans will deliver six desperately needed new Council homes. On the other hand, the proposed sites are in John Perrin Place: a quiet and peaceful community with many elderly residents.

With the arguments so finely balanced we are adamant that the views of local residents are heard loud and clear. So we arranged for the Council to have a consultation session and we knocked on every door in the area to encourage residents to get involved.

It was great to talk with so many people and currently I’m thinking that the huge benefits of the new homes outweigh the undoubtedly negative impact of the construction period – but I’d very much welcome your views before I commit either way.

The Council have already rented a 1 bedroom flat meant for over 55's to a single parent. The child will have no other children on John Perrin to play with. What are the Council thinking ? These flats are for single people or married couples. So Brent Council will disregard everyones opinion and build these flats any way.

Not all of these flats are owned by the council.