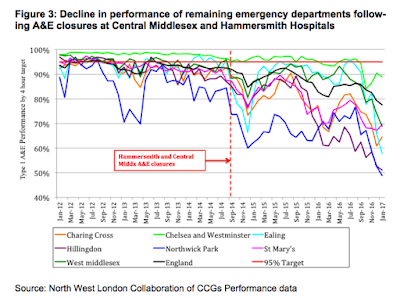 Closing A&E departments has led to a deterioration in the performance of those that remain in North West London. An anaylsis by Dr Gurjinder Singh Sandhu for the Centre for Health and the Public Interest warns of the risk to patients if further A&Es are closed.

Across England NHS Sustainability and Transformation Plans (STPs) are proposing the closure or ‘downgrade’ of up to 24 emergency departments.

This analysis shows how A&E performance has suffered across North West London following the closure of two emergency departments in 2014.

Performance against the 95% 4-hour wait target dropped to as low as 60% shortly after the closures, meaning that up to 40% of patients requiring serious treatment had to wait over 4 hours to be assessed and admitted to an appropriate bed. Since then the performance of North West London hospitals has been some of the worst in the country, sometimes managing to treat fewer than half of the patients within four hours. For time-sensitive conditions such as sepsis or respiratory failure such delays are life-threatening.

In addition, since the A&E closures in 2014 the bed occupancy rate in all hospital trusts in North West London has been above 85%, compromising clinical safety through overcrowding.

This paper also points out that the closures aggravate health inequalities, hitting the most deprived boroughs in the region. (See image below) 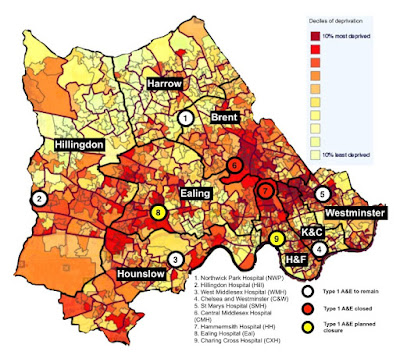 So happy my Doc always refers me to St Mary's, who these days wants to go to the Butcher's Shop Northwick Park. Not in my lifetime unless I must be unconcious, and at deaths door, before they take me there. Have to say, Critical Care at Central Middlesex, Park Royal is absolutely fabulous, prompt service, very good doctors, and quickly seen. Definitely the place to go .

I seem to have had good treatment at Northwick Park...