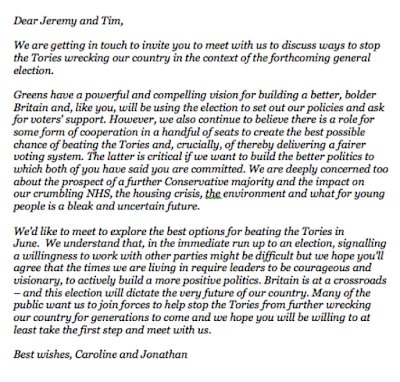 The co-leaders of the Green Party, Caroline Lucas and Jonathan Bartley, have written to the leaders of Labour and the Liberal Democrats urging them to unite to stop the Tories ‘wrecking Britain’. Lucas and Bartley are calling for a meeting between party leaders to discuss ways to beat the Tories at the General Election and deliver a fairer voting system.

In their letter to Jeremy Corbyn and Tim Farron, Lucas and Bartley listed a ‘crumbling NHS’ and a ‘bleak future for young people’ as reasons for parties to work together. They also said that working together is key to prevent an ‘extreme’ Brexit inspired by the Tories, UKIP and the DUP.

The call from the Green Party comes after senior figures in Labour – Lisa Nandy, Clive Lewis and Jonathan Reynolds – called on their party to consider standing aside at the Richmond by election last year.  In that election the Green Party stood aside, helping the Liberal Democrats defeat UKIP-backed Zac Goldsmith.

The Green Party expects to stand in seats in ‘every corner of the UK’ in the General Election on June 8th – but are asking Farron and Corbyn to explore options to stand the best chance of beating the Conservatives. At their recent conference the Green Party membership instructed their leaders to explore electoral alliances with other parties to beat the Tories.

Caroline Lucas and Jonathan Bartley will make further announcements in the coming weeks on their plans, but insist that any agreement between parties must be made at a local level by ordinary members who share an interest in defeating the Conservatives.


Britain is at a crossroads – and this election will dictate the very future of our country. The Green Party will be standing on a unique policy platform – opposing the Tories’ Brexit and putting forward big ideas for a fairer economy and the protection of our environment. Our call for a meeting between party leaders isn’t about the Greens standing aside – it’s about giving people in this country the best possible chance of defeating the Conservatives and bringing in a truly democratic voting system.
“For the sake of our NHS, our welfare state and our environment we need progressive party leaders to ditch partisan politics just for a moment and think about how we can best stop the Tories from wrecking our country for generations to come.

Note: I personally would not want to make a deal with the Liberal Democrats after their performance in the Coalition and the decision not to enable re-selection of Labour MPs also presents a problem giving the approach of many of them to Corbyn's leadership.
Posted by Martin Francis at 14:00:00