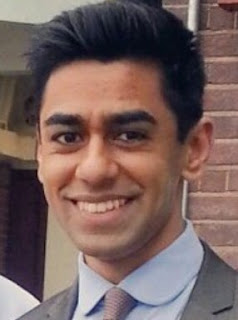 Brent North Conservatives have selected Ameet Jogia as their candidate to fight Barry Gardiner in the General Election. Paul Lorber will stand for the Liberal Democrats and the Greens are still to select their candidate.

Jogia has been a councillor in Harrow since May 2014 when he received the highest Conservative vote and is said to be an admirer of the controversial Indian Prime Minister, Narendra Modi. Barry Gardiner is also a Modi fan.

The previous Brent North Tory candidate Luke Parker is short-listed for Richmond Park where he has family connections.

Cllr Jogia himself has a fan club being hailed as 'The Tory Blue-eyed Boy' in the Asian Times LINK after his maiden speech at Harrow Council.

His speech centred on  his experience as a homeless child in the 1990s and how Harrow Council helped the family back on its feet.

Is Conservative Party in Harrow and Brent North now franchise of fascist Modi's BJP (Bharatiya Janata Party). Tories used picture of fascist Modi in their leaflets that were allegedly sent to Hindu households only during the 2016 London Mayoral election but that backfired

Modi was banned from entering the UK for more than a decade – until he became Prime Minister in 2014.

Barry Gardiner is a Labour Friend of Israel and also a fan of Hindu nationalist Modi? Really?
I can see that there might be a few votes in it for him but doesn't he worry that this particular combination might look a little, well,consistently anti another group of people in 2 different areas of the world?

Barry is keeping low profile as Labour Friend of Israel and as a fan of Hindu Nationalist Modi, must be scared of 16000 Muslim electorates.

'Blued-eyed' Councillor from a very safe Conservative ward. I suspect he will run his campaign similar to Zac Goldsmith 2016 Mayoral election campaign and will only target Indian Hindu Gujarati electorates.

I hope the best one to beat. Those who think for the good of people will win.

Particularly as if the proposed constituency boundary changes had taken place Brent North would not exist and there is no certainty that he would even be the prospective candidate for Labour in the new constituency covering much of the target electorate.

It will be an interesting election, that's for sure.

Blue eyed boy? These tories will lie about anything.

Barry as a Labour Friend of Israel? Don't make me laugh, he's close to Corbyn, criticised Israel for defending himself and his policies (and that of the Blair/Brown Government) are responsible for much of the anti Israel/anti Zionist/anti Semitism that exist in the UK today.

Barry will be friends with anyone who may give him money. Search online for 'Barry Gardiner' and 'China'.

I think we can probably guess what your definitions of 'anti-Semitism' and 'Israel defending (it)self' would be. Your conflation of 'anti-Israel', 'anti-Zionist' and 'anti-Semitism' is the Israeli government line to the letter.
Whether anyone promulgating that line is truly a friend of Israel is another matter.

Anonymous 10.58
I did that but the first 3 on Google were the Times, the Sun and the Daily Mail. can you give me a less scurrilous source, please?

The leaflets were in bad test,but when you look at the ward by ward v Indian voters Tories did the highest share and that must be concerning and when look at the numbers Tories had slightly numbers, Khan got in via top up mainly Lib Dem switching.
Again look at the EU numbers although majority was IN when you look at Brent North and Harrow East it was close.
Never underestimate Lynton Crosby when it comes to voter profiling and voter targeting. He even know what brand your pets favourite pet food. It called bigdata and millions have been spent by his company. Do also remember, he dont care much for politics his company provides services to Liberal Party in Australia and have joined forces with Obama's social media Tec team. I am hearing he has said to the tories all seats are a targets. Todays local election will give us a clue were this is heading and sadly the nationalist are winning, be it be in Scotland with leftwing SNP or Tories in England.