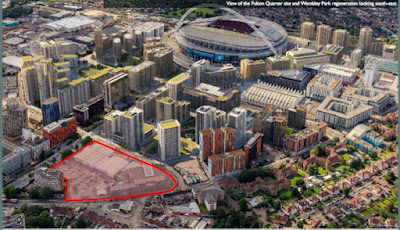 Following the March consultation LINK Quintain have come back with revised plans for the Wembley Retail Park/Fountain Studios site and will be mounting a public exhibition at  the London Designer Outlet next week. The exhibition will be at Unit 71 on the first floor on Thursday 20th April 4pm-8pm, Friday 21st April 4pm-8pm and Saturday 22nd April 10am-2pm.

Quintain are calling this the 'Fulton Quarter Masterplan' and apart from new homes and commercial space are now suggesting a 'new higher education facility' . The College of North West London is next to the site.

Additionally, in what seems to be a departure from the long-term plan to make the Wembley Stadium area a 'public transport destination', they will be presenting proposals for a new coach park and multi-storey car park at VDC Careys and a build to rent development on Plot E05.