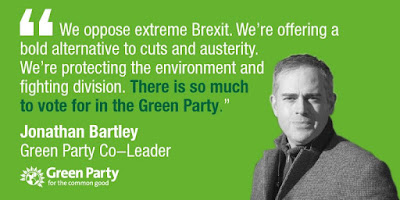 The Green Party has responded to Theresa May's announcement of an early General Election with Caroline Lucas MP promising a 'bold, positive vision for a different kind of Britain' while co-leader Jonathan Bartley said that the Green Party would give people a 'real alternative to the politics of the past'.


Britain is at a crossroads – and today’s announcement means that people are rightly given a say over the direction this country is going to take. Only the Green Party offers a bold, positive vision for a different kind of Britain. At this election we will stand for an economy that works for everyone, not just the privileged few; a Britain that’s open to the world and the protection of our precious environment. We will stand up to the politics of hatred and division that is scarring our communities and give people across the country a chance to vote for a better Britain.


Theresa May’s announcement today reveals a deep dishonesty at the heart of Government. Despite numerous denials of a plan for an early General Election she has u-turned. The Green Party is ready for this seismic moment in our country’s future. We will be standing candidates in every corner of this country and giving people a real alternative to the politics of the past.

I am not a member or supporter of any political party, but I feel that Theresa May's attempt to "spin" this call for a general election as a need to get stability for the Brexit negotiations is misleading.

What we will be voting about on 8 June, if (as expected) Parliament approves an election, is what type of government policy this country will have to live through for the next five years.

If not, are we prepared to pay more through taxes for a better quality of life for everyone?

It is answers to questions like these which I will be looking for in deciding which candidate to vote for, as well as the important wider party philosophies on matters such as 'protecting the environment and fighting division'.

Yesterday I turned to the Guardian home page to look up about LB Brent's record on social dumping when I should have followed my instincts more than my correspondent's reference to 'Saturday's Guardian'. Thus I happened to see the Guardian flagging up May's announcement 'live' and was very glad that I did not have my PC speakers turned on!

I later responded to the announcement with a Kilburn Unemployed blog post: Let us not help Theresa May bury the bad news about Universal Credit rollout, suicides and homelessness under a Brexit General Election.