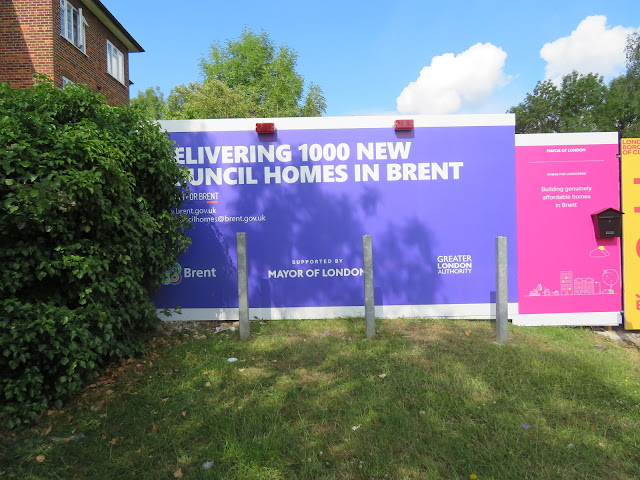 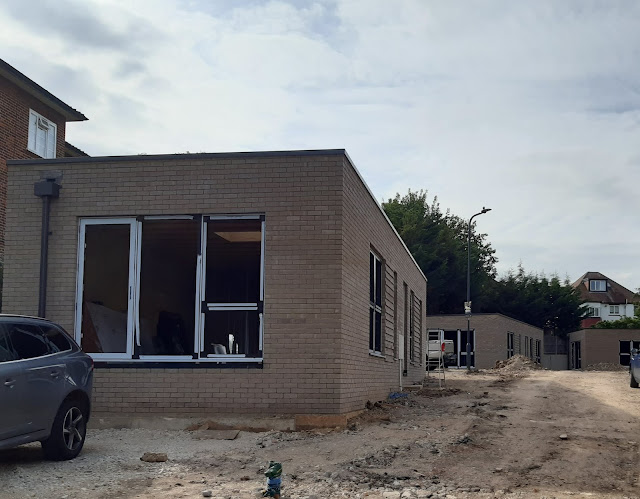 The bungalows on the former garage and car park site

Dawn Condouriodise,  a long-term resident of the Kings Drive council estate has turned to Brent North MP Barry Gardiner, in a desperate attempt to draw attention to the problems posed, especially for the elderly and lone women, by the removal of parking places on the estate:

You may remember back in 2017, myself and all the residents here opposing Brent Council’s plan to demolish our garages and car park (Your ref. MB/ZA23665), to replace them with ‘affordable bungalows’, although when my neighbour enquired about putting her name on the list for one at a Brent Housing Partnership meeting, she was told by a representative, that she couldn’t afford one.Firstly, they sold our Grade II Listed Town Hall to the French school at the bottom of what was our relatively quiet road, and Kings Drive has been lined with parked cars connected to it ever since.  Despite the council’s own parking survey confirming 100% occupancy, and a petition signed by all the residents (council and private), they went ahead and bungalows (with parking and gardens) are now being completed.I was evicted from my garage of 15 years and 6 weeks later, after parking my car where Brent Council suggested; Greenhill, a quiet turning off Kings Drive, and where a man was previously found shot dead in his car, my car was stolen, and I’m forced to continue parking there every night when I return from visiting my mother in a nursing home, as there is no space closer to home.All the residents here are resigned to the fact that Brent Council has no concern for residents but what they are planning to inflict on us this time, is the most stress inducing yet. 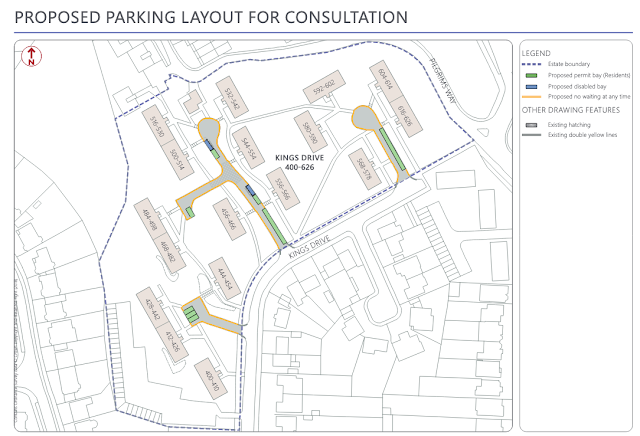 All Kings Drive residents have received a letter informing us that, not content with taking away our main car park, Brent Council now intend painting double yellow ‘no waiting at any time’ lines throughout the area, which according to their plan will leave approximately 12-14 parking spaces for 114 flats. Their letter also states that there will be no parking for visitors. Of course, that will include carers, district nurses, deliveries, services. The list goes on, and would halt visits to elderly or disabled who rely on their children to take them out. Those that do drive will be hesitant to venture out because they won’t be able to park when they return, which would force them into isolation. I wouldn’t even be able to stop outside to bring bags of shopping up, before driving back out into the night in search of somewhere to park, so would have to carry it all back, and I don’t know if I could with my painful arthritic hips.You may remember I previously mentioned that we live at the top of one of the steepest hills in Wembley with our closest public transport a long steep hill down one side to the main road, and a steep walk the other side down to the end of this large cul-de-sac and a quiet bus stop, where residents don’t like to go because of previous muggings there; and at one end of Fryent Country Park, where 2 sisters were found murdered last year.As you can imagine, everyone here is shocked and worried, because if this plan goes ahead, it will leave all of us (but 12-14) forced out onto the streets beyond to search for somewhere to park (where most streets already have yellow lines).  We have all seen the horror stories on TV News and in the newspapers about women being attacked walking home at night. Being forced to park away from home would put our safety at risk, and mine already is.Brent Council have brought more traffic here and the residents, some who have lived here for over 50 years like me, are suffering as more and more space is taken away.Apparently, they are engaging with a parking enforcement agency in order to fine us if we do park on the yellow lines and plan to charge us for parking permits for 12-14 spaces?  If they want to fine people for parking irresponsibly, then so be it, but to even consider forcing residents (many of them elderly) and myself, a lone woman, out into the abyss to search for a place to park without a yellow line is despicable.We could get another petition opposing this plan signed by everyone here, although we know from past experience that it would be completely ignored by Brent Council. They will go through the motions of surveys and consultations, but residents know that they have no interest in our views, will overrule any opposition, and it seems, will go to any lengths to build and increase the coffers, despite the consequences and safety of the residents they are supposed to be responsible to/for.Is this what we pay Council tax for? To make our lives as miserable as possible?

Well done to Dawn for contacting her MP, and explaining the problems these proposals will cause for Kings Drive residents so clearly.

While congratulating her, I'll also repeat the advice that I gave in a comment on an earlier blog:-

I think that this is too important for residents living on the borough's Council estates to ignore.

I would encourage all of them who have a view on parking on their estate to email their questions and/or comments to:
Estate.Parking@brent.gov.uk

I would also suggest that they copy those emails to their Ward councillors. Many of those councillors will be putting themselves forward for re-election next May. What action (if any) they take over dealing with your concerns may help you to make up your mind over whether to vote for them, or someone else, in those local Council elections!

(But do please vote when those elections come round - it's your once in four years chance to actually make a difference).

Let's face it, the current Brent Council leadership don't give a fig for its current Brent residents, but don't they just love their friends in the building industry, and perhaps some more than others!

I happened to walk the canal tow path behind the current Alperton development. I wanted to see all the countryside that they will be enjoying on the far bank of the canal as can be seen in the sales brochures. Well, if you think all the industry on the other side looks like the countryside........ Let's face it, they lie to us all the time, sorry misrepresent, talking about lying, there were a lot of dead rats lying about on the tow path.

Poor old Brent, the council are destroying our businesses by demolishing industrial sites like the Alperton ones so the can support the building of yet more unessesary residential properties with 'workspaces' - they are joking aren't they? And what's the outcome, yes, more and more unemployed Brent residents.

This current Labour Administration is as bad as our current Government in Westminster in so many ways.

If anyone reading the "Delivering 1000 New Council Homes in Brent" slogan, on the blue hoarding in the photograph above, wants to know the reality behind that claim, I suggest that they read this well-researched article on the "Life in Kilburn" blog:
https://lifeinkilburn.com/brent-council-1000-new-council-homes-programme/

Delivering 1,000 new Council Homes ......... the majority are at market rents no doubt, or cooked afordable rents

I find the claim that women's safety is further compromised by removing parking spaces to be ridiculous and manipulative. Parking lots are notorious as sites of criminality and especially for crimes against women. The best way to ensure public safety is to have affordable, high quality, and frequent public transport, well-lit pavements and streets, and pavement traffic with walkers and cyclists at all hours. The 'solution' to address fear of crime by creating parking is a band aid that doesn't even work. Cars are dangerous, they take up far too much public space that can better be used by cyclists and pedestrians, and they pollute.