Battle against forced academisation is a fight for democracy - Roke parents 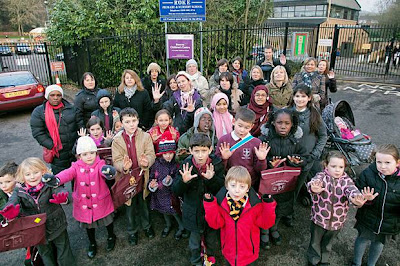 With Gladstone Park Primary parents continuing their campaign against the school being forced to become an academy and suggestions that this might happen to other Brent primary schools, it is worth hearing about the experience of parents in other parts of London. Roke Primary in Croydon has also experienced the bullying nature of the DfE's  'brokerage' department and the parents' campaign has written to the local paper about the experience: LINK


Parents recently received a copy of a letter about forced academy at Roke Primary school from Lord Nash, Parliamentary Under Secretary for Schools to Richard Ottaway, our Conservative MP for South Croydon.

Lord Nash's letter casts Roke Primary as an 'underperforming' school, yet our school is not underperforming under any possible definition of the word and certainly not over a 'long time', which is specified in DfE's own guidance for forced academies. The latest SAT results are above the national average and place the school in the top 20% of Croydon schools. Teaching is regarded by Ofsted, the Local Authority and parents as at least good. Let's be clear forced academy at Roke is NOT about substandard education at Roke.

The reason the school is being forced to academy is that it was placed in an Ofsted category of 'Notice to Improve', mainly due to a lack of data caused by computer problems and leadership/management issues. The Ofsted report was published in mid June 2012. Areas for improvement were outlined and the school, LA and Riddlesdown (as partnering
school) sprung into action and made positive changes very quickly. Yet only 3 months later, in September the DfE informed the head governor that Roke would become an academy.

Factoring in the school summer holiday, the school was given less than 6 weeks to improve. There was no return visit by Ofsted to check on the improvements made and no chance to prove that they could be sustained. This action defeats the purpose of giving a school 'Notice to improve', if they are then denied the chance to demonstrate improvements made.

Lord Nash states that improvement is required in relation to leadership and management. This could happen without removing the school from Local Authority control. It does not need such drastic action as being forced, against the wishes of parents, governors and local community, to become an academy and to be sponsored by Harris.

It would be far more cost effective to simply replace the leadership. Let's make no mistake this is about political ideology not standards.

Lord Nash omits the fact that the Ofsted monitoring visit happened in January 2013, the day after parents launched their campaign and a damning article appeared in The Guardian, stating that Oftsed had not visited before the decision was made. He also omits to make it clear that this was not a full Ofsted inspection and therefore it did not matter what rating for improvement was received it would not lift Roke out of the 'Notice to Improve' category. His letter reads like Roke somehow failed to improved enough to be reclassified which is untrue.

Furthermore, we have been told that the Ofsted inspector said on arrival before the monitoring inspection took place, that Roke would not get a rating better than 'satisfactory' because there was insufficient time between inspections to prove that improvements had been embedded or were sustainable. This is the real reason which, as Lord Nash writes, there is 'limited evidence that (improvements) are secure and sustainable'. It has little to do with the school's efforts but rather with the government failing to give the school enough time to achieve this within its' own inspection frameworks, before rushing to turn the school to an academy.

Lord Nash says, 'Harris has confirmed that it wishes to support notice to improve and bring about the improvement needed' at Roke. Therein lies the crux of the matter. It is highly likely, if a full inspection was to take place today that the school would perform much better, and would come out of 'Notice to Improve' or its new equivalent category.

As it stands, Harris will simply come in and take all the credit for improvements that have already taken place. We believe that Roke may have been targeted as a school where, a relatively small nudge is needed to return us to our previous 'outstanding' status. This will give Harris and academy policy false credibility.

Lord Nash says that the government recognises the 'importance of formal local consultation' and that it is 'a legal requirement before any school can open as an academy'. We suggest that his definition of 'consultation' is different to everyone else. His letter makes it clear that all decisions about Roke, its future as an academy and its sponsor have already been made. To suggest that consultation takes place after the fact is ludicrous. Moreover, to suggest that the consultation is most meaningful when it is run by the preferred Sponsor, in this case Harris, is also ludicrous and bordering on corrupt.

The consultation must be operated legally, and cannot be a presentation or a deliverance of a decision already made - it must be legally meaningful. It must be an actual consultation - you consult and decide as a result, not in advance.

As it stands key decisions about our school have been made behind closed doors before consultation has taken place. The DfE is withholding crucial information about the decision making process, as evidence by failure to disclose information requested by parents under the Freedom of Information act. The DfE has also flouted its own rules regarding forcing a school that is not actually failing. The DfE is not operating by the Principles set down by the Committee of Standards in Public Life (1985) particularly the principles of accountability, openness or honesty.

Put simply, our own British government is breaking all the democratic values that this country holds dear.

The Save Roke Campaign Committee

A new 38 degrees campaign against forced academies and privatisation by stealth was created today that suits your cause :