Sarah Teather to meet with parents over forced academies 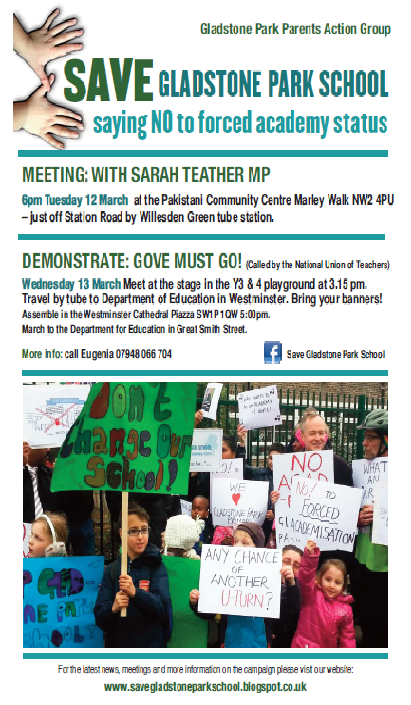 Gladstone Park Primary School Parents Action Group is to meet with their local MP Sarah Teather to hear her report back on a meeting she has had with Michael Gove on the forced academies issue. Sarah Teather worked in Gove's department until her sacking at the last reshuffle.

When in opposition Teather was a vociferous opponent of Labour's academy programme but appeared to change her mind when she became a minister in the Coalition and took action to enable special schools to convert to academy status.

The latest strategy shift, in which Gove forces primary schools to convert to a sponsored academy after only one poor Ofsted result,  may be a policy that Teather finds repugnant. Certainly her democratic principles must be offended by the bullying nature of the 'brokers' who are charged by the DfE with the conversion process, the refusal to consult until AFTER governors have accepted a sponsor, and the failure to take account of the views of school staff and parents.  The most glaring issue is that the process does not at present allow any of the parties involved (staff, parents, governors) to reject forced academisation outright.

The meeting is public so I am sure if you are interested in the fundamental issues raised by forced academisation that you will be welcome to attend. It is expected that some of our Brent councillors will be attending.