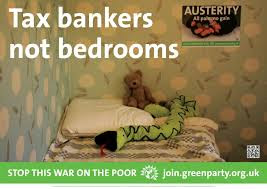 A council has declared that none of its social tenants will be evicted if they cannot afford to pay the government's forthcoming bedroom tax.Brighton and  Hove City Council has become the first local authority in the country to take such a stance.

"As Greens, we cannot throw people out onto the streets just because they're unable to pay it. I will therefore be bringing proposals that seek to ensure no household will be evicted from a Brighton and Hove City Council owned home as a result of ‘spare room subsidy’ rent arrears accrued solely from that household's inability to pay this unjust bedroom tax."

She added that steps would be taken to ensure that tenants don't take advantage of the proposals, and that officers would have to be satisfied that those pushed into arrears by the bedroom tax were doing everything they could to pay their rent.

Brighton Pavilion MP, Caroline Lucas, is also backing the proposals. She said: "The so-called bedroom tax legislation is not only morally wrong and a cause of great potential hardship, it is also unworkable in a city with a long waiting list for smaller properties.

"The council cannot downsize households on the scale required by the government, nor would we want it to, and we should not be prepared to evict hard-pressed families, the disabled and other vulnerable people purely because they are unable to pay this unjust levy on a home they either cannot or should not have to leave.”

Chair of Brighton and Hove Green Party, Rob Shepherd, said: "This government is willing to see people thrown out onto the streets purely because they can't pay their bedroom tax.

"They can be sentenced to homelessness simply for trying to maintain a normal, liveable family home. The Conservative and LibDem coalition government should be ashamed of itself and, as Greens, we will have no part of it.

"I congratulate the party and councillors who are taking such a principled stand. We call on the other parties to support us in protecting, in this way, some of our most vulnerable residents."
Posted by Martin Francis at 19:26:00

if you smoke you end up damaging your health...and why pay for something that will give you lung and throat cancer?
likewise when you waste your time voting you may not get lung or throat cancer but you get no end of stress and pressure and in many cases evicted thanks to this bedroom tax.
It really is time to stop falling for this democracy nonsense...David Cameron may be a millionaire and posh and prime minister but there is more to life than having loads of money and when your prime minister and you do like what he is doing you can be forgiven for wondering what he is on?

The nightmare that is today's Brent Council — an outline of the corruption, incompetence and complacency permeating this parasitic organisation...the views of a person which I have to say I agree with more and more as the years go by.
this year Brent council is forcing me to pay £794.67 towards council tax this year and yet I am unemployed and even Though I have some savings it's not a huge amount and if I don't manage to find a job
my savings will be virtually eaten up by the council and its tax and I'm not happy about that especially when despite getting this tax from the public the streets and green areas of Brent remain dirty and that cannot be justified especially after we have paid for the pavements streets and green areas to be cleaned up.
it's not fair and I feel like I am being robbed by the council and then to add insult to injury they allow litter to remain on the streets and green areas and don't even unblock the street drains.
many a time I have seen street drains in Brent and they were blocked solid with dirt!
that is unacceptable and yet that is the norm in this crooked corrupt borough.
and the strange thing is if we the public refuse to pay the tax we are taken to court and face being charged with breaking the law
but the fact is the council break the law all the the time because they never make sure the public service we pay for via the council is carried and done to an acceptable and fair standard.
so we the council tax payers are being conned by the council and the people who are paid to keep our streets and green areas clear of all litter.
yesterday morning I phone the council tax inquiry line and spoke to a woman and when I asked her who is responsible for clearing the street drains she she was reluctant to give me an answer and I assume that was because although she predictably started off talking up the council and saying it maintains a high standard when it comes to street cleaning( which I didn't believe of course because what I see everyday and what she said are two different things.)
one is the reality i.e. the streets of Brent are a disgrace because the public use the pavements and green areas to drop litter.
and the other is the delusion in that despite knowing that Brent does not have a good record when it comes to keeping the streets and green areas free from litter, this woman tried to convince otherwise.
anyway I decided to draw her attention to the street drains that are regularly left blocked solid and asked her who is responsible for clearing them?
she was reluctant to answer and kept trying to change the topic but I stood my ground until she finally said it was Brent Council's responsibility to clear the drains and so I told her about the drains I have seen in different parts of the Borough and all were blocked solid with dirt and that if she expected me to believe what she had been previously kidding herself and trying to mislead me with why those drains left blocked up with dirt if the council has a high standard when it comes to street cleaning and drain clearing?
at this point she suddenly decided to hang up on me which although I felt offended It didn't surprise me that she could not cope because the truth is she knows that the council cannot justify taking almost £800 from my life savings while it continues to allow our streets and green areas to be daily covered in litter and the street drains of Brent are daily left blocked solid with dirt.
one day I will go out with my mobile phone and film what what I have written about so that if anyone doubts me they will be convinced when they see the street drains that are crammed with dirt and left like that for ages and in the meantime we are expected to carry on paying the council tax and what are we paying for?