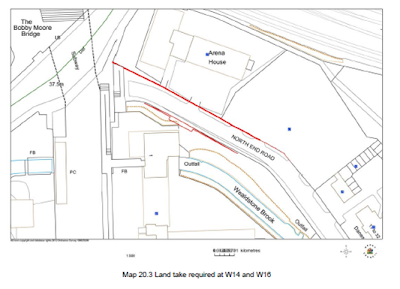 Controversial plans to reconnect North End Road in Wembley with Bridge Road at the Bobby Moore Bridge, beside Wembley Park Station, (see plan above) remain in the revised Wembley Plan which the Brent Executive will approve for consultation  this evening.


When the original plans for reconnection were published four years ago LINK they attracted opposition from the Wembley Community Association which wanted to keep the low traffic levels of North End Road which serves the quiet residential area of  Empire Court and Danes Court.  At present the road ends in pedestrian and cyclist ramps at Olympic Way between Arena House (soon to be a secondary free school) and 1 Olympic Way. Since 2009 the Victoria Hall student accommodation has been built on North End Road.

Brent Council say that 'a new road link at North End Road is a key component of the overall strategy enabling the promotion of highway access into Wembley (and beyond) from the North Circular'.  They claim that the new connection will benefit the development area during stadium events and reduce traffic along Neasden Lane and Forty Lane 'allowing prioritisation for non-car modes. The connection may also facilitate improvements to bus services, depending on results of the bus strategy'.

Henry Lancashire in his submission to Brent Council says that the proposed link will conflict with the popular bus stop opposite Wembley Park Station and increase the danger of pedestrian access to the bus stop. He states that the current access enables cyclists to take a safe route from the Brent River Park and can only increase in popularity if the proposed cycling/pedestrian bridge across the Chiltern Line from St David's Close is built. Brent Cyclists also express a preference for the link from North End Road to Bridge Road to be for cycling only. They state 'This would be far cheaper to implement than a connection for motor vehicles, and, with work and highway adoption or land-take in the Atlas Way/Fourth Way/Fifth Way area, could provide a viable, high-quality corridor for walking and cycling via the Brent River Path all the way from Stonebridge Park to Bridge Road.

Lancashire suggest that the required land acquisition for the link will be a) costly and b) damaging and in particular that the green space associated with the river opposite Victoria Hall will be lost: 'This is a valuable wildlife corridor used by species including wrens, robins, blackbirds and pipistrelle bats'.

Brent Council respond that the bus stop will be moved 'slightly to the south' and will be accessed via the Olympic Way underpass (people  dash across the road at present and I don't really see that changing).  They say negotiations are still going on for land acquisition and they are trying to keep the costs down: 'The scheme has been revised to remove the need for land from Victoria Hall'.

In their submission to the Council Quintain Estates and Developments state:

I am currently trying to find the likely cost of the proposal which in 2009 was put at £20m.

Not £20m just to reconnect the road!

I have sent an email to the officer dealing with this to ask for an estimated cost. It does involved considerable building work to build a slope back up to Bridge Road and removal of the present ramps and steps, relocation of bus stop etc, but yes, still seems a lot.