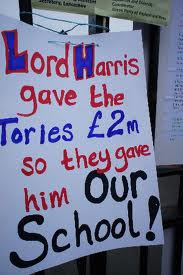 The Save Roke parent group, along with school governor, Malcolm Farquharson have instructed a lawyer specialising in academy law to prepare a legal challenge to the plans of Michael Gove to hand their primary school over to a private academy.

The group started fund raising on Tuesday and they received their target amount within 24 hours.

Roke campaigners believe that they may have a case in law to challenge the Secretary of State’s actions, which they believe have gone beyond his powers by referring the state primary school in Kenley to the
Harris Federation when the school is not a “failing” school and also on issues surrounding the legality of the consultation process.

Roke parents joined forced with parents from other protesting schools yesterday and issued a statement  in which they announced a new campaign organisation 'Parents Against Forced Academisation'. They called for an immediate public enquiry into bullying behaviour and fake consultations endemic in forced academisation of schools.

Yesterday evening, Roke parents received the first of several what they termed 'sham consultation' meetings run by the preferred academy sponsor the Harris Federation at the school. Parents received no representation from any other party and Lord Nash has already declared the decision irreversible.


After we announced our plans for legal action on our facebook group and the Save Roke website, and after the DfE received had complaints from Roke parents about the legality of the consultation process and the fact that parents had not even been asked if they wanted to become an academy on the official consultation questionnaire, the DfE and Harris last night moved pre-emptively, and issued a new consultation questionnaire with the question added. This suggests that the initial consultation document was not indeed not legal, and that we had got them flustered enough to move very quickly to close this legal loophole. This demonstrates that legal process has not been followed with due diligence by the DfE or Harris.