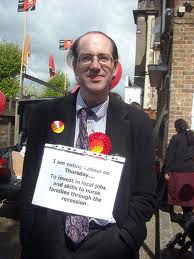 Last Thursday I spoke on behalf of Brent Fightback at Kensal Green Labour ward meeting. There were 11 or 12 people there, including all 3 ward councillors, and the response was very positive. This was not an anti Labour rant but I presented a few issues where I thought the council was lacking and Labour members could be exerting pressure.

These were namely  1) the closure of Central Middlesex A&E where I said that Labour should take a strong stand within the Health Committee and refer the decision up to the Secretary of State, and 2) the response to housing/benefit changes where I said the council should look at reclassifying homes to avoid the bedroom tax (as Knowsley Housing Authority has) and also adopt a policy of no evictions in the way that Dundee council has. (I did also mention a needs budget but its didn't get taken up in the discussion afterwards).

People were very receptive and interested to hear that there was far more that the council could be doing to fight the cuts. Many of them had not considered or even heard about some of the possibilities such as reclassification of homes.

Throughout the meeting I emphasised that that Brent Fightback saw its role within the broad Labour movement and wanted a dialogue with Labour members and councillors about how best to resist cuts.

Despite not raising a word of disagreement at the time, Councillor James Powney is now attacking Brent Fightback on his blog as the "loony left alternative" whose "main activity consists of attacking people in the Labour Party". This strikes me as more than a little dishonest and perhaps an indication of how isolated he is from ordinary members within his own party.

Join in the discussion HERE
Posted by Martin Francis at 08:26:00

Loony Left?
Oh Yeah?
I think all of you are Crazy
I mean any government That will give it's consent to a sale of Cigarettes to the public who then start dying again and again from smoking related diseases and those with damaged health from smoking that need the help of the NHS cause the NHS budget to increase more and more and all this is allowed to continue despite the fact that the country is in debt.
you would think that any sensible government would ban smoking which would then save money having to spent treating people with health problems caused from smoking.
but you see this is where the profit before principle comes into focus...the government are raking it in from the sale of cigarettes and so to ban smoking for them is unthinkable...so instead they come up with the pathetic insulting line which goes...the government believe that people have the right to smoke...but any sensible person would ask what benefit is there to be gained from smoking?
none at all...all it does is damage health and cause serious health problems and eventually death.
it is the tobacco business and the so called government that get the benefits...the one thing they love the most which is money...because with it they can drive around in their big flash cars while wearing their expensive flash suits and go home to their big flash houses and take holidays abroad etc etc etc etc all the things poor people can only waste time dreaming about.
a wise man once said that money in the eyes of a rich man is like a protective wall...in his imagination.
so don't waste your time wanting to be like them...They make me sick with their Loony left nonsense...all of you are Loons.
Look what you have all done to the country!
you have to be Crazy to do what you have done and continue to do.
but instead all you's do is keep insulting and putting each other down while desperately trying to win public support.
you all make me sick.
I can't stand any of you's.
The country would be so much better off without any reckless greed driven ignorant wicked corrupt so called members of parliament.

Over my time in Fightback it has been attended by many people in 'no political party' but involved in campaigns to save services from cuts and privatisation, as well as people in the Labour, Lib Dem, Socialist Workers Party, Socialist Party and the Green Party (and even one ex-member of Brent Conservative Party) who despite belonging to different parties and none share a common opposition to the current Government's and the current Council's policy of cuts.

I don't doubt what you say Martin but I tend to believe what a certain Jeremiah wrote in the bible a long time ago in which he acknowledged that it's not for man ( mankind on whole) who is walking even to direct his own steps.
in all the time that has passed since the challenge to god's sovereignty in the garden of Eden by the rebellious angel now known as Satan
who convinced The first woman Eve that she could Beat out her own path in life without guidance from her creator, just about every government has been formed by humans and I think it is safe to say that all have failed.
modern humans have decided that democracy is the way forward but what has time shown?
when you have people wanting to do their own thing you get disharmony and wars and time has shown that they don't bring about peace security and harmony.
the key to relative peace security and harmony is when all acknowledge just as Eve and Adam were unable to go their own way without God the same applies us today.
now you may say we have god.
but do we?
the two greatest commandments according to god's son Jesus is that we love god and each other.
now look at what we do to each other while deluding ourselves to be a christian nation.
We regularly go to war against other Nations...yet if we are a Christian nation why aren't we showing through what we do that we really are Christians?
Look how successive governments have allowed us to manipulate and exploit each other in the name of economics.
has the putting of profit before principle been a good idea?
the fact is if governments saw benefits in pushing principles ahead of profit they would find that peace and security would be growing
but instead the opposite of peace and insecurity has grown and I doubt they will ever be able to cut it down because the reality is they (we) have reaped what we have sown.
I'm telling you Martin Truthfully David Cameron is not fit to run this country.
take this example...when Jesus was tested by Satan in the wilderness , he resisted all attempts to break his integrity to god...and by doing that he proved that it is possible for a perfect human to keep integrity to their creator.
so Adam and Eve had no excuse for turning their backs on god and following Satan thinking they could forsake god and remain perfect and reap all the blessings.
instead what god told Adam came true in that the day they disobeyed
they would in god's eyes die although that would happen slowly but surely and it it did.
now David Cameron is meant to be a Christian right?
well where is his Christian Christlike Loyalty to God?
calling for gay Marriage is far from an example of Christian loyalty
what it is in fact is gross hypocrisy.
and time has shown again and again that disloyal and unfaithful people tend not to succeed
just because Mr Cameron is prime minister and is a millionaire that doesn't guarantee anything.
however faithfulness to god guarantees peace security and harmony now and in the future.

I am a supporter of Brent Fightback and I am not a member of any political party.

Incidently, Dundee council were the first to commit to a 'no evictions' policy beating Brighton & Hove by a couple of days. Brighton were the first in England though.
http://www.thecourier.co.uk/news/local/dundee/call-for-landlords-to-follow-dundee-city-council-s-bedroom-tax-example-1.77091

That's interesting Trevor, but no members of Brent Fightback are currently MPs, nor to my knowledge, do any of them have any involvement in profiteering from tobacco.

Anon
I Have decided to write again in the hope that I can give you food for thought and everyone else that decides to read.
right...when did you last have a very painful headache Anon?
What did you Use to ease the pain?
The chances are you Took a couple of paracetamol with a glass of water
which is what most people tend to do.
However what would you recommend to be used in order to deal with the many pains people are suffering these days?
many nations resort to fighting wars but time has proved that isn't the solution.
the solution is the application of Christian principles.
Like Everyone Trying our best to learn to love each other and put up with each others faults etc.
But of course sadly that is often easier Said than done but it is possible if we learn to be long suffering towards each other.
But again sadly developing those qualities are far from easy but again it is possible and people in the past and in modern times have proved that it is possible.
and I think it is more than worthwhile trying to follow their example
rather than carrying on in the traditional way which obviously does not work.
also we need a government that will put principle ahead of profit because the government that does that will be the government that succeeds.
because Life isn't about chasing money from the cradle to the grave
it is rather about chasing principles and applying them and when we see that they work we should push them like we push the pursuit of money.
our governments are corrupt...after all look how because of their love of money they allowed the tobacco business to exploit and manipulate us into smoking.
then you had the mp's expenses scandal and in both cases it was the desire for money that lead them to do what they did.
can you understand now why The apostle Paul warned about how the love of money can lead many to ruin?
lastly this is why True Christians are succeeding where the governments are failing...why?
Because True Value Principles More than Money.