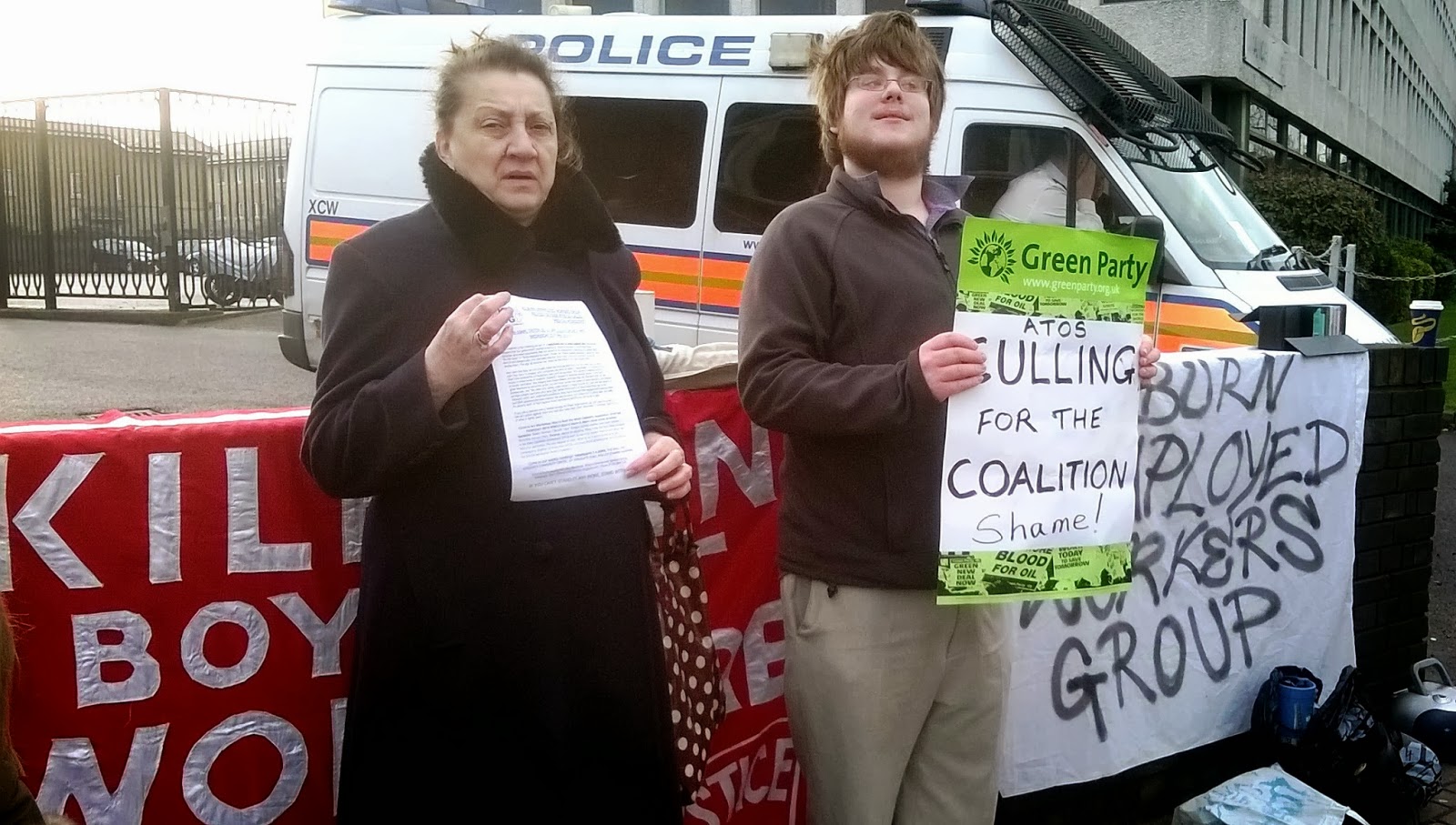 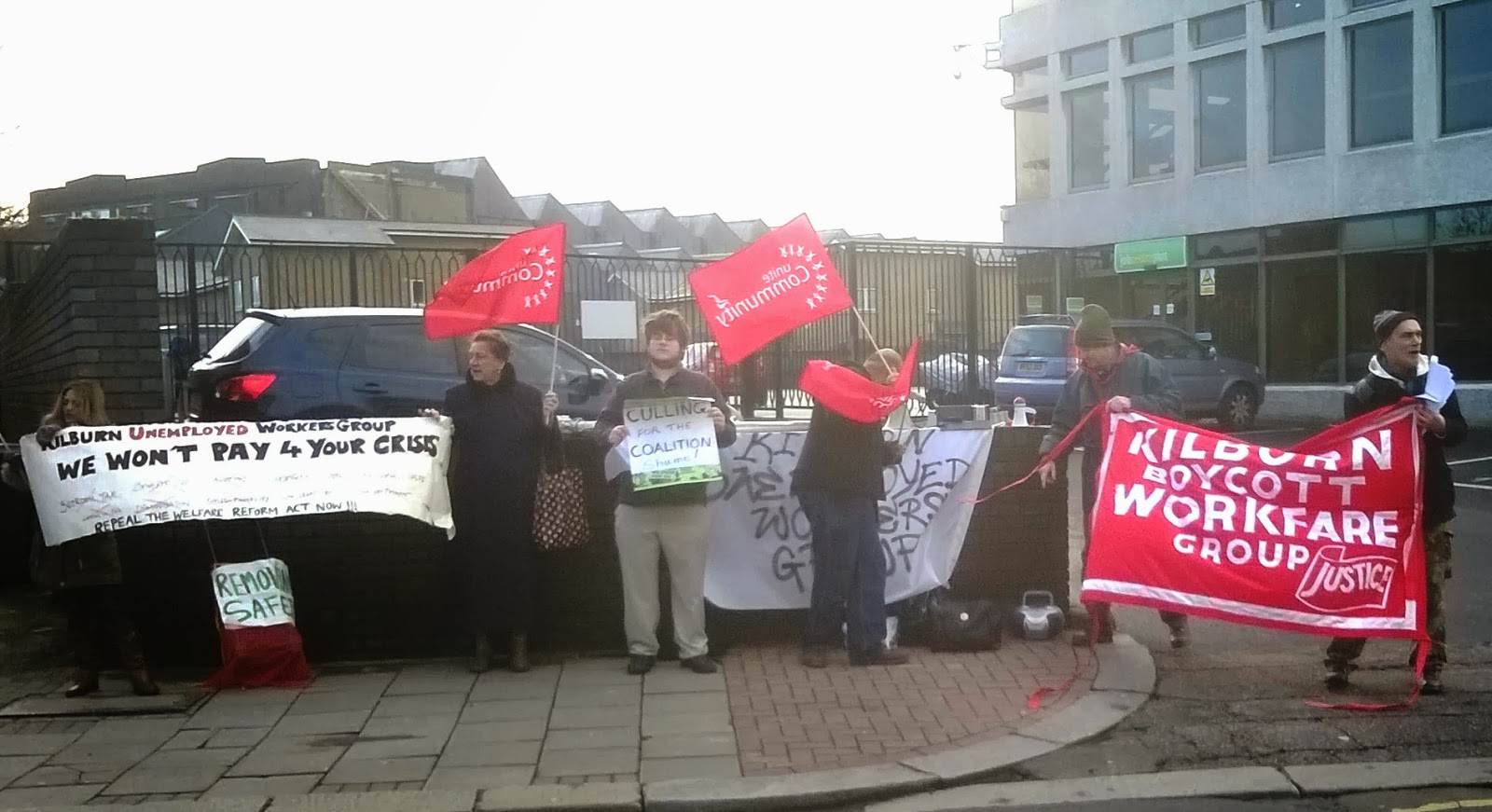 In the 8am chill this morning activists from Brent demonstrated outside the offices of ATOS in Neasden Lane as part of a nationwide protest against the impact of ATOS assessments on disabled and unwell claimants. Individuals came from Kilburn Boycott Workfare, Kilburn Unemployed Workers, Unite the Community, Brent Green Party and Brent Fightback.

Motorists and pedestrians passing by were generally sympathetic and warmed our hearts if not our fingers.

Statement of Intent – We oppose the reported ill-treatment by ATOS of those receiving sickness benefits. We are calling for the abolition of the Work Capability Assessment which is not fit for purpose. We believe that a qualified medical doctor, ideally the GP who regularly sees and treats the sick or disabled individual in question, is the only person able to decide if an individual is fit for work. These peaceful demonstrations will include a minutes silence at 1pm to honour the victims of Iain Duncan Smiths callous reforms.

On February 19th protesters will gather peacefully at the locations used by ATOS to carry out the discredited Work Capability Assessments. Many will provide a live stream which can be viewed on the campaigns webpage http://ukrebellion.com/atosdemo/. The event has attracted a wide range of high profile speakers from politicians to celebrities. The largest demonstration is taking place in the ATOS Head Office, 4 Triton Square, Regent’s Place, London, NW1 3HG London, United Kingdom from 10:00 to 16:00and included the following speakers


ATOS activities in the UK are a further, dreadful, example of the government’s failed outsourcing experiment. They have inflicted misery and fear on millions of people, and this must end. The medical professionals who treat them are the people who should decide on individuals’ capacity to work. We shouldn’t be pumping public money into the private profits of this health multinational. And we should remember: behind ATOS is the callous government policy of cutting social security payments to vulnerable people. We must ensure everybody who needs social security payments receives enough for a decent quality of life.

Caroline Lucas Green MP for Brighton was speaking at the demonstration planned in her constituency. She said:


Outsourcing the assessment of sick, disabled and vulnerable people to a private corporation, and especially one with such a disgraceful track record as Atos is disgusting…. Ministers have so far refused to take action to get rid of ATOS and their thoroughly discredited Work Capability Assessments. The day of action on February 19th is a chance to stand strong together against companies like ATOS until they are a thing of the past. I’ll be there and will do what I can to keep the issue alive in Parliament.

ATOS are clearly worried about the impact the demonstrations will have on their already tarnished reputation. One central claim they make is that

“We have no targets in relation to the outcome of benefit claims either at an individual or overall level.”
http://blog.atoshealthcare.com/2014/02/protests-targeted-at-atos-healthcare-assessment-centres-on-19th-february/

This clearly flies in the face of the revelations made by whistle-blower Greg Wood who lifted the lid on the toxic culture in the organisation and the recent report published by the centre for welfare reform “How Norms Become Targets: Investigating the real reason for the misery of ‘fit for work’ assessments” by Kaliya Franklin which demonstrates how targets to find people fit for work regardless of their individual circumstances have taken root in the organisation.
Posted by Martin Francis at 13:37:00

I Think what the so called Coalition Government has done regarding ATOS is typical and To be expected
after all we should all remember that this is a government desperate to save money and so the more they get people currently claiming benefit due to health problems back to work
makes sense.
but it's the way they are going about it that is obviously causing great distress.
you could be forgiven for expecting them to bend over backwards to deal with the tobacco addiction problem in this country but no
they instead take the predictable approach which is to continue allow cigarette companies to exploit the public with their health damaging death dealing products.
because if you think about the government rakes in billions in tax revenue from the sale of cigarettes and therefore it is serving their best interests and so I think it is safe to say that they will continue to protect what is in their interest but come down hard on what isn't
which of course is the benefit system.
also I will say again that when anyone is under the yoke of a government that have done what our government(s) Have regarding Cigarettes you cannot expect them to be caring and sensitive in how they deal with problems.
I personally would not waste my time standing out in the cold waving placards that condemn the coalition because it is obvious that they will not change their ideas and will surely continue making life extremely difficult for those of us struggling to survive on benefits.