In  September 2013, Brent North Labour MP, Barry Gardiner, faced the wrath of demonstrators at Brent
Civic Centre LINK, over his controversial invitation to Narendra Modi, to address the House of Commons. Modi has been accused of collusion in the massacre of Muslims in the Gujarat in 2002 when more than 1,500 died and many were made homeless. Modi was Gujarat Chief Minister at the time and Human Rights Watch found evidence of state complicity in the violence. Modi leader, of the nationalist BJP is tipped to win the forthcoming April election with many fearing that it will herald an era of extreme Hindu nationalism and religious intolerance.

The September  invitation was issued by both Labour Friends of India and Conservative Friends of India.  An unofficial Lab-Con 'Coalition for Modi' exists in Brent North with members of  the 'Queensbury Conservative Action Team' among those campaigning for Modi. The action team are likely to be the Conservative candidates for Queensbury ward in the May local election.

In the Independent today LINK commentator Sunny Hundal describes their activities in an article which gives valuable background on the BJP's links:

British and American Hindus are an important source of support, canvassing and even postal votes for the BJP in India. More recently, they have helped to normalise Modi's reputation after the fallout from 2002. On Sunday afternoon, about 20 Gujaratis gathered at the back of a small restaurant in north-west London to discuss how they could help Modi spread his message. I had been told about it by a friend and decided simply to turn up and observe.

At their regular "Modi Tea Club" events, they raise funds and recruit volunteers. One group member, who is planning to run as a local councillor, applauded the US decision to meet Modi and said British Gujaratis had played an instrumental part. "The pressure we put [on the government] in the UK makes a difference around the world," he says, to applause. Next month, their idol will speak to them and hundreds of other groups around the world via satellite to energise them before the elections 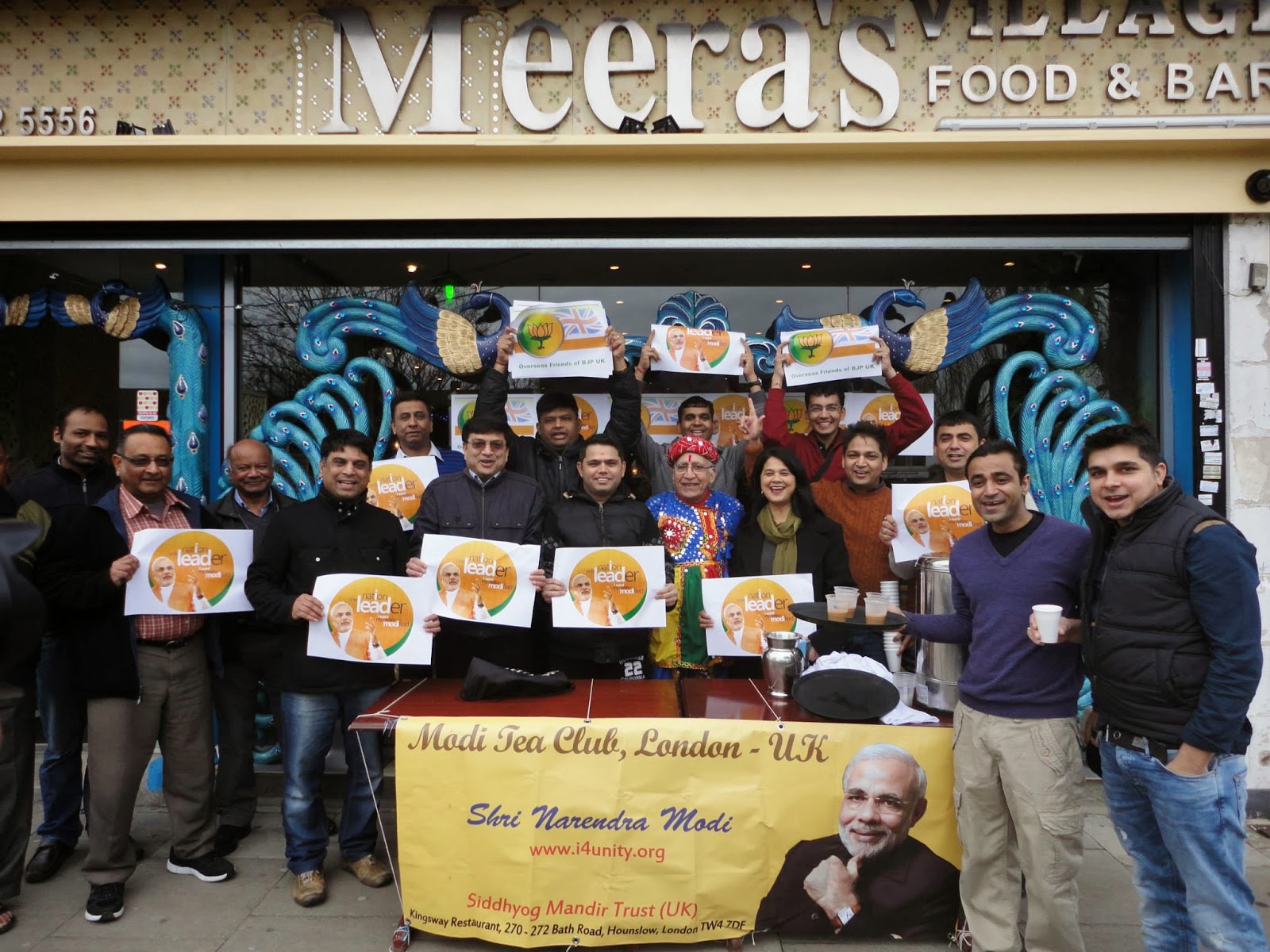 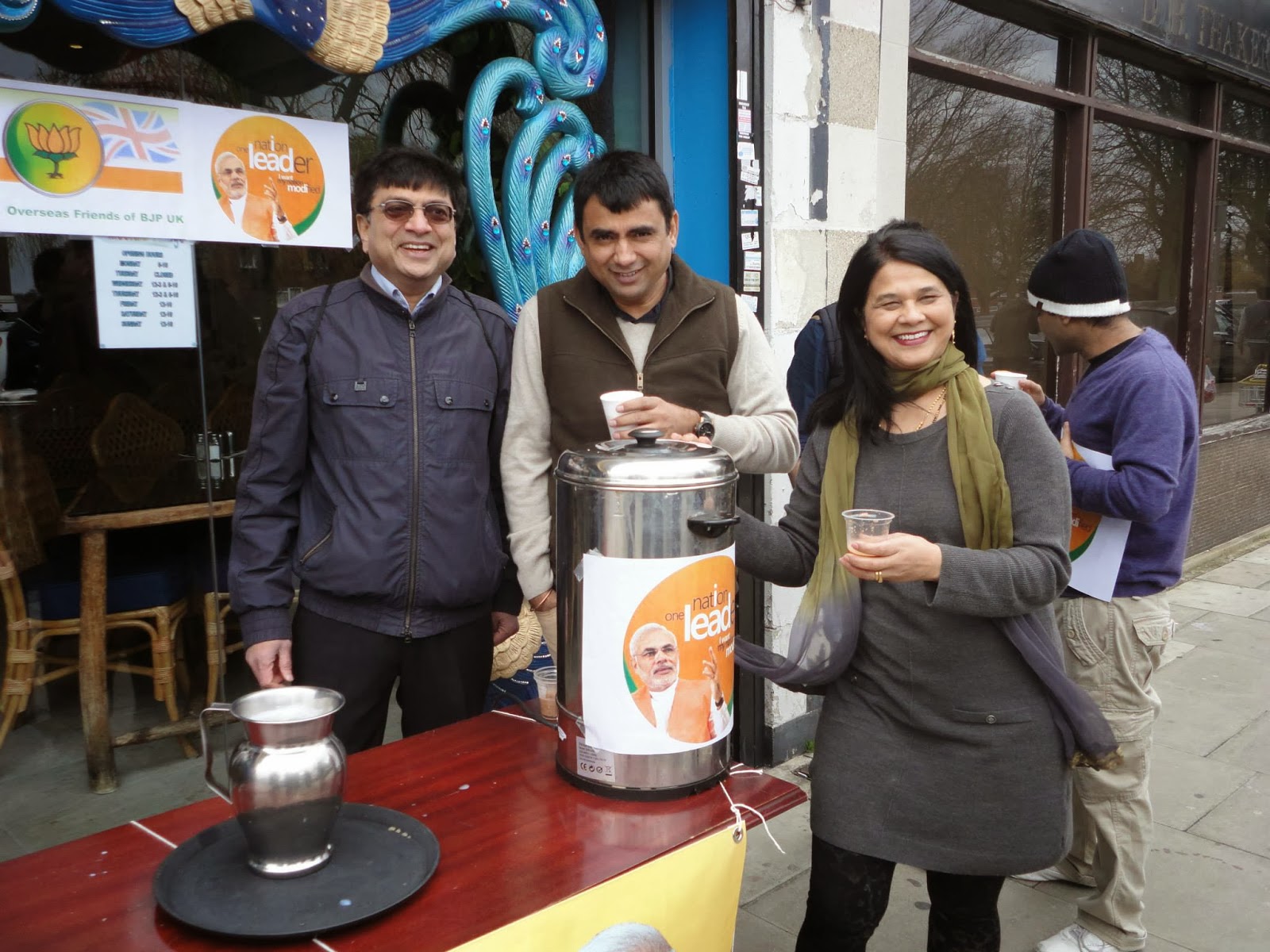 Last night the Monitoring Group and Awaaz organised a parliamentary briefing entitled 'Narendra Modi and the rise of "Hindu Fascism" '. Their publicity read:


The “Parliamentary Briefing & Forum” will discuss the politics of Narendra Modi. Modi is the current Chief Minister of Gujarat and is the Prime Ministerial candidate for the Bharatiya Janata Party (BJP)-led National Democratic Alliance coalition for the upcoming 2014 national elections in India. He is also a member of the Rashtriya Swayamsevak Sangh (RSS), an organisation that is described as Hindu nationalist, supremacist and fascist by scholars, journalists and human rights commentators.  The meeting will examine his role as the Head of the State Government during the Gujarat 2002 communal violence and pillage against the Muslim minority population that led to over 1500 deaths, hundreds of rapes against women and displacement of over 200,000 of people from their homes. The forum will also analyse the claim the Modi represents a model for ‘”good governance”. His supporter’s have worked hard to brand Gujarat as a state of dynamic development and economic growth and prosperity, using the slogan "Vibrant Gujarat". The facts, however, reveal that Gujarat has a relatively poor record when it comes to human development, poverty alleviation, nutrition and education.

It is not clear where the Conservative Party nationally stands on these activities by some of their local candidates, and indeed what the local party thinks about this controversial politician.