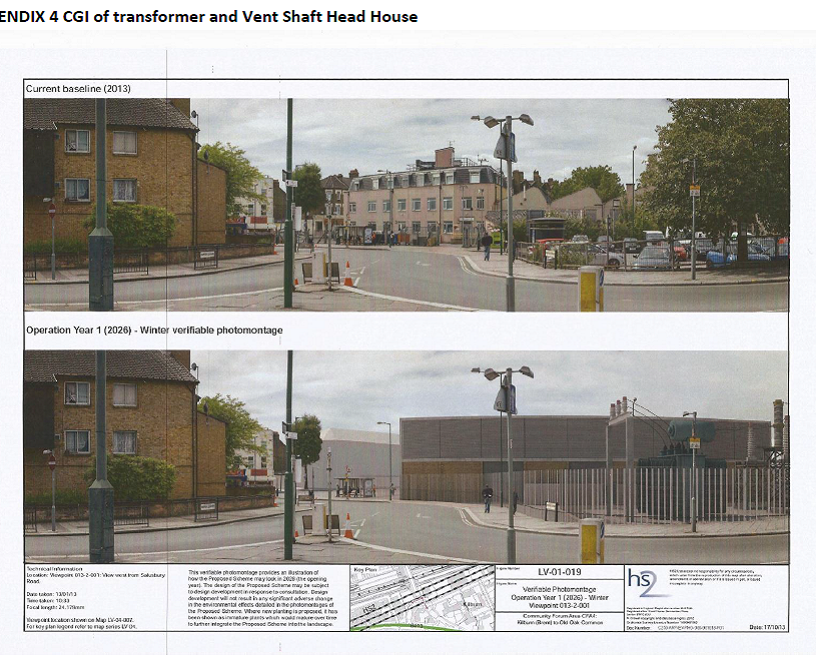 An officers' report going before the Full Council Meeting on March 3rd asks members 'if considered expedient' to resolve to oppose the HS2 Bill  and consider 'the passing of further resolutions..to authorise the deposit of a petition against the Bill in either or both Houses of Parliament'.

The report suggests that location of the proposed ventilation shaft and transformer (see CGI above), next to Queen's Park Station, would have an adverse affect 'not only on that site but also on the Council's regeneration plans for the wider South Kilburn area'.

The report states that there are a number of good reasons to offer broad strategic support for HS2 in terms of improved connectivity and job opportunities in areas such as Old Oak Common, but  identifies three negative impacts on the borough.

1, The Bill seeks powers for the compulsory acquisition of  'all interests' in land in South Kilburn 'which does not appear to be required to implement the proposed new high speed railway line.  The land includes parts of the South Kilburn Estate including St Mary's School, parts of site 11b, Alpha and Gorefield Houses and the new development on Cambridge Road and Chichester Road. It is also proposed that some land will be possessed on a temporary basis and the Council states that it sees no reason why the sites above should be permanently acquired by HS2 and should petition on this basis if discussions with HS2 fail. 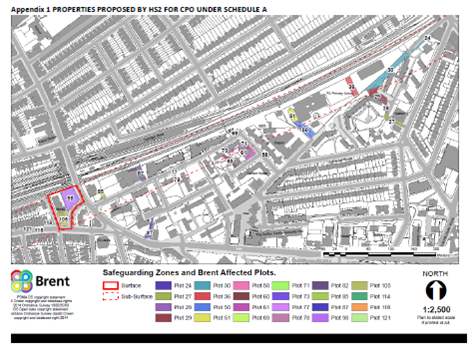 2.  The Council has approved plans for the Queens Park Car Park site (Site 18 in the South Kilburn Regeneration Programme)  which involves demolition of Cullen House, Keniston House, Premier House and the Falcon Pub and the erection of 137 flats (39 of which are affordable), public space, office and commercial shop space.  The HS2 plans for a ventilation shaft and transformer would disrupt these plans with a loss to the Council and also affect the decanting of residents on the South Kilburn Estate during regeneration.

The Council has put forward an alternatiuve plan for the ventilation shaft  to go on the east side of Queen's Park Station but HS2 said although that was technically possible  their preferred site was still the original proposals because of  'changes that would otherwise be required to the alignment of the proposed HS2 tunnel, access issues and a likely increase in temporary impacts during construction on nearby residents and a local school'.

A subsequent  report from Lambert Smith Hampton, commissioned by the Council, concluded that there was a 'clear economic and financial benefit associated with relocating the ventilation shaft and auto transformer from Site 18 to the alternative Canterbury Works site. The Council will challenge the adequacy of the project's  Environment Statement on the basis of:
3. Brent Council  supports the proposals for a new interchange between HS2 and Crossrail at Old Oak Common, including links between the interchange and the West London Line and North London Line. However they also think that additional value could be achieved for a new rail link between Cross Rail an the West Coast Mainline.

The report argues that such a link would enable users of  London Midland Services to transfer onto Crossrail, 'providing improved services straight into central London. It would ease congestion at Euston and  save passenger time. Officers suggest, 'By accommodating the future delivery of this link as part of the HS2 construction plans at Oak Old Common, there would be an opportunity for trains to run to Wembley with a direct link on to Heathrow and services to the West of England.'.

Officers recommend  that the Council considers supporting any petition by TfL for the delivery of enabling works at Old Oak Common to allow for this link. 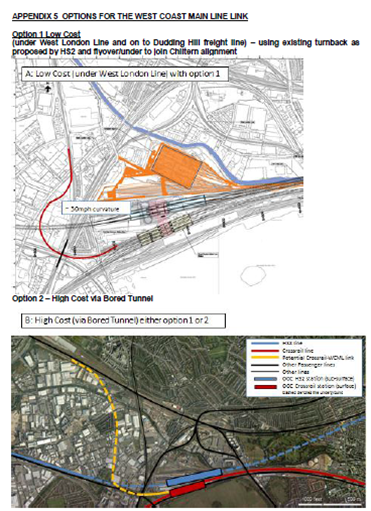 The report discusses the uncertainties over the amount of compensation the Council might receive from compulsory purchase but goes on to state,  'It is clear that several millions of value are at risk from the HS2 proposals as they currently stand.'

The report sets out the estimated costs of Petitioning the HS2 Bill:

The report recommends the first two only.

Where to start. Camden Council has been opposing HS2 for several years, so Brent is very late to the game. Some of us have been asking for several years what the effect of HS2 will be on South Kilburn and not got answers. Now they can't even be bothered to tell us about this report, even those directly affected by it. That's directly affected as in the report mentions that HS2 may want to acquire our blocks of flats!
Further - Queens Park station and the land next to it is not in South Kilburn. Its not even in the Kilburn ward, but Queens Park, though it is true that Brent being able to build there would affect their ability to decant from elsewhere in South Kilburn. But then if so much of the new housing being built wasn't for sale or market rents, there wouldn't be that need either!
When they argue for the HS2 ventilation shaft to be build in Canterbury Road rather than next to Queens Park station, they make no mention of the effect this might have on the area surrounding the Canterbury Road site. Yet not only is this next to the blocks which HS2 `might' acquire, it is also in an area where there have been constant complaints by residents of the effect of living in the middle of a building site for several years. That's okay, just encourage another major building development on top of what is already happening.
The report is far more concerned about the financial implications for the Council than the implications for the human beings living in the concerned area. Otherwise they might have bothered to consult with us - or at the very least tell us that the report existed.

Mmm. I wonder what a bunch of Киiвлянинs would do if they tried to demolish their flats to build a ventilation shaft in their endz in downtown Kiev.

The visualisation of the surface building for the shaft can be modified a great deal.

It seems unlikely that the HS2-HS1 link will be needed at Camden Lock and through Camden Road station. That presumably means that only two, rather than three tunnels will be built between Old Oak Common and Camden, and if so, the shaft requirement goes down by one-third. Any future HS2-HS1 link might need two extra tunnels, and go a completely different way.

Both those images by Brent are useless. The first route would be far too slow for a serious Crossrail service, and would include using a slow series of bridges under the main line, just south of the North Circular.

The second one shows a tunnel, but is too curvy to be give reasonable speeds. A longer tunnel, under the North Circular seems far more likely, although obviously more expensive. Between Wembley Central and Old Oak Common, some trains could stop at North Acton Central Line station, then. It might even be possible to design in a future opening up of the tunnel and adding a station, in a cutting, in the middle of Park Royal.

Residents addressing a council meeting on an issue that affects them? What a ludicrous idea!

I am unsure as to whether London Borough of Brent (LBB) have complied with section 239 of the Local Government Act 1972. The act clearly states that the purpose of the meeting must be advertised, the advertisement placed in the Kilburn Times 13/02/2014 only refers to lodging a petition against the bill when the prime purpose of the meeting as demonstrated by the minutes of the Full Council meeting of 03/03/2014 was to lodge a Petition to transfer the location of the ventilation shaft from that of the Salusbury Road site (site 18) to that of the Canterbury Works site. LLB have failed in there statutory obligation under the act to give accurate details of the proposed meeting, In addition to the above under the petition lodged by LBB petition number 495 para 87 concerns are raised of the effect of noise and the Electro-Magnetic interference effecting health, this is a concern for LBB if the ventilation shaft is sited at Salusbury Road but does not appear to be any concern if the ventilation shaft is sited next to St Mary's Primary school, double standards to say the very least