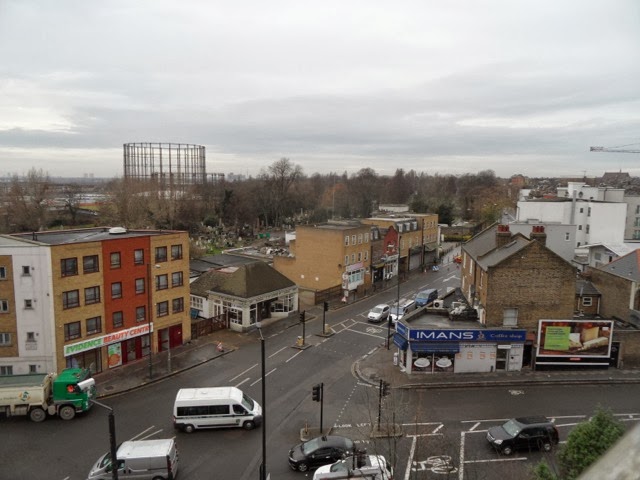 Guest blog by Jay of Kensal Triangle Residents' Association about a long persistent campaign that now looks as if it will yield results.


Positive movement on the Harow Road/Ladbroke Grove Junction!  A solution may well be in sight.
On Friday 7th February representatives from Transport for London, Westminster, Kensington and Chelsea and Brent councils, West One ( the infrastructure management company employed by Westminster Council to manage its traffic planning) and Kensal Triangle Residents Association joined in a meeting kindly organised  and hosted by Fr David Ackerman for a meeting at St John's Vicarage to discuss the Harrow Road /Ladbroke Grove crossing.

This brought together professionals and locals to address the need for immediate action. The campaign for the provision of safe pedestrian crossing facility has been going for nearly eight years now, and the meeting was arranged to give updates on plans formulated by West One as a result of the last round of surveys.
The meeting proved to be positive on all counts.  It was agreed by all that the attempt to improve the situation by providing wider refuges in the middle of each arm of the junction had not worked at all. West One, in conjunction with TfL are now recommending to all parties that a system be installed with a phase where all vehicle traffic is stopped at the junction to allow a pedestrian crossing phase with the traditional ‘green man’light.  This will allow pedestrians enough time to cross any one arm of the junction.  (it was not proposed to encourage crossing diagonally over the junction as is the case at Oxford Circus)

There will also be consideration of lane confusion, signage and the hold-ups on Kilburn Lane.

West One needs to consult with the two other councils to ensure that this solution us agreed by all parties, and further modelling needs to be done to ensure that congestion will not be increased by the new scheme, but the overall message was that positive and effective action is being taken  to make the junction safer for pedestrians and drivers.

West One could not give a precise timetable for implementation for the plan, but hoped to finish the modelling by the end of March, and installation of the new lights by the end of 2014

The meeting was also notable for its focus on a solution, and Fr David was glad to host a meeting that brought together the most important people who can affect change.  It was extremely helpful and positive to have a meeting so close to the junction concerned, where everyone could see the scale of the problem.

The Background to a Long Campaign

KTRA have been campaigning to get ‘green man’ lights at this junction for 8 years.

It took a long time to find out which Borough took responsibility for the junction as it is on the boundary of three boroughs.  Westminster is the lead borough, as it has the south east and north east corners.  R B K and C has the south west corner and Brent the North West.  This is one of the difficulties, as funding is complicated due to shared responsibility between the three boroughs.

Further, as it is a main road, Transport for London is involved, and has to survey the junction to determine what difference a change in phasing would make.  This also has implications on funding any changes.

Almost everyone who lives in the area agrees that the junction is dangerous. It is particularly hazardous for anyone with impaired mobility or eyesight, and it is a nightmare for parents with children, or teachers with school groups trying to cross. It is a huge barrier in the way of any attempts to get more children walking to school

Over the years we have delivered a petition of over 1000 signatures (the previous incumbent at the church collected some of them from the congregation) two long scrolls of wallpaper covered with drawings and comments, many form children, asking for the junction to be made safe, and attended two meetings at Portcullis House arranged by Glenda Jackson with representatives from all t he boroughs to try and find a way forward.  Martin Low from Westminster Council has said in one of these meetings that he is not averse to the idea of a pedestrian phase at the lights, but it depends on TfL and price.

Our position is
1).  Even though there have not been any fatalities or major injuries the junction is dangerous.  There are people who get the bus one stop to Sainsbury’s rather than cross the road there.  There is no time when it is safe for pedestrians to cross any arm of the junction

2) It can only get worse. The junction is used by several different groups of school children as well as  anyone getting off the number 18 to get a bus going down Ladbroke Grove.  In the morning and evening rush hours it is particularly bad.  As the area is developed more and more there will be more pressure on the junction – especially as Sainsbury’s remains the only large supermarket in the area.

3) Widening the refuges in the centre of each arm has not made a difference - most of them did not last a week.  They did not tackle the central problem; that it is unsafe to cross the road.

Every Junction on Chamberlaine Road from Kensal Rise Station down to the Harrow Road has a pedestrian phase.

There are no traffic lights  on Ladbroke Grove until you get to Ladbroke Grove Station, where there is a separate pedestrian crossing controlled by lights.  It is obviously generally accepted that on all of these roads pedestrian safety needs to be ensured by the provision of light controlled crossings.

5) We consider that putting a pedestrian phase into the Crossing will not cause more traffic queues.
Coming down Chaimberlaine Road from Kensal Rise the traffic is held up by the lights at Harvist Road and Bannister Road: it is more often than not fairly clear after both of these junctions until cars reach the bend by Ilbert Street: congestion is caused there by the narrowness of the road and parked cars at any time of day or night.  Crossing the Harrow Road is relatively straightforward, except for right turning vehicles.

Coming up Ladbroke Grove, congestion is caused by the two roundabouts at Barlby road and the entrance to Sainsbury’s.  This can cause tailbacks to Ladbroke Grove Station.  Once over the roundabout at Sainsbury’s cars move freely to join a short queue at the Harrow Road lights

There is congestion all along the Harrow Road from Harlesden: it can take seven minutes to get from the Scrubs Lane Junction to the lights at Kensal Green Station.  There is then usually some clear road before the tailback at the Ladbroke Grove Junction.  This tailback is caused by the poor layout of the junction and the bus lane.  The road essentially becomes single lane, with space for only four or five cars to pull into the left hand lane at the junction in front of the number 18 bus stop. Consequently, most of the cars wishing to continue east along the Harrow Road are stuck behind cars attempting to turn right into Ladbroke Grove – and only about four of these make it across the junction in any given phase of the lights.  Moving the bus stop back a few yard would help – it is still set up for the now defunct bendy buses,  and does not need to be anything like as long as it is.

There is much less problem for traffic coming out of Central London on the Harrow Road: there are two lanes and a left filter lane at eh junction, and although it is still nerve-racking for vehicles turning right up Kilburn Lane, cars going straight on or turning left are not impeded.

A light system with a pedestrian phase, and with right turn filters on the traffic phases would be of benefit to pedestrians and drivers alike

Such great news! Well done to all those involved in pushing this forward.

thanks! Fingers crossed that it really happens. More news as we get it....

Good Work! Many thanks. I was told by workmen a few years ago that the wiring for pedestrian crossings already exists here. Not installed because councils (at that time) could not agree.

Approaching the junction from Kilburn Lane, it would be much better if the right hand land was right turn only and the left hand for left and ahead. At the moment, drivers speed ahead from both lanes and get very angry when they find there is only one lane to move into on Ladbroke Grove, partly because the entrance is narrow anyway and partly because the (much needed) bicycle lane is to the side. I recently saw a car narrowly miss knocking down a cyclist because they did not want to give way to the car running along side.