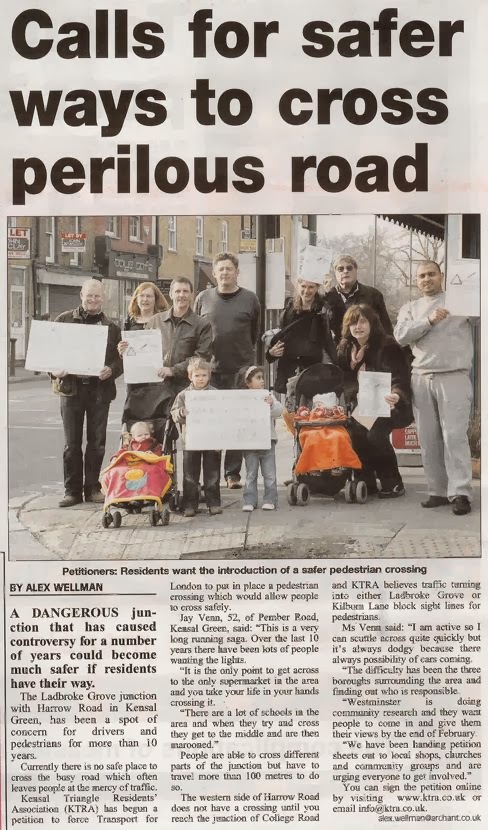 Guest blog from Kensal Triangle Residents' Association who appear closer to a solution that they began to campaign about in February 2008. (pic from Kilburn Times above) Six years on a solution may be in sight.
.

On Friday 7th February representatives from Transport for London, Westminster, Kensington and Chelsea and Brent councils, West One ( the infrastructure management company employed by Westminster Council to manage its traffic planning) and Kensal Triangle Residents Association joined in a meeting kindly organised  and hosted by Fr David Ackerman for a meeting at St John's Vicarage to discuss the Harrow Road /Ladbroke Grove crossing.

This brought together professionals and locals to address the need for immediate action. The campaign for the provision of safe pedestrian crossing facility has been going for nearly eight years now, and the meeting was arranged to give updates on plans formulated by West One as a result of the last round of surveys.

The meeting proved to be positive on all counts.  It was agreed by all that the attempt to improve the situation by providing wider refuges in the middle of each arm of the junction had not worked at all. West One, in conjunction with TfL are now recommending to all parties that a system be installed with a phase where all vehicle traffic is stopped at the junction to allow a pedestrian crossing phase with the traditional ‘green man’light – an All Red Phase.  This will allow pedestrians enough time to cross any one arm of the junction.  (it was not proposed to encourage crossing diagonally over the junction as is the case at Oxford Circus)

There will also be consideration of lane confusion, signage and the hold-ups on Kilburn Lane.
West One needs to consult with the two other councils to ensure that this solution us agreed by all parties, and further modelling needs to be done to ensure that congestion will not be increased by the new scheme, but the overall message was that positive and effective action is being taken  to make the junction safer for pedestrians and drivers.

West One could not give a precise timetable for implementation for the plan, but hoped to finish the modelling by the end of March, and installation of the new lights by the end of 2014.

The meeting was also notable for its focus on a solution, and Fr David was glad to host a meeting that brought together the most important people who can affect change.  It was extremely helpful and positive to have a meeting so close to the junction concerned, where everyone could see the scale of the problem.