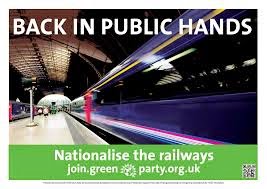 A letter from 30 Labour PPCs to the Observer has been prominently featured today and has earnt top billing on the BBC news and current affairs programmes this morning. The letter calls on Ed Miliband to make public ownership of the railways a key part of Labour policy going into the general election.


After many years of being in government, sitting and watching the privatised rail monopolies rake in huge profits, are Labour about to do something? Or at least "consider" doing something?


The Labour Party might finally be starting to catch up with the Green Party, on this key issue


The truth is that the British public have been down this road before with the Labour party and they have been let down time and again. You simply can't trust Labour to do what they say they are going to do."


Caroline Lucas MP has a bill in the House of Commons right now calling for exactly this. Labour had more than a decade in government to do something about this and they didn't lift a finger to help.


This is a flagship Green Party policy; Caroline Lucas has made it central to her agenda; the media really ought to report that Labour is hardly engaging in original thinking: simply stumbling falteringly toward something that voters can already plump for in unadulterated form by voting Green.

The letter from the Labour PPCs come as another poll shows the Greens overtaking the Liberal Democrats in the European Elections. The Green Party is on course to return its highest ever number of MEPs on May 22nd.
Posted by Martin Francis at 18:14:00

Below is the full text of today's Observer letter. Interesting to see that it's headed up by Nancy Platts, Labour's PPC for Brighton Kemptown and Peacehaven. Seems she's not abreast of the hard work of Brighton Pavilion's MP Caroline Lucas on this issue. I invite Ms Platts and her fellow PPCs to state publicly that they'll actively encourage Ed Miliband and Mary Creagh, Labour's Transport Minister, to support Ms Lucas on this issue. For the record: I am not a member of the Green - or any other political - Party:

Rail fares in Britain are contributing to the cost-of-living crisis, with season tickets now the largest monthly expense for many people, costing even more than the mortgage or rent ("Cautious or bold: which path will Miliband take to election?", News).

Train companies walk away with hundreds of millions of pounds every year, despite running monopoly services and benefiting from £4bn of public investment in the rail network every year. These profits are even helping keep down rail fares on the continent as many of Britain's rail services are run by subsidiaries of the state railways of France, Germany and the Netherlands.

Yet the not-for-private-profit model that works so well on the East Coast line has shown how there is a better way to run Britain's rail services. As well as making over £1bn of franchise payments to government, East Coast reinvests all of its further profit to benefit passengers.

A commitment to extend this successful model to the rest of the rail network, as existing contracts come to an end, would mean that hundreds of millions currently lost in private profit would be available to fully fund a bold offer on rail fares.