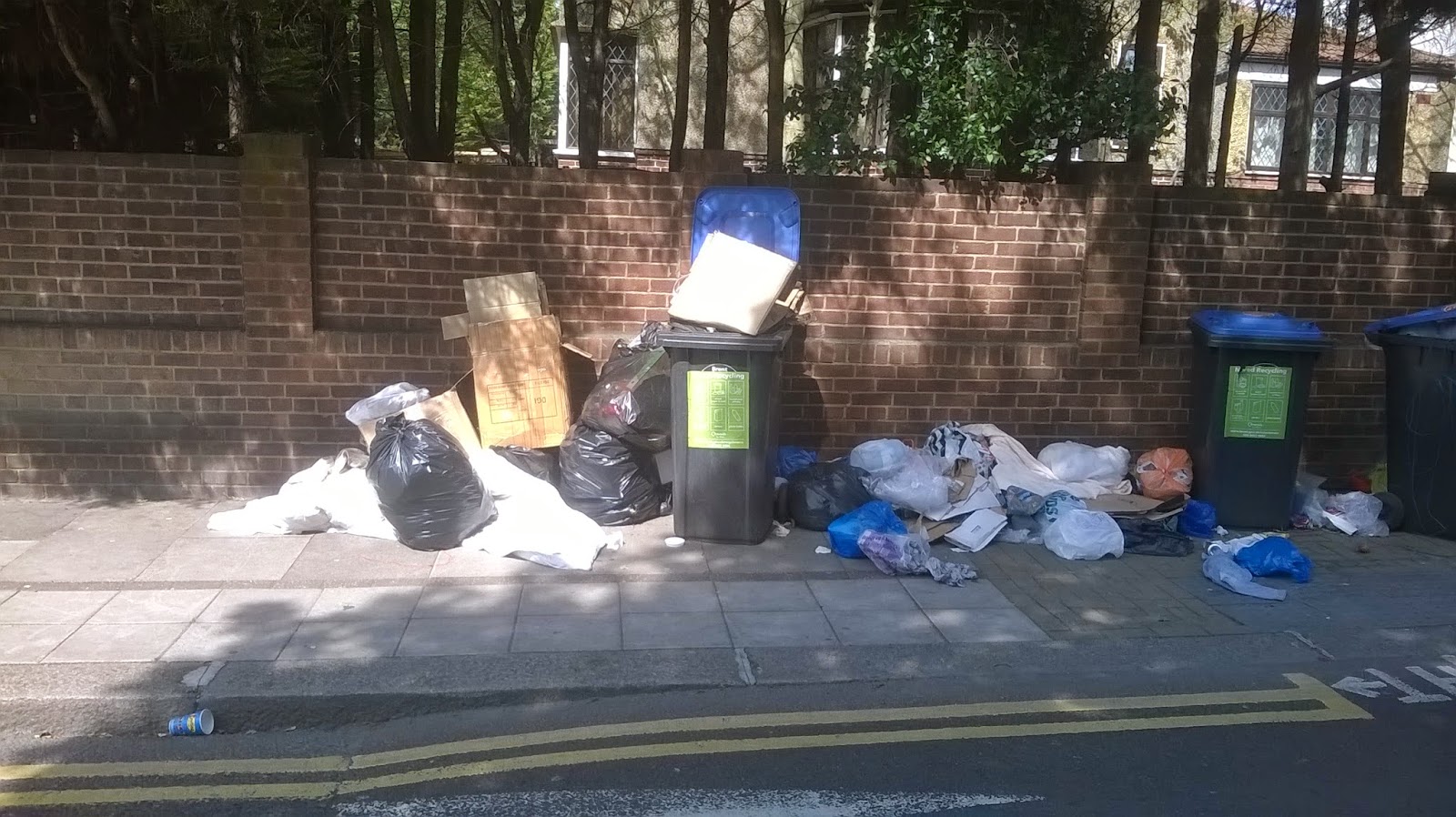 At a hustings in Mapesbury earlier this week a Liberal Democrat candidate said that the local election was about efficient emptying of bins and clean streets and not about 'political grand themes'. This was a swipe at my fellow Green Shahrar Ali, whose speech had identified the democratic deficit on Brent Council and the iniquity of privatisation and the bedroom tax.

The Lib Dem candidate was right in a way:  no one is going to say they are FOR fly-tipping, overflowing bins, litter strewn streets or pavements smeared with dog excrement. However the allocation of resources to deal with those issues is a political issue - both within the Council and in terms of government resources allocated to local authorities. The extent to which services are out-sourced and the wages and working conditions of sub-contractors are a political issues. The Council's stand on the privatisation of schools and whether it makes a principled stand on the undemocratic process of forced academisation is a political issue.

It is also important to consider how these decisions are made by councillors and that brings into consideration whether decisions are arrived at through debate and rigorous scrutiny or are mere rubber stamping of officer reports. Opposition and Labour backbenchers find they are excluded from this decision making and instead have to focus on the 'parking, potholes and poo' casework. How good they are at that is not a matter of political affiliation but of personal efficiency. An added, but reduced concession, is their role in allocating ward working money.

In my view this is not a matter for personal attacks, although the current issue has become highly personal because of the huge impact it has made on people's lives and livelihoods, but of questioning why some of the most senior officer positions in the council are in effect out-sourced to people who have set themselves up as self-employed consultants.

This means that at its very core the Council has acquiesced in the Coalition's privatisation agenda - handing public money over to private companies.

A further dimension is the issue, discussed on this blog many times, of the relationship between the Council and developers, or more specifically the relationshing between the Major Projects, Regeneration and Planning Department and developers. With the Council seeing its role as smoothing the way for developers, local residents find themselves locked out of the discussion and the decisions. They become mere irritants in the joint projects of the council and its favoured property developers. Behind this is the political issue of reduced funding for local government and therefore the need for the Council to find other sources of revenue through increasing its council tax base through high density, often unaffordable, housing developments; Community Infrastructure Levy and the New Homes Bonus LINK

Of course it suits the Lib Dems to focus on street level issues and to be photographed pointing at fly-tips, because it takes attention away from their role as Coalition partners in undermining the financial stability and the viability of local authorities.

Bring back Democracy on 22 May.

We need representatives who challenge and question senior management decisions. Not to undermine their authority, but simply as a Check and Balance.

We might as well forget about Voting if Brent Council simply becomes a Corporatized organization with very little ability for questioning decisions.

MAKE YOUR VOTE COUNT ON 22 MAY

For Local Democracy this will decide the future of Local Administration.

There is no one to vote for. I'll only be using one of my three votes and voting Green next week.