From Brent Stop the War 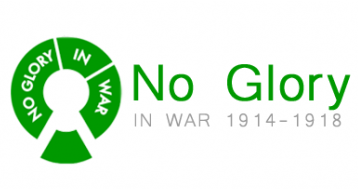 The Government is trying to rehabilitate WW1 as a noble war fought for a just cause and to use the centenary as a celebration of Britishness. Michael Gove tried to introduce a new history curriculum modelled seemingly on Billy Bunter’s at Greyfriars School and has criticised Blackadder, Oh What a Lovely War! and Horrible Histories for detracting from the glorious sacrifice of those who died. Defend School History is a campaign that was set up to counter Gove’s proposals for the History Curriculum and has succeeded in forcing considerable changes.

One of the Government’s schemes to celebrate the glories of the war is to lay paving stones commemorating every soldier who was awarded a Victoria Cross. This is something that the VCs themselves would have opposed strongly. The first of these ceremonies will be in Willesden Green in August. The No Glory Campaign aims to use art and performances to counter the myth of the Glorious war. Their artists group is looking for ways to shift the emphasis from individual “heroes” to the many whom were killed or maimed in the conflict.

There will be speakers from these two campaigns at our meeting. Camden Stop the War and teachers from Brent and Camden are cordially invited.

To commemorate the centenary of the First World War is not necessarily to glorify war. I do not know what the government's agenda is with paving stones to remember VC winners, but I see the laying of one of these in Willesden Green as an opportunity to draw attention to the stories of real people who were involved in many ways in that horrible conflict 100 years ago.

I am an amateur local historian, and one of the illustrated articles I have contributed to the local history resources collection at Brent Archives is about the ordinary women who played their part in the war effort locally between 1914 and 1919:
http://www.brent.gov.uk/media/387425/Brents%20WW1%20women%20workers.pdf

Another article (not, illustrated but well researched and very informative) in the same collection is about how Belgian refugees were helped locally during the war:
http://www.brent.gov.uk/media/387429/Our%20Belgian%20Guests%20-%20Refugees%20in%20Brent%201914-1919.pdf

This second article is by Malcolm Barres-Baker, who is an expert on the First World War period in Brent, and would have played a key part in the borough's commemoration of it, if he had not been unfairly made redundant from Brent Archives by our Head of Libraries, Arts and Heritage in January 2014. One of his ideas was for weekly or monthly pdf's, available to schools, museum and archives visitors and anyone else who is interested, over the next four years of cuttings from local newspapers of 100 years ago showing how the war affected every part of the lives of local people.

I agree with your first sentence but the approach of Michael Gove, calling for celebratory street parties etc, has caused considerable disquiet and this coupled with his views on history in general has caused controversy: http://www.independent.co.uk/news/people/news/a-charlatan-who-scores-cheap-political-points-jeremy-paxman-reopens-war-of-words-with-michael-gove-over-the-world-war-one-centenary-9190705.html