THE ALTERNATIVE: Vote Green in Brent and European Elections Today 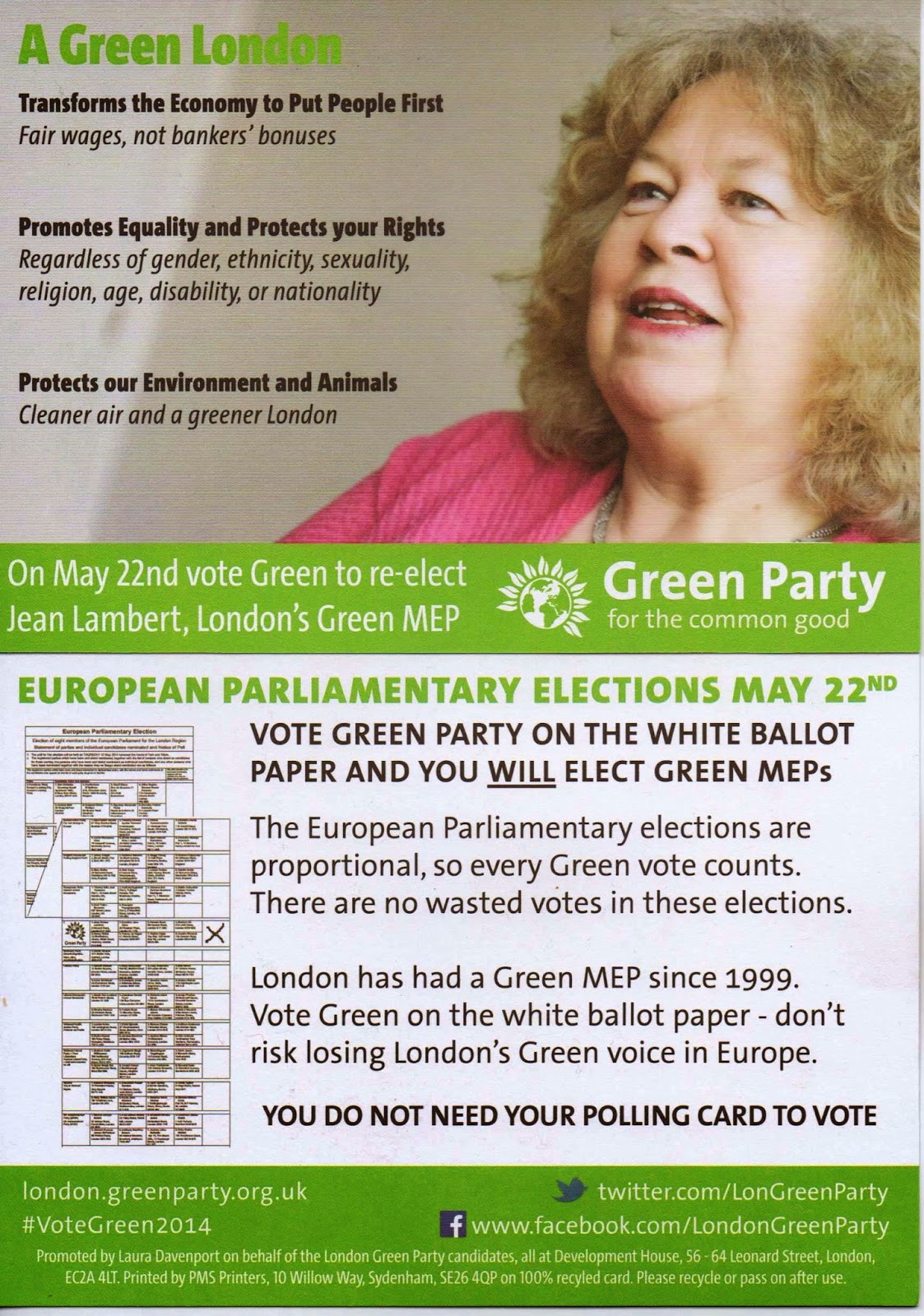 In Brent Labour wants you to forget about the closure of half the borough's libraries, the cuts in street cleaning, the failure to secure affordable housing in new developments, the summonsing of thousand of needy residents for non-payment of council taxes, their failure to support Gladstone Park Primary School and Copland Community School against forced academisation - and much else.

Lib Dems locally shrug off any responsibility for the Coalition cuts in local authority funding that have deprived Brent of cash and, with a few honourable exceptions, have failed to mount an effective opposition to the Labour adminstration. The Conservatives locally are confused and barely exist on the ground.


It is time to get fresh voices and fresh approaches on Brent Council. This is what the Greens stand for:


Safeguarding local services Brent has already lost millions in funding under the Coalition. The 2015-2016 Brent budget is likely to require cuts that will cause untold damage to the local population. The Green Party is anti-austerity and pro-social justice and so opposed to the Coalition’s attack on the poor and vulnerable. We will oppose any such cuts.


Accountability and Transparency  Many residents have experienced being ignored, bulldozed or mislead by Brent Council. We will make sure the Council is accountable for its  actions and transparent in its dealings with the public. We’ve signed up to Keep Willesden Green’s pledge to submit ourselves, if elected, to recall by 51% of the votes cast in a ward at this election.


Climate Change Greens are working at a national and international level to combat climate change. We will also press for local action including, encouragement of green jobs through a Brent Green Industries zone with start-up subsidies, a programme of energy  efficiency in council and BHP properties including double glazing, insulation and solar panels and a pilot Low Carbon Zone.
Clean Air Air pollution is not just an irritant, but an unseen killer, strongly linked to asthma, lung cancer and cardiovascular illness. Over 4000 Londoners die early each year as a result of it. We will work with Green Assembly members for action at the London level to tackle high polluting vehicles and reduce dependency on cars. Locally we support the London Cycling Campaign’s ‘Space for Cycling’ initiative, will press for better public transport to reduce car use, especially the ‘school run’, and encourage a diversity of shops in our local high streets to encourage ‘walkable’ local shopping.

Housing We will support local developments on viable brown field sites that include at least 50%         genuinely affordable housing and that are accompanied by infrastructure improvements including health and education facilities to support the additional population. We will press for the urgent  delivery of the delayed family housing in the Wembley Quintain development. We will oppose evictions of tenants who have defaulted on rent payments because of the unfair bedroom tax.


Education We would strengthen the role of the local authority and its accountability in terms of school improvement and Special Educational Needs provision and campaign for it to be able to build new schools where needed, rather than rely on the costly and undemocratic free schools and academies. We will support the emerging collaborative arrangements between schools that aim to improve the quality of teaching and learning across the borough.


Green Spaces Brent’s increasing population makes green and urban open space even more important and extreme weather requires flood management for Brent’s streams and rivers. We will defend those green open spaces where they exist and insist on their sustainable maintenance as well as supporting the creation of new pocket parks and town squares. New developments will be required to provide play spaces for children and growing spaces for residents. The new Chalkhill Park has shown what a major impact a green space can make on a community both environmentally and in terms of bringing a community together.


Libraries We will press for restoration of accessible local libraries across the borough.
Posted by Martin Francis at 10:55:00

I'm trying to find some information about my ward's (kenton) green candidate Graham Allen... but can't find ANYTHING about him. Any info would be appreciated i.e. background, time in local government / politics, interests, motivations to stand as a candidate.

Thanks. I have passed on your request to our elections co-ordinator but as it is polling day he may be pretty busy...

This is what was submitted to local papers from him: Graham Allen, practising psychotherapist. Biggest issues: The rise of the motor car is a constant bane for cyclists like myself and for pedestrians. Solutions: Greens have been pivotal in the development of 20mph zones across London and improvements in road layouts for cyclists and pedestrians. We would push for more such roads to be rolled out on roads where people live, work and shop.

Sorry can't do more now as off to the polling stations.

did post my thanks... but thanks again... especially as you went the extra distance for me.

Do wish you well today.

And what does Brian Orr (in Stonebridge ward) say about himself, please?