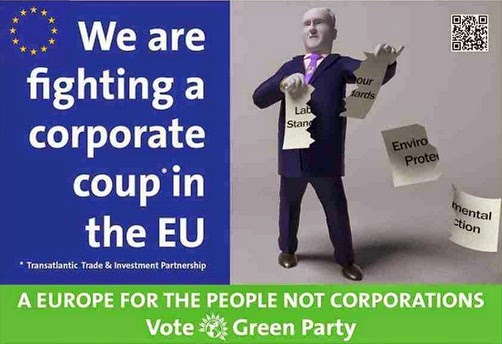 Brent Labour councillor Claudia Hector has said she will not vote Labour in the European elections on May 22nd because of Labour's lack of concern over the Transatlantic Trade and Investment Partnership (TTIP). The TTIP would open up public services to privatisation and un dermine workers' rights. In a Twitter exchange Cllr Hector expressed frustration at Labour Mep Calude Moraes' failure to engage on the issue:

At the Green Party's Spring Conference, leader Natalie Bennett had this to say about the TTIP:


TTIP is a huge threat to hard-fought-standards for the quality and safety of our food, the sources of our energy and our privacy and risks undoing decades worth of EU progress on issues like worker’s rights.”

Bennett stated that the proposed deal threatened to “blow apart the power of our democratic decision making.” She raised the spectre of the Edward Snowden revelations to demonstrate that the US state was “profoundly untrustworthy”.

It’s not surprising, really, when we hear Lib Dems trumpeting the proposed US-EU free trade deal as some kind of economic saviour. The Lib Dems are the lapdogs of corporate Europe, while the Tories are its war horses. In their support for the trade deal, the Lib Dems are reiterating the propaganda of multinational companies interested only in swallowing up new markets, consuming new societies whole.

Let’s make no mistake, the proposed free trade deal is a huge threat to hard-fought-for standards for the quality and safety of our food, the sources of our energy, workers’ rights and our privacy. One of the great contributions of the EU is to set a foundation of these standards – not good enough, not high enough – but a start. The proposed free trade deal is a supertanker of dynamite that would blow those foundations apart.

And more, it would blow apart the power of our democratic decision making. The deal provides corporations with new rights to sue the Government for legislating in the public interest – that’s definitely not acting for the common good.

The banking lobby is so happy with the financial services proposals it has said that the text could have come straight from its own brochure – that’s acting in the interests of the 1%, not the common good.

And there’s more. It’s a deal being proposed with a state that the bravery of Edward Snowden demonstrated is profoundly untrustworthy. Yet there’s no openness – no democracy – about the negotiations: the mandate that the EU Council gave to the Commission is still classified as ‘secret’.

My ignorance is my own fault but I know nothing about this and I'm reasonably well-informed. Well done for publicising it, Martin, and well done Claudia Hector for demonstrating that Labour people still do things sometimes. Could someone please take this opportunity to inform the uninformed like me on the when, what and how of this threat?

Greens couldn't agree with you more, Claudia. Across Europe we have been raising the alarm about the impending threat of greater protections for corporate interests above the citizens, a proposal for the former to receive their own "litigation rights"?. See Green party leaks confidential TTIP paper. Think how all this could affect not just marketisation of the NHS but environmental damages against shale gas contractors? On Sat 17 May, you should ask these questions to Green Shahrar Ali and Labour Claude Moraes at EU hustings

Why nothing from 38 Degrees?

Pity Councillor Claudia Hector does not speak up loud and clear about local issues.

How about speaking up against the privatisation of Kensal Rise Library ?

Get your facts straight. Claudia Hector was one of very few councillors to speak out against the library closure - one of the reasons she was reselected by the local party branch to stand. Others responsible for the policy like James Powney were deselected. WE NEED MORE COUNCILLORS LIKE CLAUDIA!

Does Councillor Claudia Hector support the current planning application that results in a privatisation of a community asset of old Kensal Rise library ?

Seems double standards if she can claim the current deal for Kendal Rise is the best deal and now supports privatisation of Kensal rise library rather than seeking a compulsory purchase and return the building to the community.

If Councillor Hector stood up for public assets by public declaring her current stance on Kensal Rise then I would agree she is true to her word if she declared the current deal not in the interest of the local community.

Until then the jury is Out !

She still voted for the closure though.

Yes we do need more councillors like Claudia - ones who are not voting Labour!

Who could even vote Labour now as they don't stand for ordinary people.

Councillor Hector has deleted the tweets now, can't think why. Luckily they have been immortalised by this blog.