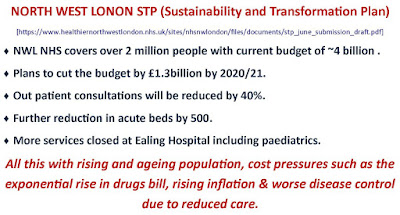 Robin Sharp of Brent Patient Voice has submitted a critique to Carolyn Downs (Brent Council CEO) and others responsible for the NW London Sustainability and Transformation Plan (STP) which will have a major impact on health provision for years to come.

This is Robin's covering email:

I am pleased to enclose for your consideration a critique by Brent Patient Voice of the draft NW London Sustainability and Transformation Plan of 30 June 2016, as placed on the NW London Collaboration website on 5 August.

You will see that this is a long document, though by no means as long as the draft STP.

Rather than simply complain about the proposed cuts in finance and services, as would be tempting, we have spent quite a lot of time examining the document in detail. This has been challenging because so much critical information has been withheld.

Nevertheless our conclusion is that at the level of detail the Plan, if it is a plan, does not withstand scrutiny and in that sense is not fit for purpose.

This is disappointing, though we do understand that the haste of preparation and the non-involvement of clinicians, councillors, CCG Governing Bodies and the public were ordained by NHS England.

We are asking you to advise NHS leaders to slow down this process dramatically and to open up the issues of radical change to primary care to doctors themselves and the public.  Surely it must be obvious even to the top of the NHS that this will not work without substantial consent?

We understand that you are ready to share with the public the next version of the STP shortly after 21st October. We urge the relevant bodies not to sign any agreement or contract by 23 December without fulfilling both the letter and the spirit of the law requiring the involvement of and consultation with the public in major changes to the provision of healthcare or without explaining how the bodies involved can lawfully commit to these plans. We also believe that the STP relies on a level and type of data sharing that has neither the consent of the public, nor the sanction of data protection law, and that the latest National Data Guardian review is unlikely to resolve this.