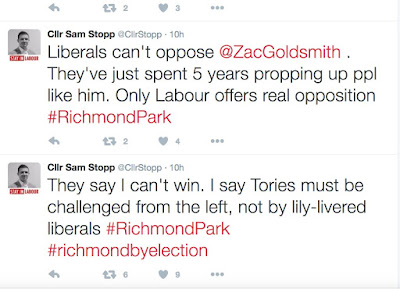 So forget about doing the job for Wembley Central Ward, well he hasn't really done anything has he perhaps he will trigger a by-election here then. If Richmond labour party want a reference from Labour voters in Wembley Central I wonder if they'll find anyone! er no I don't think so. Heard the Zac Goldsmith will stand as an independent this time round?

I'm not a Heathrow supporter but Stopp has built a respectable reputation for his work on homelessness. Richmond could do am awful lot worse.

Cllr Stopp clearly has an unerring eye for a lost cause. Labour got 12% of the vote in Richmond Park in 2015. Lib Dems got not that much more but in previous years (until 2010), they held the seat. Goldsmith is a pretty face with some superficial green credentials (he smokes roll-ups) and he opposes Heathrow expansion. He also ran a dirty, racist mayoral campaign against an increasingly popular Labour mayor. He's also pro-Brexit (it's in the blood, father Jimmy founded the proto-Ukip 'Referendum Party') in an area where 65% voted Remain. He's been endorsed by Ukip as they're not standing. The effect of that in this area will be totally negative. He's a spent force in the Tory party and without influence. He's probably hoping to lose so he can find something more agreeable to do with his time.
The Labour party activists in the constituency are Corbynist and Mr Stopp's record ain't gonna appeal. In any case, Labour voters in the area have voted tactically whenever there's been a chance of the anti-Tory vote being successful and it's been shown in the past that it can be successful. Voters will realise that an outside chance of reducing the majority of a May/Johnson/Fox, Davis(and Davies)/Rudd/Leadsom etc etc government is a much better bet than voting for a Labour party historically failing in the polls with the hope of pushing their vote share up to 13%.Anyone here voting with their brain rather than their heart (or arse) knows what to do next month.
Sam, I wouldn't bother buying a new suit. Just give the old one a press.

PS And why does Heathrow expansion give more 'growth and jobs'? Would a bigger Gatwick build and staff itself?

Sam Stopp has now deleted all his tweets between May and the the lay few days. Those would be the tweets where he was virulently ant-Corbyn and hailed Owen Smith as Labour''s saviour. Does he really think he'll fool Richmond Corbynistas into voting for him?

What is his connection to Richmond please? Local councillors should be "homegrown" not imported career politicians.