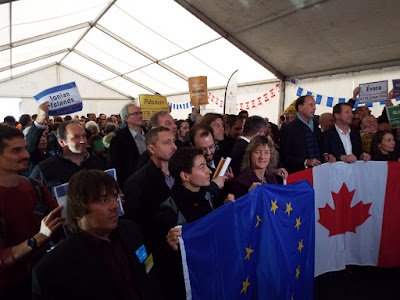 Keith Taylor, Green MEP for the South East, has cautiously welcomed the news that a summit of EU leaders in Brussels has ended without any sign of a breakthrough on the controversial EU-Canada trade deal (CETA).

Taylor, who sits on the European Parliament's Environment Committee and is a staunch opponent of CETA and its well-known cousin TTIP, said:


Today's failure to agree a deal on CETA at the second time of asking this week is cause for celebration; the toxic trade deal is unravelling. But the deal isn't dead yet. Greens will stand with citizens across Europe until this controversial accord is defeated.

Put simply; CETA is a bad deal for the people of Britain, Europe, and even Canada, but a great deal for multinational corporations keen to escape the democratic oversight of national parliaments. It is little wonder that citizens across Europe and in North America are the loudest and more determined opponents of this toxic trade deal.

'We ordinary people should not be the slaves of puppet governments that work for the benefit of the multinational.' So came the rallying cry of one citizen outside the European Parliament yesterday. Inside, decision makers were busy trying to find a way to resurrect the lame duck accord.

The deal, and particularly the 'Investment Court System' clause within it, poses a fundamental democratic question: do we want national parliaments to retain the power to legislate on behalf of their citizens or do we want to surrender that power to help boost the profit margins of multinational corporations? As a Green, the answer is clear; which is why I will continue working to halt this corporate power grab.

That Theresa May and her Ministers are still vehemently supporting the deal and pushing for it to be signed before Britain leaves the European Union is doubly concerning. It signals a desire to ensure Britain remains bound by the deal even after departing from the EU. It also sets a worrying precedent for the kinds of toxic trade deals desperate Ministers, supposed to be acting on behalf of the British people, will sign once the UK is outside of the EU.