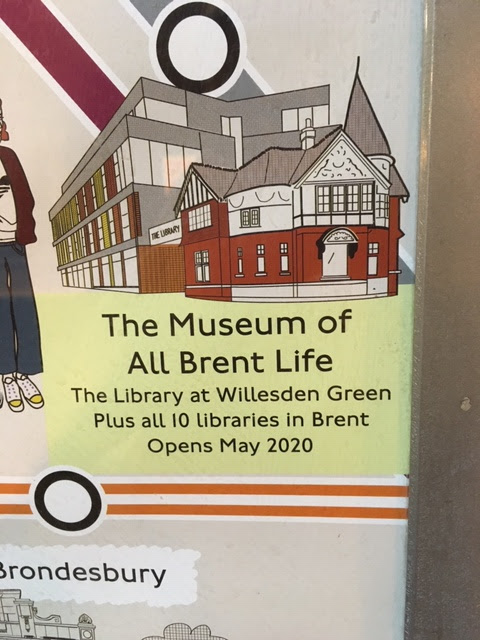 Paul Lorber, of the volunteer-run Barham library has challenged Brent Council over posters which appear to suggest that the council run ten libraries.

The posters about Borough of Culture at London Underground Stations has been drawn to my attention especially this item about 10 libraries in Brent.The implication is that Brent Council runs 10 Libraries which of course is not the case.Brent Council could have done so but Labour Councillors decides almost 10 years ago (2020 is the 10th anniversary) to close 6 (half) of its public libraries.They also refused to hand over the 6 library buildings (many of them donated and free of rent commitments) to local people who volunteered to run them.In the case of Barham every effort possible was made to deny the building donated by Titus Barham to the local community. It is only through our hard work that we managed to get back into a much smaller building in another part - for which (the only one if the 4 community libraries) Brent charges us a rent.While we have agreed to participate with the Borough of Culture 2020 we are doing this for the benefit of our community.We do not however want our position misrepresented or for Brent Council to imply that they are running or managing 10 libraries in Brent - which is clearly not the case.In view of this can you please arrange for the Posters (and any other references to libraries in Brent) to be changed to reflect the true position.The correct description is 6 Council run Libraries plus 4 Community Libraries run by local volunteers.I would appreciate an early confirmation that this change will be made.ThanksPaul Lorber
Posted by Martin Francis at 16:06:00

The poster claims that "The Museum of All Brent Life" opens in May 2020 (although part of it is already open - see below!), and the "events" information on the Brent2020 website says this about it:

'Libraries in Brent have been working with artists to explore stories, myths, dreams, hope and fears. On 16 & 17 May, these exhibits will be collectively launched as ‘The Museum of all Brent Life’.

There will be guided tours, talks by artists and supported transport between libraries enabling visitors to experience all ‘wings’ of the museum.

Programme to be announced.'

Brent2020 appear to be using the term 'Libraries in Brent' to cover both their own 6 libraries and the 4 community libraries, run by volunteers, such as Barham. I can see why Paul feels that is misleading.

I said above that part of "The Museum of All Brent Life" is already open. That is the display at Kingsbury Library, which opened on 3 February 2020, and was publicised in the blog "Celebrating the Architecture of Ernest Trobridge in Kingsbury" a few days later.

As early as March 2019, Council Heritage and Libraries officers approached local history societies and others, seeking help in putting on events that would deliver the promise in Brent's bid to be London Borough of Culture, to have a "Museum of All Brent Life" on show at libraries across the borough in 2020.

In response to this, I put forward a proposal for a small Ernest Trobridge exhibition, with self-guided walks information so that residents and visitors could go out and enjoy seeing some of the many remarkable homes he designed in the local area. I worked with Brent Museum to deliver that, and it will be at Kingsbury Library until 26 July.

Other ideas put forward, by a variety of people and groups, such as a walk through Wembley's history that you could follow with your 'phone, or a period film show and tea for elderly residents, to celebrate the 75th anniversary of the end of WW2, were either dismissed or were refused money from the Culture Fund.

Towards the end of 2019, those by then appointed to take charge of Brent2020 decided to restrict the "Museum of All Brent Life" branding to just the 10 artistic works, one at each of the ten Council or community libraries. Despite this, the Trobridge exhibition that I had put together with Brent for 2020 was still supposed to be part of LBOC2020, and the poster for it shows that logo.

However, you will not find details about the Trobridge exhibition at Kingsbury Library on the Brent2020 website yet. I have been pressing for this publicity, which would include online material that can't be made available in the library, since late last year, when details for the exhibition were finalised.

For many weeks, I received no response at all. Then I got a brief reply to say they were dealing with it, but nothing else happened. I raised the matter with Brent's Lead Member for Culture, when we met at the reveal of three tile mural scenes in Olympic Way on 18 January, and he said that he would "sort it".

After further chasing in early February, I received another promise from Brent2020 that it was being dealt with, and that their communications team would be in touch with me shortly. It is now March, and still nothing!

It is not surprising that there is a growing feeling among local people interested in the history of our borough, the stories and relics of which can be shared and enjoyed by everyone who has made Brent their home (and is enjoyed by many), that the Council and Brent2020 in particular, have little interest in the heritage side of Brent's culture.

Nice picture of Willesden Green Library on the poster, Brent.

Just as well we stopped you knocking down the beautiful Victorian building at the front!!!

Please go to the ASA with this. Clear breach of advertising standards.