Love Where You Live - the Bobby Moore Bridge tile murals 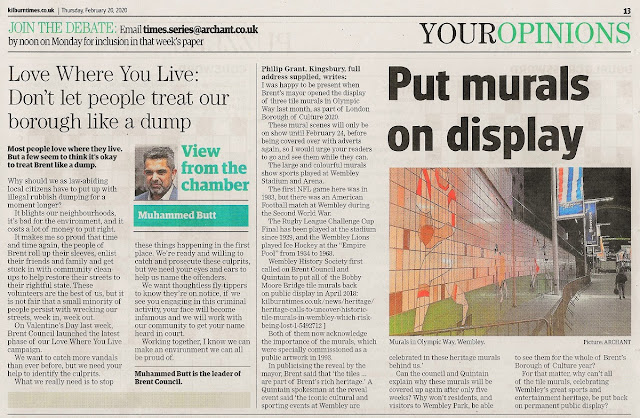 Love Where You Live - the Bobby Moore Bridge tile murals.  This is an open email.

​By chance, a letter that I wrote to the "Brent & Kilburn Times" (urging readers to go and see, by 24 February, the three tile murals which were "revealed" on 18 January) has been published today alongside your article, urging readers to Love Where You Live.

Like most of my fellow law-abiding local citizens, I abhor illegal rubbish dumping as much as you do. But there is more to having an environment that residents can love living in than just fighting against litter.

Having beautiful surroundings, that give you a sense of pride in where you live, and encourage you to look after that place for others to enjoy as well, is another important factor. That is why, for the past couple of years, I have been working with colleagues in the Wembley History Society, and with a growing number of residents who have told me that they love the tile murals at Wembley Park, to try to get this Council-owned heritage artwork put back on public display.

I realise that most of the murals are currently covered over with advertisements, or with light panels which can be used for displaying advertisements. This is as a result of a lease of the Bobby Moore Bridge to Wembley Park Limited, which you and your Cabinet agreed to in January 2018. However, the Officer's Report on which you based that decision did not mention the murals, or disclose that the advertising rights were over walls with these tile murals on them, so that there was no consideration of the heritage value of the Council asset that you were being asked to sign away control over.

The current lease expires in August 2021, and I would ask you to give a commitment now, that when any renewal of advertising rights on the walls containing the Bobby Moore Bridge tile murals comes before Cabinet again, the Report must include a proper description of the murals involved, and a fair assessment of their heritage value, so that any decision is based on the full facts.

I believe that it would be possible for the Council to receive a worthwhile advertising income from the Bobby Moore Bridge, while still allowing the tile murals, or at least most of them, to be put back on permanent public display. So that the possible options which could deliver this outcome can be properly considered, I would ask you to notify Brent's Chief Executive, and confirm publicly, that you support the following suggestion:

My suggestion is that, within the next six months, a Senior Council Officer should meet with me, and any other representatives of Wembley History Society or local residents who wish to be involved, to discuss ways that the murals can be displayed again, while the Bobby Moore Bridge still produces advertising income for Brent Council. If those discussions produce a viable plan for a way forward, that plan should be implemented in good time before the current advertising lease expires on 30 August 2021, so that the Cabinet can choose what it considers the best option for the Bobby Moore Bridge from that date onwards.

With the "reveal" of some of the murals for LBOC 2020, Brent has finally acknowledged that these scenes from famous sports and entertainment events at the Stadium and Arena 'are part of Brent’s rich heritage'. Now we need to build on that, to help Wembley Park residents, old and new, to Love Where They Live.

Let me end by echoing the closing words of your "View from the chamber" article, which I endorse: 'Working together, I know we can make an environment we can all be proud of.’

I look forward to receiving a positive response from you. Best wishes,