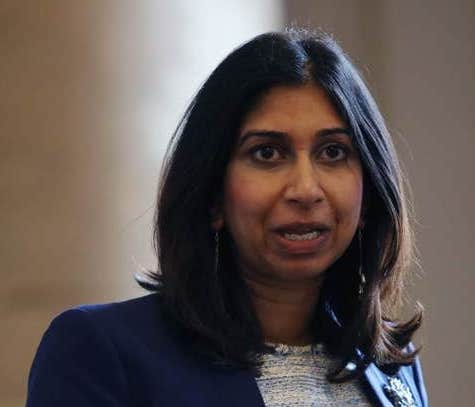 Following Boris Johnson's appointment of Suella Braverman (nee Fernandes) as attorney general (shortly after she attacked judges as unelected and unaccountable) it is interesting to hear from someone who was at school with her in the 1990s:

Sue Ellen Fernandes (who prefers to be known as Suella, so as not to be compared to a character in the 1980's TV series "Dallas") grew up in Kenton.

Her mother was a Conservative councillor on Brent Council, Uma Fernandes (who, as a candidate for Parliament, managed third place in the Brent East by-election won by Sarah Teather in 2003).

By the sixth form at school, Suella was open about her ambition to be a Conservative M.P., and to become Prime Minister, like her idol, Margaret Thatcher.

She studied law at Cambridge, and went on to become a barrister, specialising in planning law, but also spending time trying to get selected as a Conservative Parliamentary candidate.

One of the roles that helped on her Tory CV was acting as Chair of Governors for Katherine Birbalsingh's Michaela Community School LINK, although her knowledge of planning law did not seem to cover the fact that consent was needed to display a large advertisement over its building in Wembley Park LINK:

The advert had to be taken down after a few days - a waste of taxpayers money that could have been avoided!

Suella was elected for the "safe" Conservative seat of Fareham in Hampshire in 2015. Now, at the age of 39, this "aspirational" junior barrister has been appointed by Boris Johnson as the Government's top legal adviser.