Deadline 24 February – your only chance to see the tile murals in 2020! 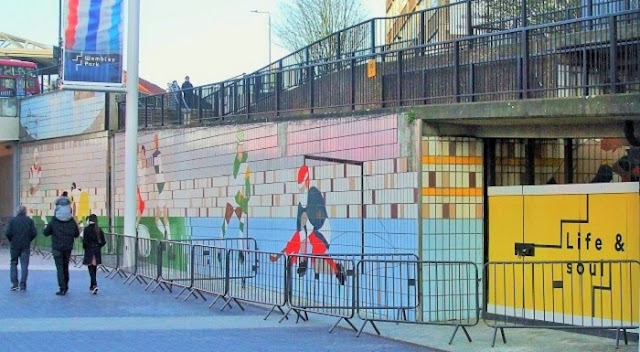 Guest blog by Philip Grant in a personal capacity:

I wrote last month about the “reveal” by Brent Council and Quintain of three of the Bobby Moore Bridge tile mural scenes in Olympic Way, as part of Brent’s London Borough of Culture 2020 celebrations. LINK

On 2 February, Martin added a comment he had received via email to that blog. The points which Elisabeth had made echoed what I and many other local people feel, and prompted me to write a joint email to the Cultural Director of Quintain’s Wembley Park Arts organisation and Brent’s Chief Executive (full text as a comment on the previous blog). My email finished with:

‘I hope that Quintain / Wembley Park and Brent Council will reconsider plans to put adverts over the revealed tile mural scenes again after 24 February. Please leave them uncovered for at least the remainder of 2020, or if that is not considered possible, please announce future dates during LBOC 2020 when these tile murals will be on public display again.’

I have now received a reply (from Wembley Park, but not from Brent). While it says that ‘Quintain and Brent Council have an agreement to reveal the south eastern tiles for a specific amount of time each year,’ it goes on to say:

‘… this year the tiles are being unveiled for 38 days in January and February to ensure residents and visitors have the opportunity to view the installation.’

I asked whether this meant that there would be no further display of these mural scenes during 2020, and the answer was “Yes” it did. So, 38 days out of 366 (yes, it’s a leap year) in LBOC 2020 in which to see this part of Brent’s cultural heritage. If you don’t see them by Monday 24 February, there won’t be another chance this year.

It appeared that being the London Borough of Culture had made Brent Council and Quintain finally acknowledge the cultural and heritage importance of these tile murals. I had been encouraged by statements made on behalf of both organisations when the Mayor of Brent conducted the “reveal” on 18 January, as a prelude to the LBOC 2020 “RISE” event later that day. 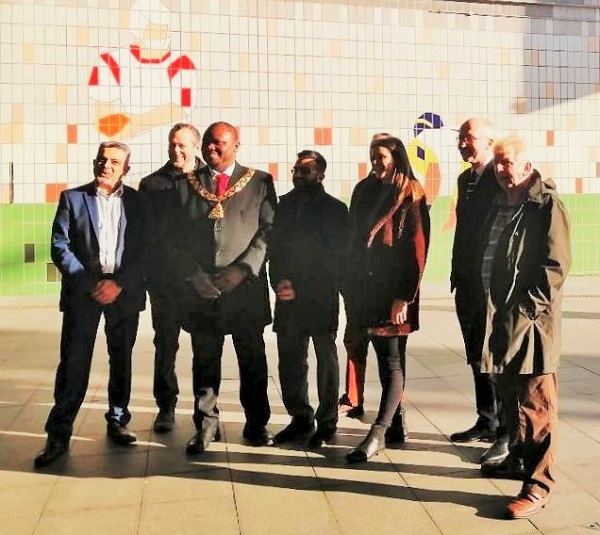 All smiles from Brent Council and Quintain at the tile murals “reveal” on 18 January.
(Photo by Francis Waddington, Wembley History Society)

At the reveal event Julian Tollast, on behalf of Quintain, said:

‘The iconic cultural and sporting events at Wembley are celebrated in these heritage tiles behind us, and we are really proud to work with Brent and with Wembley History Society to make the reveal on a periodic basis of these murals possible.'

‘The tiles, which show scenes from famous sports and entertainment events at Wembley Stadium and the SSE Arena, Wembley, are part of Brent’s rich heritage and date back to September 1993 when they were originally dedicated to the legendary footballer.’

It is now clear that their enthusiasm for Brent’s rich heritage is subject to the proviso that it ‘does not restrict commercial opportunities that benefit both parties.’

It appears that these “commercial opportunities” may also extend to the occasional covering up of the “footballers” mural in the subway. That mural scene was put back on “permanent” public display in the autumn of 2019, following the approval of Quintain’s planning applications LINK as a gesture towards the heritage significance of the murals. Quintain’s application had promised that:

‘a 9.4m long section of the original tiled mural located on the east wall and referencing England footballers and the Wembley ‘twin towers’ will remain uncovered and visible to the general public.’ 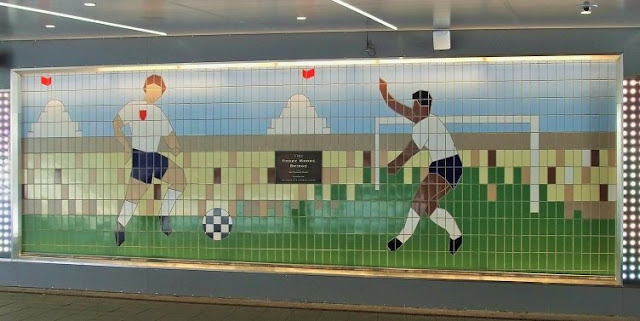 The reply I received from Wembley Park included the statement: ‘Quintain has committed to make this scene visible at all times with the exception of a small number of stadium event days.’ When I asked for clarification, the response was:

‘ These tiles may be covered up for events held at Wembley Stadium, such as the NFL games, UEFA events and concerts. As of today, there aren’t plans to cover them up until potentially the NFL games in late October.’

It seems that Quintain and Brent Council would be prepared to cover up this iconic England footballers mural, even during England’s Euro 2020 matches at Wembley Stadium, if “the price is right”. For the NFL games at the stadium this autumn, they would be willing to cover up the “soccer” mural, but not put back on display the American Footballers scene!

I will give the final words on this situation to a lady who emailed me this week, in response to my recent blog on the Bobby Moore Bridge tile murals. She has lived in Wembley for more than sixty years, and with her late husband had been to many events at the Stadium and Arena, including the Wembley Lions last ice hockey match in 1968:

‘As Brent is supposed to be the London Borough of Culture, I am appalled that our sporting heritage murals are to be covered by advertisements.’