Celebrating the architecture of Ernest Trobridge in Kingsbury

Many thanks to Philip Grant for this fascinating Guest Post

In February 1920, Ernest Trobridge displayed his design for a “home fit for heroes” as a show house at the Ideal Home Exhibition. In a leaflet he claimed that ‘this type of house is the most progressive step yet made towards meeting the present urgent demand for houses.’ It would provide ‘maximum convenience, comfort, and life of structure; minimum expenditure of costs and time for erection.’ LINK  Trobridge’s new design of house would be made from green elm wood, with a thatched roof! 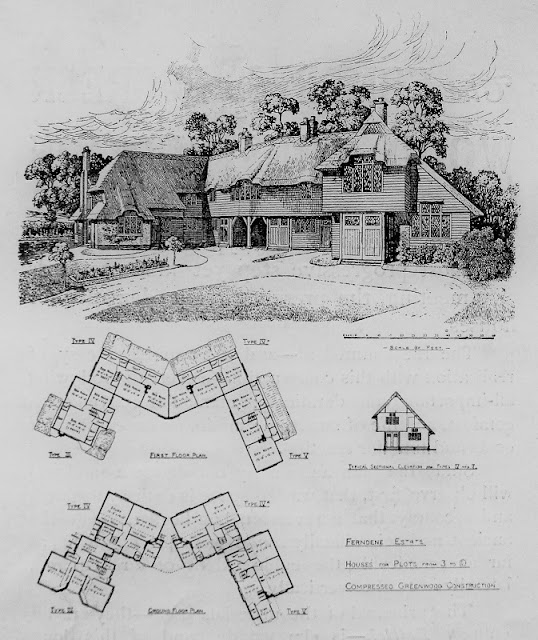 Trobridge had moved to Kingsbury in 1915, and developed his ideas while growing food on a smallholding in Hay Lane, to feed his vegetarian family during the First World War. He had already bought a small field, at the corner of Kingsbury Road and Slough Lane, ready to build his houses. Some of them are still there today, as Grade II listed buildings. The centenary of his Ferndene Estate, coinciding with Brent’s year as London Borough of Culture, seemed an ideal time to celebrate this architect’s remarkable work.

Ernest Trobridge had strong New Church beliefs, and could probably be described as a Christian Socialist. He wanted to provide beautiful and comfortable homes that ordinary people could afford. He planned for some of the homes to be sold to ex-servicemen and their families, and employed and trained disabled ex-servicemen to use the construction method he had developed and patented. He always paid his workers at trade union rates.

Unfortunately, Trobridge’s plans for the Ferndene Estate did not go smoothly. The field he bought had been the paddock of a Victorian mansion, and there was opposition from the owners of neighbouring mansions to the style and density of the homes he wanted to build:

‘I do not consider that the type of cottage proposed is at all in keeping with the character of the neighbourhood. On the contrary, the value of my property would be seriously depreciated if cottages such as these were to be erected.’

The local Council delayed planning approval, because of density and fire risk concerns. In addition to this, the promised government subsidies, which should have made his homes affordable, were blocked by the House of Lords. In the end, he was only able to build ten detached timber homes on the estate, costing at least £600 each, rather than twenty-four at £300 each.

The “failure” of Trobridge’s first Kingsbury development led to him being made bankrupt, but he pressed on with plans for the Elmwood Estate (at the corner of Hay Lane and Stag Lane) in 1922, financed by a wealthy New Church backer. A group of four thatched timber houses from this estate still survives.

Trobridge continued to live and work in Kingsbury until his death in 1942, designing homes for private clients, and for the Kingsbury Cross Co-Partnership, which he helped to set up in 1929. Every one of his buildings was individually designed, and very different from the work of other architects of his time. His “castle” blocks of flats gave a sense of protection, as well as many useful practical features. That desire to protect produced some remarkable plans in 1938, for homes with built-in air raid shelters, even though they were never built! LINK

There are more than 200 homes in Kingsbury that Trobridge designed, which are still lived in today. One of the aims of the exhibition is to encourage you to go and look at some of his extraordinary architecture (while remembering that these buildings are peoples’ homes, so respecting their privacy).

Please make time, between now and 26th July, to visit Kingsbury Library, see the exhibition, and pick up a free self-guided walk leaflet (or two), so that you can go out and enjoy Trobridge’s beautiful designs for yourself. Kingsbury is easy to get to, either on the Jubilee Line, or a number of different bus routes (79, 183, 204, 303 or 324). It used to be a separate Urban District, before becoming part of Wembley in 1934, and is now very much part of Brent, the Borough of Culture(s).