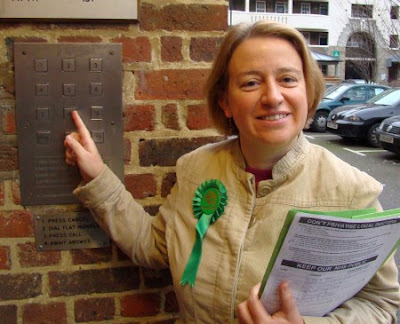 Natalie Bennett has been elected the new leader of the Green Party of England and Wales.  Bennet is a former journalist, most recently editing the Guardian Weekly and is a member of Camden Green Party.  She is founding chair of Green Parry Women.

Her election statement included the following:


Our current economic model is broken. It doesn't work even in its own terms, and is built on treating the planets as a mine and a dumping ground, while treating the poor like rubbish.

We have a vision for a balanced sustainable;e society, with a living wage and decent benefits, fair taxes, and a restructured, low-carbon economy.  It's a radical, distinct vision.

I will publish the deputy leadership result a soon as I can. To retain gender equality it must go to a male candidate (or RON - who is possibly male!)
Posted by Martin Francis at 11:43:00

Thank you for this, Martin.

I wonder now about the Deputy Leader election result.