My Aunt Muriel was a farm labourer at different farms around Kingsbury and Edgware so I am pleased to publish this Guest Blog by local historian Philip Grant about a dig at Blackbird Hill Farm just around the corner from where she used to live.

We still need to save Brent's remaining farm building at Old Oxgate Farm in recognition of  Brent's agricultural past.

Planners are often criticised for the developments they allow to be built, but sometimes they deserve some praise. For two weeks from Monday 9 September, behind the blue hoardings opposite the Lidl supermarket on Blackbird Hill, archaeologists from UCL will be working to uncover clues from the past of a historic site. A block of flats will be built soon where the “Blarney Stone” (formerly “The Blackbirds”) public house stood, but for hundreds of years before the pub was built in the 1950’s, there was a farm here.

When the controversial planning application to redevelop the pub was submitted in 2010, Brent’s planning officers identified that this was a site with archaeological potential. A desk-based assessment of this potential was required as part of the application documents, and after representations were made on behalf of both Brent Museum and Wembley History Society, officers recommended that a proper excavation should be carried out on the part of the site before the new development could go ahead.


Blackbird Farm was only an old farm, so why is this excavation so important? In 1952, an old “mansion” opposite Kingsbury Green was demolished to make way for blocks of Wembley Council flats (Mead Court). After the bulldozers had cleared the site, bits of old pottery, some medieval and two large fragments of Roman amphorae, were found in the heaps of earth. Had they been buried for up to 1,900 years, or were they items collected only a century or two before by a previous occupant of the property? It was too late to find out, and a key opportunity to learn more about our distant past was lost.

There were farm buildings on the “Blackbirds” site from at least the sixteenth century, and there may be even older material buried here which could tell us about the lives of Kingsbury’s earliest inhabitants. Blackbird Hill was part of a track which was known as “Eldestrete” (the old road) in Saxon times. When the nearby St Andrew’s Old Church was built around AD1100, rubble from the Roman period was used in its walls, so there may have been a building in this area nearly two thousand years ago. 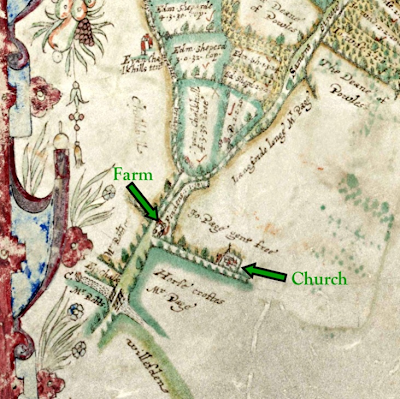 An extract from the 1597 Hovenden Map, showing the farm, then called Findens and the surrounding area (note that north is on  the right hand side, not at the top).(Source and copyright: The Codrington Library, All Souls’ College, Oxford)

Although part of the farmyard site was destroyed when the pub was built, there is an area close to Old Church Lane which is relatively undisturbed, and that is where the archaeologists will be excavating. There is no guarantee that they will discover anything of significance, but this is the last chance to find whatever is there before an underground car park is constructed for the flats.

Whatever is found, properly identified and interpreted, will help to fill gaps in our knowledge of local history.

Wembley History Society and Brent Archives had hoped to arrange with the archaeologists for an open afternoon, when local people could come and see the “dig” for themselves. Unfortunately this has not proved possible, as this is an active construction site, with other contractors at work, so the developer will not allow public access for safety reasons. We will make sure, however, that any information about what is found is made publicly available, so that the efforts of local planning officers and heritage enthusiasts to bring about this excavation are not wasted.

You can discover more about the history of the Blackbird Farm site in an illustrated article from the Brent Archives online local history resources collection HERE
Posted by Martin Francis at 16:23:00