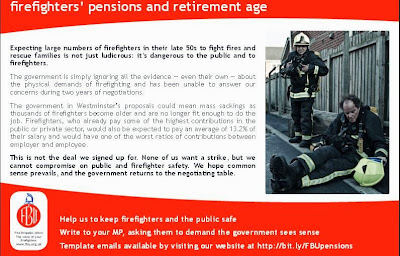 BBC London News revealed last night that 12 tenders dealt with Monday's bio-chemical fire in Park Royal. They said that this was about half the tenders that will be available for the whole of London during today's four hour strike.

The FBU is striking over the later pension age and the danger that represents for both fire fighters and the public. Similarly teachers have been arguing in their 'Too late at 68' campaign that the stresses and strains of teaching means that later retirement is good for neither teachers themselves nor their pupils.

Teachers in London  are due to strike on October 17th.