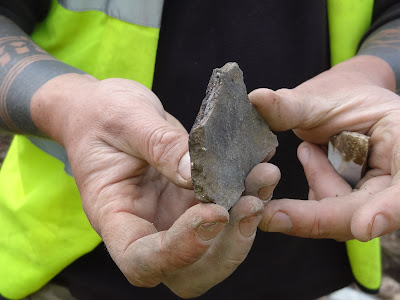 It seems a long step from the Lidl supermarket on one side of Blackbird Hill in Kingsbury and a possible iron age settlement on the other, but that is the possibility revealed by the archaeological dig taking place on the site of the demolished Blarney Stone pub, previously the Blackbird.

This was the site of Blackbird Farm or Blackbird Hill Farm, perhaps also known as Black Pot Farm, which occupied the site on Blackburd Hill for centuries: 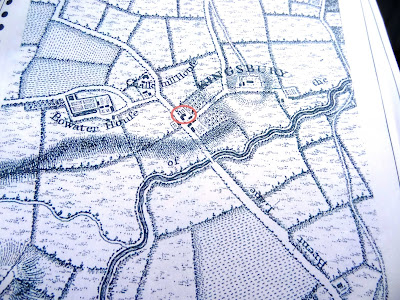 Just how long a farm stood there may be answered by the dig which is in its last fortnight. We know it was there in 1597 but not how long before that.  The archaeologists have got back to a packed clay floor which still has to be dated and a 16th century drain.

Most of the rest of the building appears to be 18th century and some post medieval red pottery has been found.

The site is beside the Saxon Eldestrete track which is thought to have run from Westminster, through Willesden and Neasden, to what is now Fryent Country Park and on to Hertfordshire. There are still remains of the track in the country park. It is conjectured that there may well have been settlements off the track. Furthermore, the finding of some Roman remains at the nearby Old St Andrew's Church has even raised hopes of some evidence of a Roman villa but that is really an outside chance. So far in London villas have only been found in the City of London itself or on the outskirts of Greater London.

More will be revealed (perhaps) when the layer so far uncovered is removed to see what lies beneath.

The remains will be recorded and stored in archives before the site is  built on to provide 34 flats, two houses and an underground car park.

I am grateful to UCL and the Wembley History Society for inviting me to visit the site.